"You bought yourself a ticket to the cemetery"

The President of Federation of hockey, banker Sergei Mendeleyev had fled from Russia 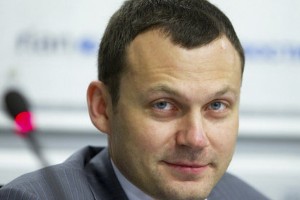 As it became known Rucriminal.info, President of the Moscow ice hockey Federation (FCM), banker Sergei Mendeleev hastily left Russia. And for this he has very serious reasons. First, Mendeleev is personally acquainted with the "top managers" of the banking Department of the FSB of the Russian Federation Dmitry Frolov and Kirill Cherkalin, who are under arrest. From Mendeleev want him to share information about the former counterintelligence, but it does not end well for him. Secondly, according to the sources Rucriminal.info Mendeleev participated in the laundering and withdrawal of tens of billions of rubles from Russia. These funds were stolen by the owners of GC "1520" from funds received under contracts with Russian Railways. Covered the business lines of force Dmitry Zakharchenko. In 2018, for bribery Zakharchenko charges were brought against co-owners of GC 1520 Valery Markelov and Boris Usherovich. The first was arrested, and the second went on the run and put on the international wanted list. After they "dropped out" of the game, according to our interlocutors, Mendeleev continued to engage in "laundering" and transit – Russian Railways contracts with 1520 continue to operate and the money goes to the civil code. However, recently the security services have engaged in embezzlement of railway funds. And this is extremely bad for Mendeleev. As a result, the banker chose to leave the country and return is not going to. After all, if he was behind bars, investigators can raise and older stories. For example, the story of the attempt on the banker Alexander Antonov. The latest in his statements, says that the attack has a direct bearing on Mendeleev. One of such applications is available Rucriminal.info:

"On March 11, 2009, an attempt was made on Antonov Alexander Yurievich, as a result of which he survived, but remained disabled. The perpetrators of this attempt were detained and convicted, but the customers have not yet been established.

Immediately after the assassination, Antonov A. Yu., together with his family was forced for security reasons to leave Russia, entrusting the management of banking business to one of his employees Mendeleev Sergey Vladimirovich, who is now Chairman of the Board AKB "Investbank". All the time while Antonov A. Yu. was on the territory of a foreign state Mendeleev S. V. convinced him about the need to re-register the shares of the Bank on it, allegedly, in order to prevent raider seizure of business.

Some time later, Antonov A. Yu agreed and in March 2011, the shares were reissued to periodic C. V. In December 2011, Antonov A. Yu appealed to Mendeleev C. V. with a request for return of Bank assets, but the latter refused in a rude manner, saying verbatim: "the last time we had not finished, will finish next time."

In turn to Antonov's son A. Yu. Antonov V. A. Menedeleev S. V. concerning return of Bank assets told: "It is now my property, and you have no relation to it.  But if you keep moving, and your father, and you still will finish, and no, London will not save you. And if you write a statement to the cops, it will mean that you bought a ticket to the cemetery."

In the course of communication with him, Antonov A. Yu., it became known that under the leadership of S. V. Mendeleev in AKB "Investbank" formed an illiquid loan portfolio, consisting of fictitious loans and technical firms (list attached) created or acquired by the Bank's management with the purpose of a fictitious increase of the share capital and theft of funds of clients and depositors. At the same time, the Bank's authorized capital was plundered by the Bank's management using feduciary credit schemes (Bank Winter (Austria), Bank Julius Meinl (Austria), Multiasset SA (Switzerland)).

Most of the money stolen by the above method Mendeleev S. V. has already brought through the technical and offshore structures controlled by him outside the Russian Federation, which threatens the Bank and its numerous depositors, including many individuals bankruptcy."