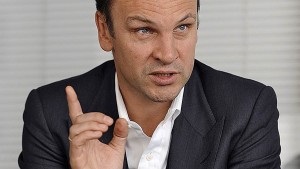 Read this text in Russian
Имя: Mikhail
Фамилия : Khabarov
Должность : First Deputy President and Chairman of the Board of the Trust Bank of Non-Сore Assets

Mikhail Khabarov was born March 12, 1971 in the city of Zlatoust, Chelyabinsk Oblast, Russia.

His parents were metallurgists who wanted their son to continue in the family business, but even as a child, Mikhail dreamed of more: “The material life of my parents didn’t impress me. I felt like I needed to do something else.” After graduating high school, he planned on moving to Moscow. His parents didn’t want him to leave, but they let him go on the condition that he would study at the Moscow Institute of Steel and Alloys.

In 1993, he graduated from the Moscow Institute of Steel and Alloys (MISiS) with a degree in Automation of Metallurgical Production.

In 1994, he completed studies at the Higher Commercial School under the Ministry of Foreign Economic Relations of the Russian Federation.

In 2001, he received an MBA from Pepperdine University (California, United States).

He began his career cleaning windows and also had a job selling ice cream.

Upon graduating from MISiS, he worked at the automation department of the Ministry of Metallurgy of the Russian Federation from 1993 to 1994.

In 1994, he became the chief manager of ferrous metallurgy at Inkombank for two years. In 1996, he transferred to the Magnitogorsk Steel financial and industrial group as deputy director for economics, finance, and strategic development. Inkombank and FPG were the largest shareholders of Magnitogorsk Iron and Steel Works, and Khabarov represented Inkombank in the management of Magnitogorsk. He played an important role in the privatization of the enterprise, which was accompanied by a number of scandals and criminal cases. He left for the United States in 1998 to avoid criminal prosecution.

From 2006 to 2010, he was chairman of the board and served as general director of the Alfa Capital management company.

On October 4, 2010, he became president of the A1 Investment Company, remaining in Alfa Capital as chairman of the board of directors. At the same time, he joined the supervisory board of the Alfa Group.

Khabarov started there with a statement about the need to sell the assets of the Avianova low-cost airline company, which he said was dead weight on Alfa Group's balance sheet. He accused the airline's managing director, who represented the interests of its partner A1, of abuse of authority and insisted on his removal. A1 abandoned its partnership obligations, and the airline was declared unprofitable and ceased to exist.

Under Khabarov's leadership, A1, known for its aggressive hostile takeovers, participated in a number of corporate conflicts, including with defense enterprises. In this case, it used traditional corporate-raider methods to pressure opponents, such as blackmail, courts, threats, etc. In the conflict over the Zarechnaya coal company, owned by state-owned Uralvagonzavod, Khabarov’s company threatened the company's management and members of the board of directors—senior officials and security officials—with US and EU sanctions.

Khabarov’s team put pressure on the main owners of the Kalmykov Factory of Calculating and Analytical Machines, Moscow (JSC PLANT SAM), which was on the verge of bankruptcy, forcing them to sell their shares. Experts explained the persistent interest of A1 in the plant as due to the possibility of selling its territories for development, while the company itself initially explained its plans as "normalizing the activities of JSC PLANT SAM by participating in the management of the plant." During the struggle for the asset, Acting General Director Vladimir Shulga was shot dead. As a result, the majority shareholders were forced to buy out A1’s share in order to neutralize it for a "more than attractive price."

Khabarov headed the investment company A1 until December 2014, when he also left the supervisory board of Alfa Group, explaining that he needed to move on.

Starting in 2015, he worked for a short time in the Business Lines transportation group of companies. Currently, Khabarov is chairman of the board of directors of the freight carrier and a co-owner, but the company has not confirmed this information.

In 2017, Khabarov had a conflict with the carrier’s founder as well as with the main shareholder at the time, Alexander Bogatikov. Khabarov accused Bogatikov of nonfulfillment of agreements and demanded the transfer of 30% of the shares of Business Lines through courts. Experts assessed the actions of Mikhail Khabarov as an attempt to take over the largest automobile cargo carrier. Khabarov brought A1 into the conflict.

This is not the first time Alfa Bank has taken part in the conflict over Business Lines.

While still president of A1, Khabarov bought out a block of shares from Sergey Demidov, cofounder of Business Lines, and then forced him to buy Bogatikov at an inflated cost.

On May 20, 2019, he was appointed Chief Executive Officer (CEO) of the Bank for Non-Core Assets (Trust Bank). According to some, this appointment was personally lobbied by President of the Trust Alexander Sokolov, who in turn was promoted by Mikhail Zadornov, chairman of the board of Otkritie FC Bank. It is known that Khabarov brought his team in from A1 to the state bank, particularly Philip Lerman, who assumed the post of financial director. Khabarov’s appointment, considered “a cross between a racketeer and a debt collector,” provoked a mixed reaction from the banking community.

On June 17, 2019, it became known that Khabarov was appointed First Deputy President and Chairman of Trust. Khabarov’s area of ​​responsibility at Trust Bank is management of distressed assets—in essence, debt collection. He is directly responsible for the main profile of the “bad-debt bank,” applying his “raider” skills acquired in A1 to the state bank.

For example, in fall 2019, the Trust team, managed by Khabarov, published a notice of intention to appeal to the court for declaring Otkritie FC Bank bankrupt. According to representatives from the firm, the company did not have any unfulfilled obligations that would legally allow it to file for bankruptcy. Khabarov used psychological pressure to achieve the most favorable conditions for himself.

Married with two daughters and a son.

He enjoys water skiing and skiing and is a serious poker player, taking part in professional tournaments of the World Poker Tour, European Poker Tour, etc.

In 2011, Khabarov entered into a corporate conflict over the possession of a disputed majority share of the Golden Island project on Sofiyskaya Embankment. A criminal case was opened against one of the participants in the conflict. The share went to his opponent, who immediately sold it to Khabarov’s company. At the end of 2013, A1 sold its stake with more than double profit.

In 2011, Khabarov’s team accused Avianov Airlines Managing Director Andrew Payne, who represented the interests of A1’s partner in the airline’s business, of exceeding his authority and insisted on his removal. According to the results of the audit initiated by A1, Avianova was declared unprofitable. The airline ceased operations and was declared bankrupt in April 2012.

In early 2012, Khabarov entered into negotiations to purchase a minority share of the A5 pharmacy chain from its owners, since they could not agree with the main owners on a price. The majority shareholders, knowing they would face a long confrontation with A1, chose to buy back the shares of the minority shareholders at a compromise price, and A1 received a corresponding bonus.

In September 2012, A1 entered into the corporate conflict of Gras shareholders, buying out a share of one of the participants in the conflict who could not come to an agreement with their partners on how to further develop the business. Khabarov put pressure on other owners of the company, demanding more transparency from them. The businessmen were not ready for this and within three months they were forced to redeem A1’s share for double the cost.

In July 2012, Khabarov’s team, as a minority shareholder, filed a lawsuit against the majority shareholders of the Kalmykov Factory of Calculating and Analytical Machines, Moscow (JSC PLANT SAM), which was on the verge of bankruptcy, with the aim of forcing them to sell their shares. Experts explained A1’s interest in the plant as being due to the possibility of redeveloping it, while the company itself initially voiced its plans as "normalizing the activities of JSC PLANT SAM by participating in the management of the plant and not confronting other shareholders about redeeming its share." During the conflict, the majority holders were forced to redeem A1's share in order to neutralize it at a "more than attractive price."

In spring 2013, Khabarov’s structure, as part of a consortium, entered into a corporate conflict for full control over the CEDC alcohol company, which was experiencing serious financial difficulties. Businessman Rustam Tariko, CEDC's largest shareholder, was the broker from the opposing side and, at a certain point, Khabarov threw his partners under the bus, announcing the collapse of the consortium and siding with Tariko. A1 granted Tariko a loan of $100 million, and he in turn consolidated a 100% stake in CEDC. Khabarov offered a simple explanation for his actions: “We quickly realized that you make trouble with Kaufman and money with Tariko.”

In February 2013, A1, led by Khabarov, entered into a dispute over the Zarechnaya coal company on the side of one of the co-owners. In response, another participant in the conflict sold Zarechnaya to the state-owned Uralvagonzavod. A1 challenged the deal, threatening the management of Uralvagonzavod (which included senior officials and security officials) with criminal prosecution and personal sanctions from the United States and European Union.

In a dispute over the return of debts to Alfa Bank by the Kopernik group of companies, Khabarov’s structure used corporate-raider tactics to pressure the debtor. In early 2013, Khabarov’s team, accompanied by a group of armed men, arrived at the company's business center and demanded that the building’s security guards be changed.

In 2017, Khabarov came into conflict with Alexander Bogatikov, founder of the carrier [Business Lines] and its main shareholder at the time. Khabarov has accused Bogatikov of non-fulfillment of agreements and is now demanding the transfer of 30% of the shares of Business Lines to him through the courts. Experts consider Mikhail Khabarov’s actions to be an attempt to take over the largest automobile cargo carrier.

As a result of the complete incompetence and inefficiency of Khabarov’s team at Trust Bank, most assets of the Russian Forest Group were lost for good, having lost liquidity. At the same time, Khabarov’s managers lied to the siloviki to achieve their own selfish goals, trying to gain control of the company using criminal cases.

In fall 2019, a team from Trust, led by Khabarov and employing his pressure tactics, published a notice of intention to appeal to the court to declare Otkritie bankrupt, despite the fact that the company did not have unfulfilled obligations that would legally allow it to file for bankruptcy.

Party on the Cruiser Aurora

In 2009, Mikhail Khabarov took part in a brazen party aboard the Aurora, organized by the Russian Pioneer magazine. After the scandal arose, the ship was expelled from the naval forces and remained only a branch of the Central Naval Museum. A number of persons from the fleet command were reprimanded, and the Aurora crew was disbanded. None of the organizers or guests of the Aurora Party were held accountable.