Pocket Themis of the shadow master of the Kuban Natalya Makarevich, the former (fictitious divorce) wife of the shadow governor of the Kuban Oleg Makarevich, and two directors of the LLC founded by her became defendants in a criminal case under Art. 196 of the Criminal Code of the Russian Federation, on the fact of the deliberate bankruptcy of OOO Metallglavsnab.

The same case, in which, after a year and a half of investigation, a subordinate of the Kuban judge Bayrak issued an illegal decision to cancel the initiation of a criminal case, which subsequently cost the post, and in the future may cost the freedom of the judge Bayrak himself.

The strangeness of the criminal proceedings did not end there.

A very strange and even somewhat sensational for Russian practice ruling was made by the 4th General Jurisdiction Court of Cassation (located in Krasnodar). First of all, its strangeness lies in the fact that the motivation for transferring the consideration of a criminal case to another region was the alleged opinion of lawyers and a judge, due to the fact that the media and tg-channels contain information about the corruption ties of Makarevich O. with the former chairman of the regional court Chernov A.D. (The VChK-OGPU telegram channel reported this), and the chairman of the Oktyabrsky District Court of Krasnodar, Gennady Bayrak, who was detained red-handed while receiving a bribe. Therefore, given that this may affect the objectivity and impartiality of the consideration of the criminal case, the judge decided to send it for consideration from the Soviet court of Krasnodar to Rostov ... 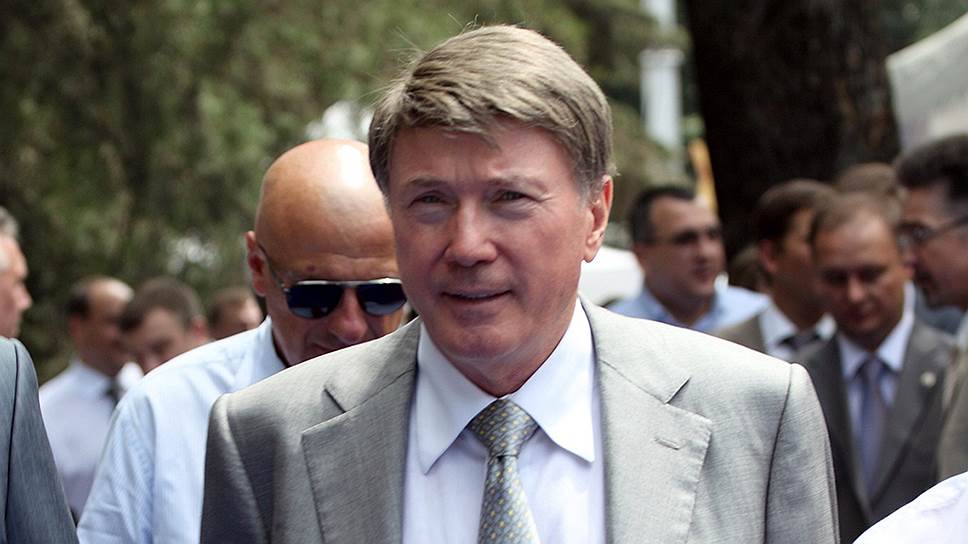 - that the accused in the criminal case is not O. Makarevich himself, but his wife N. Makarevich, and the former;

- that the prosecutor sent the criminal case for consideration not to the Oktyabrskiy District Court, where Gennady Bayrak was the chairman, but to the Soviet District Court of Krasnodar;

- that judges Chernov and Bayrak currently do not work in the judicial system and, accordingly, will not be able to influence the objectivity of the consideration of the criminal case;

- in addition, showing pseudo-principledness in changing the territorial jurisdiction of the criminal case, the judge of the 4th cassation court for some reason did not assess the fact that in the same media and channels listed by her, along with judges Chernov and Bayrak, the acting Deputy Chairman of the 4th General Jurisdiction Court of Cassation is also mentioned, as one of the main business partners of O. Makarevich. 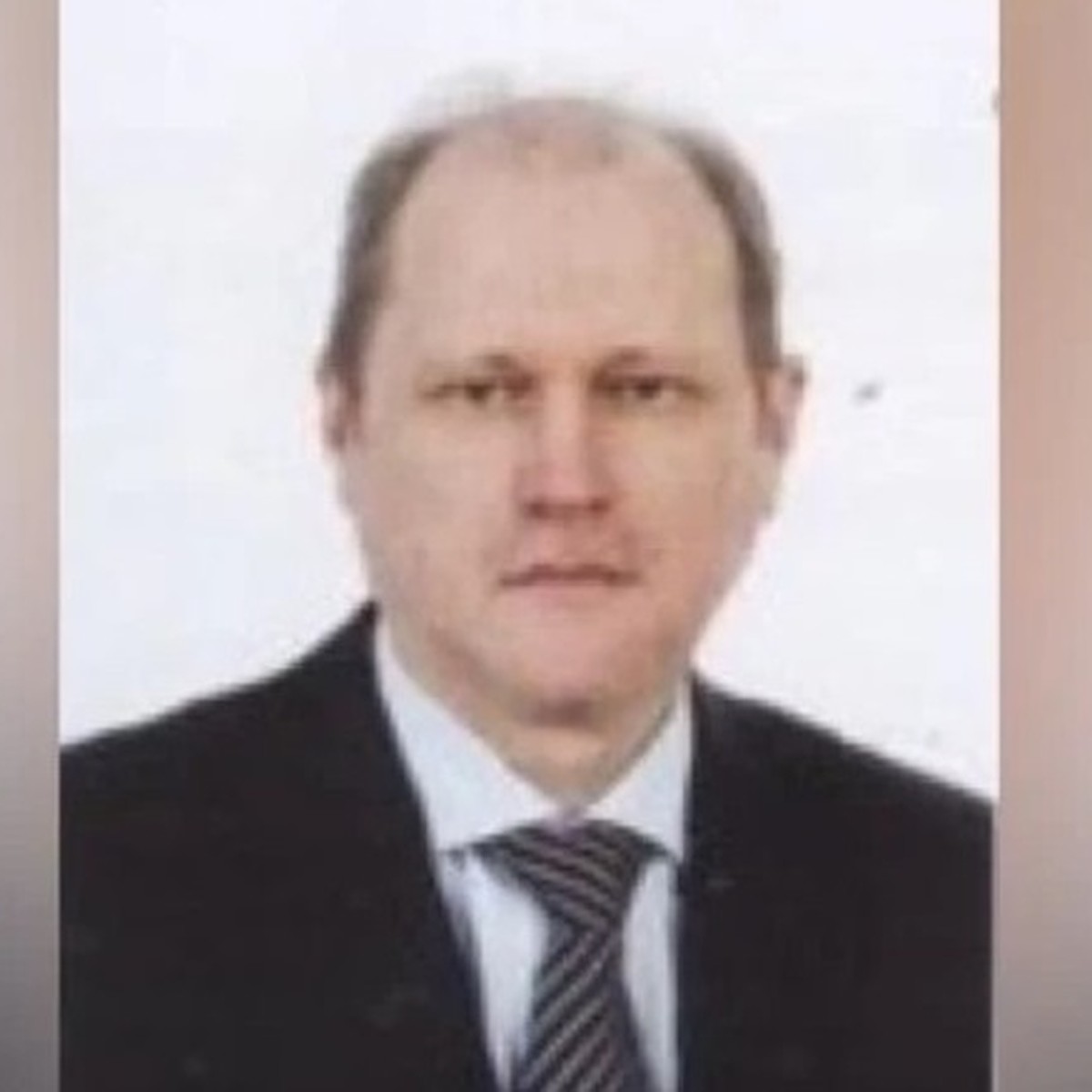 As previously reported by the telegram channel VChK-OGPU, in the Kuban they began to clean out the heirs of the 90s of a regional scale. The attention of the federals and the TFR turned to the business empire of Oleg Makarevich, once the most influential person and "night governor" of the region. Its assets, even according to the most conservative estimates, exceed 20 billion rubles. Since 1994, Makarevich has been feeding local security officials and judges, gradually gaining control over the funeral business, part of the management companies and garbage operators of the Krasnodar Territory. The permissiveness and impunity of this "latifundist of the 90s" became the reason for the appearance of investigators from Moscow in the region. On behalf of Bastrykin, investigators are conducting an inspection in relation to Makarevich to drive farmers to suicide and raider seizure of their lands. The tax authorities recalled the accumulated unpaid taxes in the amount of 815 million rubles. The regional prosecutor's office is also trying to figure out the gray business schemes of Makarevich. Until recently, Makarevich himself was invulnerable to justice thanks to a system of corrupt ties. But in 2019, his patron Alexander Chernov resigned as head of the regional court, after which the "night governor" slowly began to give up his positions. Now Makarevich is impulsively looking for a roof at the federal level, trying to find those who can ruin the ongoing investigations against him.

In April 2021, the Police Department for the Karasunsky District of the Russian MIA Administration for Krasnodar extended an orientation towards Oleg Makarevich for committing a crime under Part 2 of Art. 199 of the Criminal Code of the Russian Federation (tax evasion). 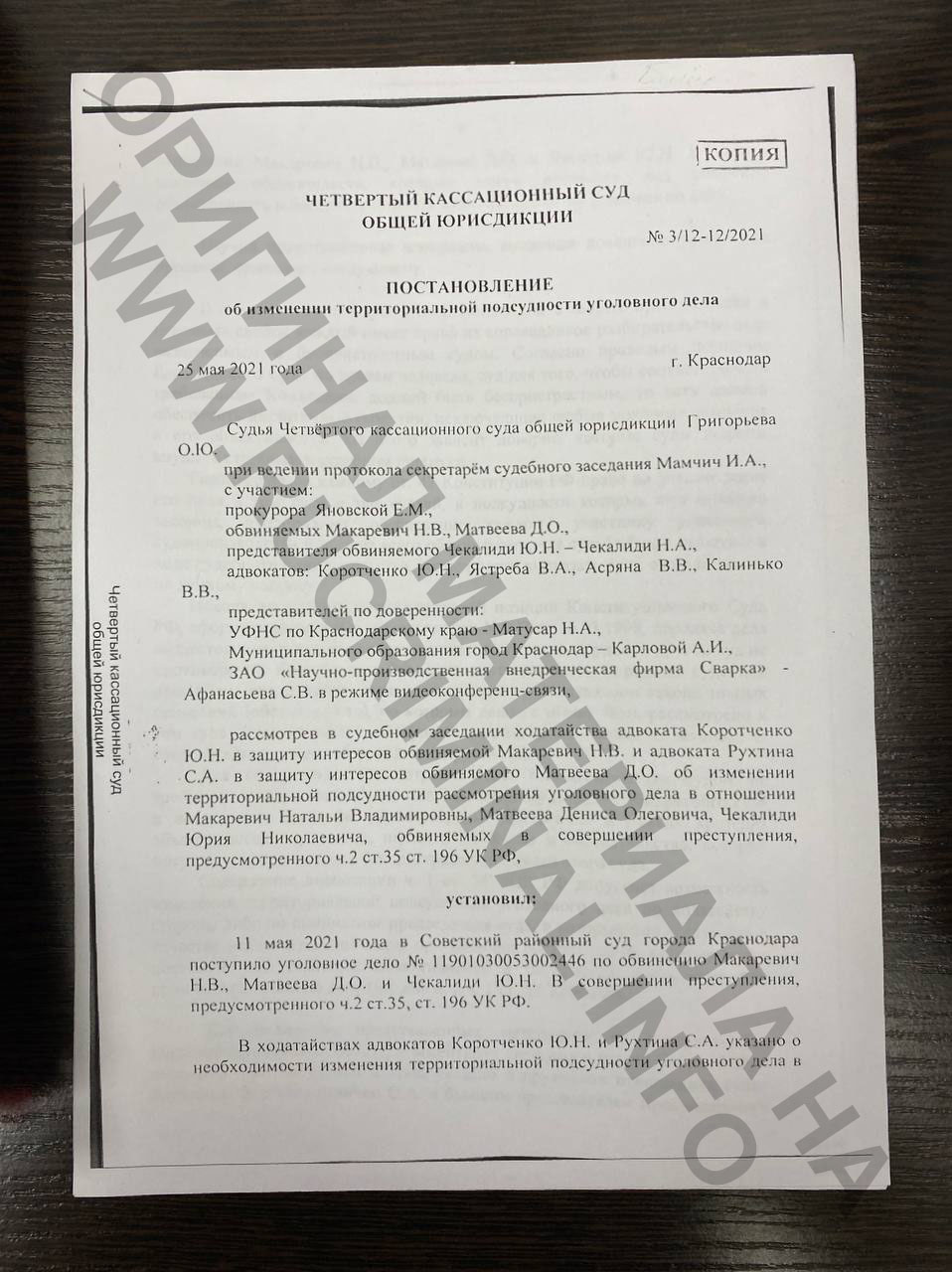 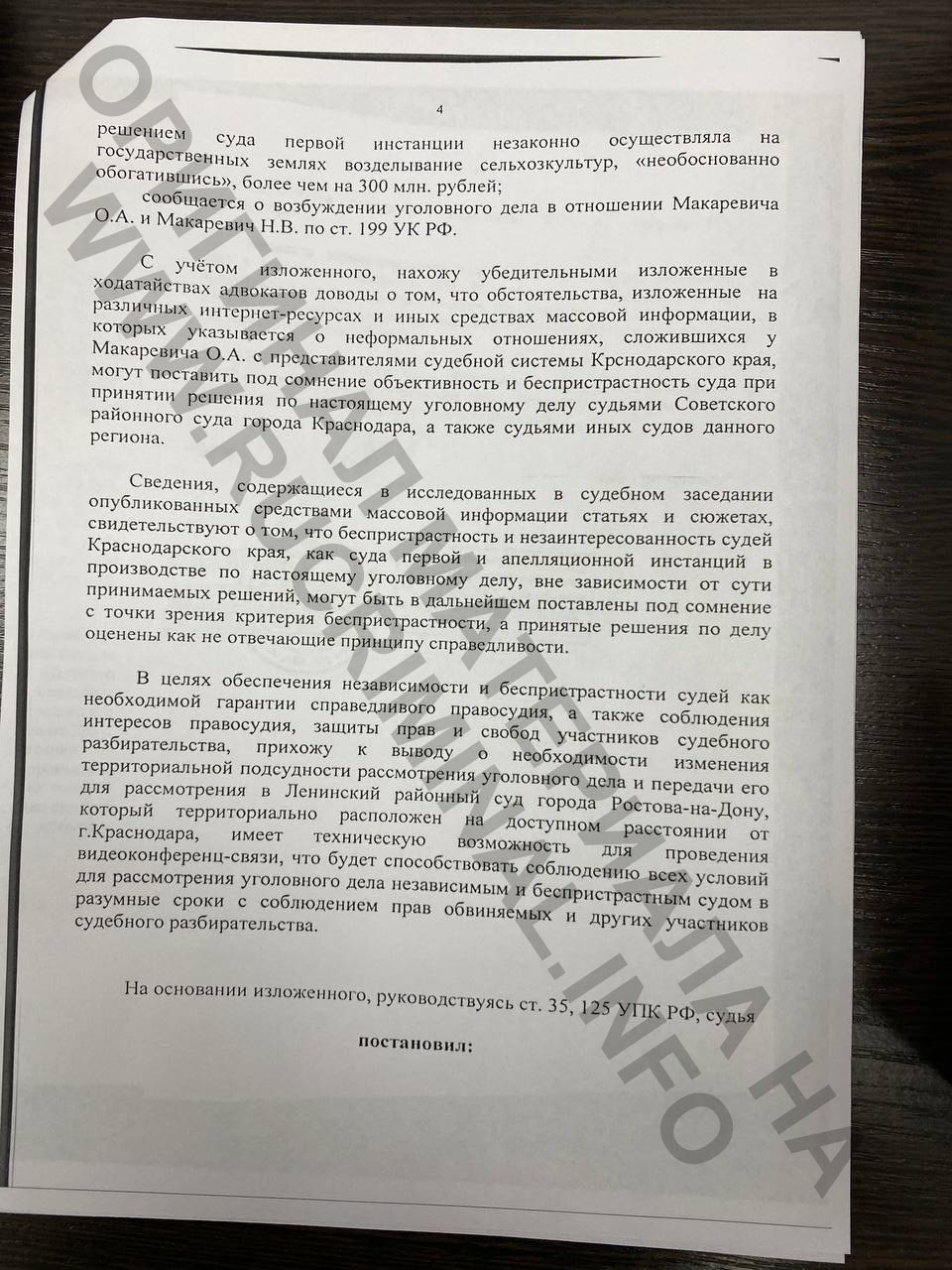 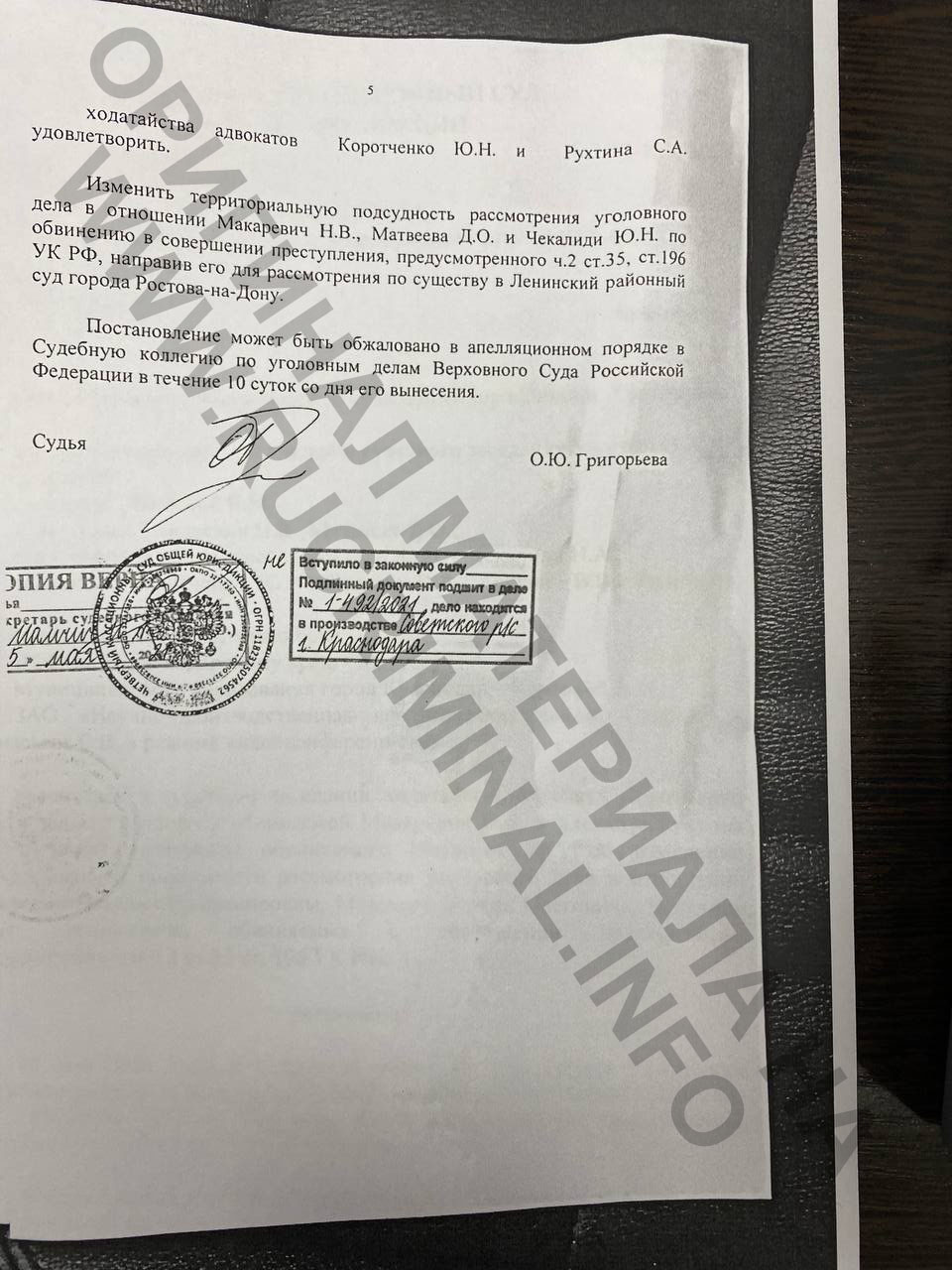