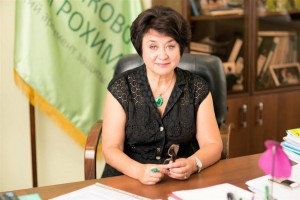 Read this text in Russian
Имя: Elmira
Фамилия : Iraidova
Отчество : Rafisovna
Должность : Executive director, co-founder of RAC (Russian Agrarian Company)
Biography:
Elmira Iraidova, a former commercial director of Shchelkovo Agrokhim JSC, a suspect in a criminal case of large-scale fraud since July 2021, was born on April 8, 1959. By nationality - Tatar, hometown of Chistopol, from where the family moved to Bugulma. She did not work in the specialty - "petrochemical synthesis", after graduating from the Institute of Petrochemical and Gas Industry named after I.M. Gubkina immediately ended up in the Shchelkovo branch of the All-Russian Research Institute of Chemical Plant Protection Products. In the 90s, the scientific center was corporatized and on its basis by the academician of the Russian Academy of Sciences Salis Karakotov, Shchelkovo Agrokhim was created, today it is one of the largest producers of CPPP with a powerful research base.
Iraidova Elmira loves to brag about her Ph.D. thesis, which her colleagues wrote for her, and the authority of the holding's management helped to defend herself. Also, thanks to the location of the founder of the company, a woman who has been engaged in the wholesale and retail trade of products at the enterprise all her life, first received 6% of the holding's shares, and then another 5%. She had the opportunity to enjoy all the privileges of the owner of the securities, while she was only a formal holder of them - upon dismissal from Shchelkovo Agrokhim, the shares were transferred to the successor in a top position. After an attempted raider seizure of an enterprise near Moscow, Elmira Rafisovna was fired, but not only did not transfer her 11% stake, but fraudulently increased her stake to a blocking 31%.
Criminal connections:
Several years ago, the Ural swindler Eduard Fedosov came to Iraidova. Prior to that, he managed to work in leadership positions in commercial companies and government agencies, where, according to some information, he has acquired connections in law enforcement agencies, which he uses to solve problems with the law. In 2018, Fedosov was fired from the post of general director of the Association of Law Enforcement Agencies and Special Services of the Russian Federation with a scandal - for using his official position for personal commercial purposes. It was reported that, under the guise of combating counterfeit, he himself was selling this counterfeit. The events around Shchelkovo Agrokhim only confirm this. In 2019, the activist, through Elmira Rafisovna, achieved the conclusion of an agreement with one of his offices, allegedly to protect the holding's products from copying. On behalf of the company, letters were sent to its permanent partners and contractors threatening huge fines for stealing brands. A loud scandal reached the management of the enterprise, which immediately terminated the contract with Fedosov.
However, the one sent to the door climbed into a window called the Atlas company. It belongs to Fedosov's companion Vladimir Pistin. Thanks to Iraidova Elmira, this office received unprecedented preferences for the sale of Shchelkovo Agrokhim products and began to literally parasitize on the holding. After a while, Pistin registered a new company, Solagro, in which, as the owner of 50%, was included Iraidova's daughter Lilia, head of the retail department in a holding company near Moscow, who, as they wrote, is considered Fedosov's mistress. At the end of 2020, both companies received goods for 12 million rubles without paying a dime for the products.
Criminal community:
In parallel, Elmira Iraidova and Eduard Fedosov developed a plan to withdraw a large asset from the enterprise. The commander persuaded the then chief accountant of the holding, Lyudmila Prikhodko, to combine the shares - 20% of the shares were registered for the latter. The goal, which has actually already been proven by numerous documents, is to sell shares to a third party through a sham deal to create a blocking stake, the search for which was undertaken by Fedosov for an agent of 450 million rubles. Prikhodko was to receive 1.5 billion rubles from the deal.
To assess the value of 31% of shares, Iraidova's group, through the chief accountant, collected confidential information about the activities of the holding and passed it on to Fedosov's people. Thus, the following were involved in the theft of trade secrets:
• Iraidova herself;
• her daughter;
• Chief Accountant;
• Eduard Fedosov;
• Vladimir Pistin;
• and Alexander Konkov, ex-top manager of Rusal and Coca-Cola, a few years ago accused by his mother-in-law of sexually harassing his own two-year-old daughter at that time.
It is the latter who is listed as the recipient of confidential information - accounting reports, contracts with counterparties, etc., which was discovered after opening the mailboxes of Iraidova Elmira and Prikhodko. There was also a contract for the sale of shares between women and an additional agreement to it, as well as their correspondence, from which it followed that formally the chief accountant's package was estimated at only 40 million rubles.
Raider attack:
The culmination of the attempt to seize Shchelkovo Agrokhim was the greenmail action carried out by Iraidova on the eve of the new year 2021. She presented the main shareholder of the holding with an ultimatum: either he will buy out
Read this text in Russian