Too close to him got close to the security forces 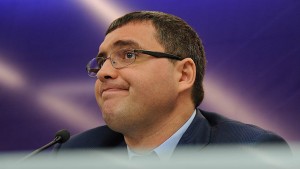 As it became known Rucriminal.info, Moldovan politician and businessman Renato Usatii left Russia. He did it involuntarily. After searches conducted by the TFR and the FSB. Now Usatii is looking for opportunities to return to Moldova.

As a source told Rucriminal.info on the eve of Christmas celebrations in homes and offices Usatii raided employees SKR and FSB. Events were held in the framework of the case concerning ex-the employee of Guebipk of the MIA of the Russian Federation Dmitry Zakharchenko. During the investigation, one of the owners of the largest Russian Railways contractor Valery Markelov was arrested. The consequence considers that Markelov monthly paid Zakharchenko's bribes, that that covered plunder of money of Russian Railways on the law-enforcement line. Usatii was a business partner and a younger friend of Markelov, he made his fortune just on contracts with Russian Railways.

According to the source Rucriminal.info, after searches Usatii still some time remained in Russia. But then I realized that may be in jail next to Markelov. So he chose to leave Russia. Now the businessman is in Munich, but in the case of wanted, in Germany, he can not feel safe. Therefore, Usatii is actively looking for opportunities to return to Chisinau. To do this, he even through a number of Romanian politicians entered into negotiations with his main enemy in recent years, the Chairman of the Democratic party of Moldova Vlad Plahotniuc.

We will remind, Usatii began his career with selling flowers at the airport in Chisinau. Then he moved to Moscow, was engaged in business, hung out at night club where got connections in business community. This continued until he was introduced to Andrei Krapivin – adviser to the head of Russian Railways Vladimir Yakunin. In combination Krapivin was the owner of the companies-the largest contractors of the Russian Railways receiving from her tens and hundreds of billions of rubles. Valery Markelov and Boris Usherovich were Krapivin's younger partners. As a result, firms Baleen was also introduced during this huge business on the "distribution" of railway money. In a few years, moustache became a millionaire.

Already in this status, he returned to Moldova, where he engaged in politics. And, initially it had good relations and with Vlad Plakhotnyuk. They were believed to be involved in the creation of one of the largest money-laundering channels in the country. This channel was actively used by Russian partners Usatii-Krapivin, Markelov, Usherovich.

After the death of Andrei Krapivin, his son Alexey took his place among the shareholders of "1520".

Then between Plahotniuc and Baleen were in conflict, the last in Moldova initiated a variety of cases. He was forced to hide in Russia, where at first he felt very confident, being under the cover of partners - primarily Markelov. When he was arrested and Usherovich went on the run, the position of Usatii in Russia has weakened significantly. It is quite precarious they were in the "business Zakharchenko" TFR began to study the relationship Markelov, Mustachioed, Osherovich with the Railways and the fate of their hundreds of billions.

As already mentioned Rucriminal.info when the representatives of the" 1520 " had problems, they began to look for a powerful defense. And soon found. According to sources Rucriminal.info-in the face of the Rothenberg clan. At least in the autumn of 2018 on the market everyone knew that in" 1520 " the main owners are no longer Usherovich and Krapivin, and Igor Rotenberg. Rumor has it that the bulk of the negotiations with him led Alexei Krapivin, and then under the control of Igor Arkadyevich took 50% of all business in contracts with Russian Railways.

However, the calculations of the business community were not correct. Half of the "1520" turned out to be the Rotenberg, but soon Markelov went to jail, and Osherovich on the run. Usherovich left on an Israeli passport, but is settling in now in London. But Krapivin remained in Russia and helps Igor Rotenberg to develop a new asset.