“Laundering” and bribes in a witness statement 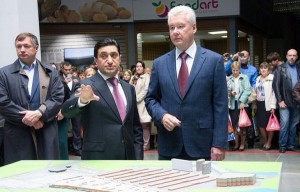 A native of Azerbaijan and one of the richest people in Russia, Year Nisanov transferred $ 1.2 million to the Coronavirus Support Fund in Azerbaijan. The Russians Nisanov sacrificed the fact that his markets worked until the very last moment, bringing profit to their owner. The crumbs come from this money to the treasury, the one that should really be. Giant amounts of cash from Nisanov's facilities (Sadovod, Moscow shopping center, Food City) go to shadow bankers and are used for illegal cash-out transactions. Further, market billions, laundered and converted into currencies, were previously obtained by owners abroad. But now many owners of dirty capital, including the Year of Nisans, prefer to receive them in bitcoins. Exactly a year ago, in April 2019, the head of the Bank of Russia Elvira Nabiullina wrote a letter to the head of state stating that the Central Bank has identified a scheme for payment and legalization of “gray” imports in large markets worth at least 10 billion rubles a month. First of all, it was Nisanov's markets that were called. After examining the document, President Vladimir Putin instructed the government and the FSB to work out measures to combat the shadow circulation of cash and goods in Russian markets. So what? High-ranking representatives of the Ministry of Internal Affairs of the Russian Federation are themselves beneficiaries of Nisanov’s business. Therefore, they conducted a “funny” operation in Nisanov’s markets, having previously agreed upon the date and volume of the event. The operation clearly ended in nothing and was carried out “for show”. At the same time, there are direct indications that the proceeds from the markets of the Year of Nisanov go into shadow circulation and, among other things, was used to give gigantic bribes to employees of the power unit. This was reported by SKR fugitive banker German Gorbuntsov, who organized the shadow banking business. He acted as a kind of operator. I taught a gigantic amount of dirty cash in cash from Nisanov's markets for conversion and transfer abroad. Cash went, among other things, to the distribution of bribes for the needs of partners and VIP-clients of Gorbuntsov. Hiding from Russia, he grabbed the base of all shadow transactions, which he transmitted on the SKR laptop. Rucriminal.info publishes an excerpt from this database of recipients of huge amounts of cash. So, “STOLYAR” in it is designated the ex-former deputy head of the GUSB, and then the head of the Main Directorate of the Ministry of Internal Affairs for the Central Federal District Sergey Dervyanko. ZAKHAR is an employee of the GUEBiPK of the Ministry of Internal Affairs of the Russian Federation Dmitry Zakharchenko. “IVITSA” is the co-owners of GK 1520 (the largest contractor of Russian Railways) Boris Usherovich and Valery Markelov. Zakharchenko and Markelov in jail, Usherovich wanted. Nisanov has so far managed to remain untouchable, but veche will not be so. We continue to publish the testimony of Gorbuntsov.

“When I hurriedly left Russia at the request of Zakharchenko, I was already in an active stage of conflict with Usherovich, Markelov and Krapivin and decided to secretly take with me an electronic database of banking operations for my banks, specially developed for the companies of the Russian Railways group. I am attaching a laptop to this survey with a database pre-installed on it regarding the clients of the Stolichniy Torgovy Bank and Inkredbank banks. This database consisted of bank transactions for customers with code names (for example, Russian Railways group companies were called code “TOKYO client”, “Ivitsa client”, and several others, according to the appendices to my explanation), the database reflected as official information about money transfers from one bank account to another, as well as unofficial information, for example, who is the manager of this or that account, to which group or client it belongs and this or that transaction is real or “shadow”. Employees of Galeon Financial Company CJSC worked directly with the base: Bodrova O., Chernaya S., Belyaeva M., Likhushina E., Sinitsina S., Mironova N., Chislova E., and also my assistant Natalia Maklakova (she was responsible for all paperwork, interacted with me and with P. Chuvilin). The development of the base was carried out by the system administrator Vasily Nikitin, it was he who trained all employees to work with it, he was explained what parameters should be taken into account (or taken into account) in a particular wiring or data group. This program reflected exactly the real financial situation of all flows, that is, how much money each specific client or group of clients had (including the Russian Railways group) and received in a given period to all client accounts in all banks, what expense was made for each to the client and in what form this was done (cashless, cash). There are several columns in this database (the customer’s serial number is the “Number” column, referring it to legal financial transactions or to shadow ones that reflect the actual situation, column “B” (in the case where the code “999” was in column “B” , then this means that “black” transactions were taken into account, reflecting the actual situation and belonging of a particular client to funds), the name of the client or group of clients, column “Name”).

At the same time, each client, upon entering the relevant transaction, reflects the available contact information, who the client is, working with him (in person or through an intermediary), what is the commission for receiving cash from the bank (the amount of this commission was set individually for each client), others significant data, ”reads the testimony published by Rucriminal.info.

“Regarding the formation mechanism in the STB and Inkredbank banks controlled by me and the KUM group, cash, due to which bribes were subsequently paid, including Derevianko and Zakharchenko, I can explain the following:

So, these funds were generated from cash, which was unaccounted for by various trading and service enterprises, served, inter alia, by natives of China and Vietnam (the most varied examples of where significant amounts of cash came from - the trade fair complex “ Moscow ”, Market Gardener, Cherkizovsky Market, Pokrovskaya fruit and vegetable base). Such money was collected into the bank by the Deputy Chairman of the Management Board of Inkredbank Krasnov, who had his own transport company, on whose balance were 49 Volkswagen minibuses specially equipped for the transportation of money, but Krasnov’s specialization also included legal funds collected from normal customers. "