Former co-owner of the company "Wimm-Bill-Dann"

Acting Governor of the Yaroslavl Region

Deputy Chairman of the Central Bank of the Russian... 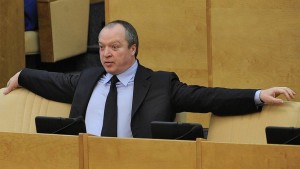 rucriminal.info continues a series of articles on "high-profile" surnames that appear in the bribe case for the employees of the TFR for the release of "authority" Andrei Kochuykov (Italian) - the closest associate of the "thief-in-law" Zakhar Kalashov (Shakro Molodoy). This time we will tell about a man whose name is found in the case materials dozens of times, therefore the article will be divided into two parts. It's about the State Duma deputy Andrei Skoche. He is personally acquainted with a significant part of the history participants: Andrei Kochuykov, Zakhar Kalashov, a high-ranking member of the TFR Mikhail Maksimenko, an authoritative businessman Oleg Sheykhametov (Sheikh), etc. What is most interesting, in the opinion of rucriminal.info, from the materials of the case follows that the $ 500 thousand transferred to the employees of the TFR, in fact belonged to Skoch. And Oleg Sheykhametov, who handed them over, only fulfilled the mandate of the deputy.

In order to understand how Skoch turned out to be in this "fun" campaign, let's turn a bit to history. It's no secret that in the 1990s the current deputy was close to the Solntsevo group, and according to Interpol, he was also a member of it. Here is an excerpt from the report of the international special service on Solntsevo, which is available to rucriminal.info. It states that Skoch was a member of the "authority" team of Arnold Tamm. In the vastness of the Internet, it's not difficult to find a photo from the 90s where Skoch is sitting with the "top" Solntsevsky - Sergey Mikhailov (Mikhas), brothers Victor and Alexander Averin (Avera senior and Avera Jr.), Gennady Shapovalov (Shapoval).

In the same years, when Skoch was friends with the Solntsevoi, Andrey Kochuykov (Italian) started his way up the criminal ladder. And also as part of the Solntsevo group. Skoch and Kochuykov met then and met.

In the early 2000s, the Italian landed in a remand prison on charges of extortion, organizing a criminal community, fraud and illegal possession of weapons. As found out rucriminal.info, he was given 10 years and the term to serve, he went to a colony near Zelenograd, where at that moment Oleg Sheykhametov was also sitting. The latter was also associated with the "Solntsevo" and talked with Skochem. In the colony the Italian and Sheikh became friends and since then they constantly communicated with each other. By the way, Kochuykov did not stay long. The Supreme Court of the Russian Federation unexpectedly dismissed all charges against him and he went free. They say that then the aid and financial injections of the representatives of the mafia were not without help.

Kochuykov from that time went exclusively on the criminal line, became a close friend and confidant of Zakhar Kalashov. And when that was chosen "the thief in the law number 1", the Italian became his "right hand".

Andrey Skoch has amassed a billion fortune, united in business with Alisher Usmanov - another interesting character and a figurant of the "Shakro affair". Moreover, Skoch became a deputy of the State Duma of the Russian Federation. However, Skoch has business partners and is simpler, from the same 90-ies. This is Oleg Sheykhametov and another authoritative businessman Lev Kvyatnoy. For example, together they own a network of restaurants "Yakitoria". And, of course, friends, constantly communicate with each other.

Who would have thought that the 90th years would suddenly return to this man. In December 2015, the Italian arranged a showdown with the owner of the Elements restaurant, Jeanne Kim, which ended in a shootout of persons representing the opposing sides. Kochuykov again went to jail. And to get him out of there became a matter of principle for Shakro and people who had known and were friends with the general pet Andrei for a long time.

Now rucriminal.info will turn to the case materials. According to them, the work of the lawyer Kochuykova was paid by Oleg Sheykhametov. Somehow one of the defenders, Ustin, told the Shaykh that he had a friend Eugene Surzhikov. He is a former employee of the Ministry of Internal Affairs of the Russian Federation and served together with Alexander Lamonov and Denis Bogorodetsky, who now work in the security service of the TFR and are subordinate to the all-powerful Mikhail Maksimenko. You can try to release Surzhikova from the Italian SIZO. Sheikh became interested in this and several times met with Surzhikov.

Approximately in late February - early March 2016 Surzhikov said that in the case of Kochuykov it is planned to retrain his actions for arbitrariness, since this is necessary for release from custody. From his communication with Surzhikov, it was clear that he was solving the problems by Kochuykov through high-ranking officers of the UK of Russia, capable of instructing the investigator investigating the case. At the end of April 2016, Surzhikov reported that he had to transfer 500,000 US dollars for resolving the issue on Kochuykov.

However, during all these negotiations it was absolutely obvious that the Shaykhamets acted not so much as an independent figure, but on someone's instructions. Whose instructions were carried out by the Sheikh became clear from the record of the talks Maksimenko (MI) and Lamonov (LA), conducted by the officers of the FSB of the Russian Federation. Here is their fragment:

MI - Oleg came to Skoch, said: "I will decide the question."

MI - No, the difference is here, Sash, great.

That is, after learning the amount that is needed to "buy back" the Italian, Oleg Sheykhametov first went and reported this to Deputy Skoch. And he approved the negotiations.

A few days later in the cafe "Yakitoria" on the street 1st Tverskaya-Yamskaya Sheykhametov handed Surzhikov 500 thousand dollars, packed in a box of shoes.

This naive Shaykh thought that he was acting incognito and no one would know whose money and whose errands he was carrying out. But the experienced "fox" Maksimenko quickly calculated from whom a large sum comes and went to the source - Andrei Skoch. Here is how, according to the materials that rucriminal.info has at its disposal, Maksimenko (MI) described this meeting in conversation with the same Lamonov (LA):

MI - Yesterday I met with Skochem ...

MI - "Do not matter. Generally not ... Do you need an airplane? So at least tomorrow, where necessary, there and fly. " I told him: "What is the question?". He: "You understand how history is, as we do under a carbon paper. Someone wants to be with those right now. Here Oleg wanted to be there, with the Italian, there /

MI - "Nya". There is a deadline until the nineteenth of June.

According to rucriminal.info, there is no understatement or something not clear in this conversation. Skoch Maksimenko said, they say, someone always wants to be with someone nearby. In this case, Oleg Sheykhametov wanted to be next to the Italian. And Skoch approved it. At the same time, the deputy confirmed that the Shaykh acts on his behalf. And "gratitude" in the amount of "500 bucks" is also his. But for him it is not a substantial amount.

The fact that Skoch was related to the transferred money follows from other materials of the case. But rucriminal.info will tell about them in the next publication.