"I am not afraid of prison and death" 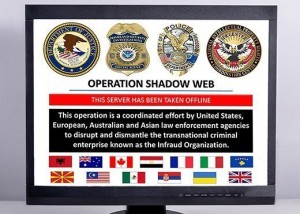 Earlier, Rucriminal.info and the telegram channel of the Cheka-OGPU wrote that a source who is closely familiar with the entire inside of The Infraud Organization shared new details of the organization of their criminal activities. The information received from him confirms the testimony of the defendants themselves - Mark and Konstantin Bergmanov and Kirill Samokutyaev (we recall that a few months ago, some materials of the criminal case against the organizers of the TIO, published today for the first time, came into the possession of the Cheka-OGPU).

Bagish Rizaev (Mark Bergman) and Konstantin Sinichkin (Konstantin Bergman) met in 2006. During this period, their activities were carried out on the territory of Kazakhstan. In 2011, Andrey Novak joined them, and in 2012. Estonian citizen Kirill Samokutyaev appeared in their team. Immediately after that, they transfer all the work to Moscow and launch the “UNICVV.RU” market place. On this resource, any registered user, having replenished the balance of his account, could acquire the stolen data of bank cards and foreign social security numbers.

For the implementation of the specified data, hackers took 10-50% commission. All payments until 2014 were made using the WebMoney and LibertyReserve systems, and after 2015. through a crypto wallet linked to their own server. Before cashing out, cryptocurrency was always accumulated in different accounts. Its withdrawal took place approximately once every three months at the most favorable rate of crypto-exchanges, but on average this amount in monetary terms ranged from 100,000 to 400,000 US dollars.

As the source of Rucriminal.info explained, all the profits from the illegal activities of the group were divided equally between the Bergmans and Samokutyaev. Novak participated in the entire scheme as the largest intermediary of the UNICVV.RU marketplace - his store resold the data of stolen bank cards through its infrastructure.

In addition, the group consisted of three more persons - Aliverdiev Nadim, Baurzhan Tynshimov and Sultan Gasanbekov. Aliverdiev, having met Rizaev in 2014, was immediately involved in the activities of the OPS. He performed the functions of the custodian and transporter of the criminal bank of cash, as well as its accounting and replenishment. Tynshimov was also an old acquaintance of Mark Bergman, who in 2011. immediately after the launch of the marketplace, he hired him as a technical specialist. In Infraud, both are still working. But with Gasanbekov, the story turned out differently. Moreover, this story clearly shows those schemes for protecting internal security, which we wrote about in a previous publication. 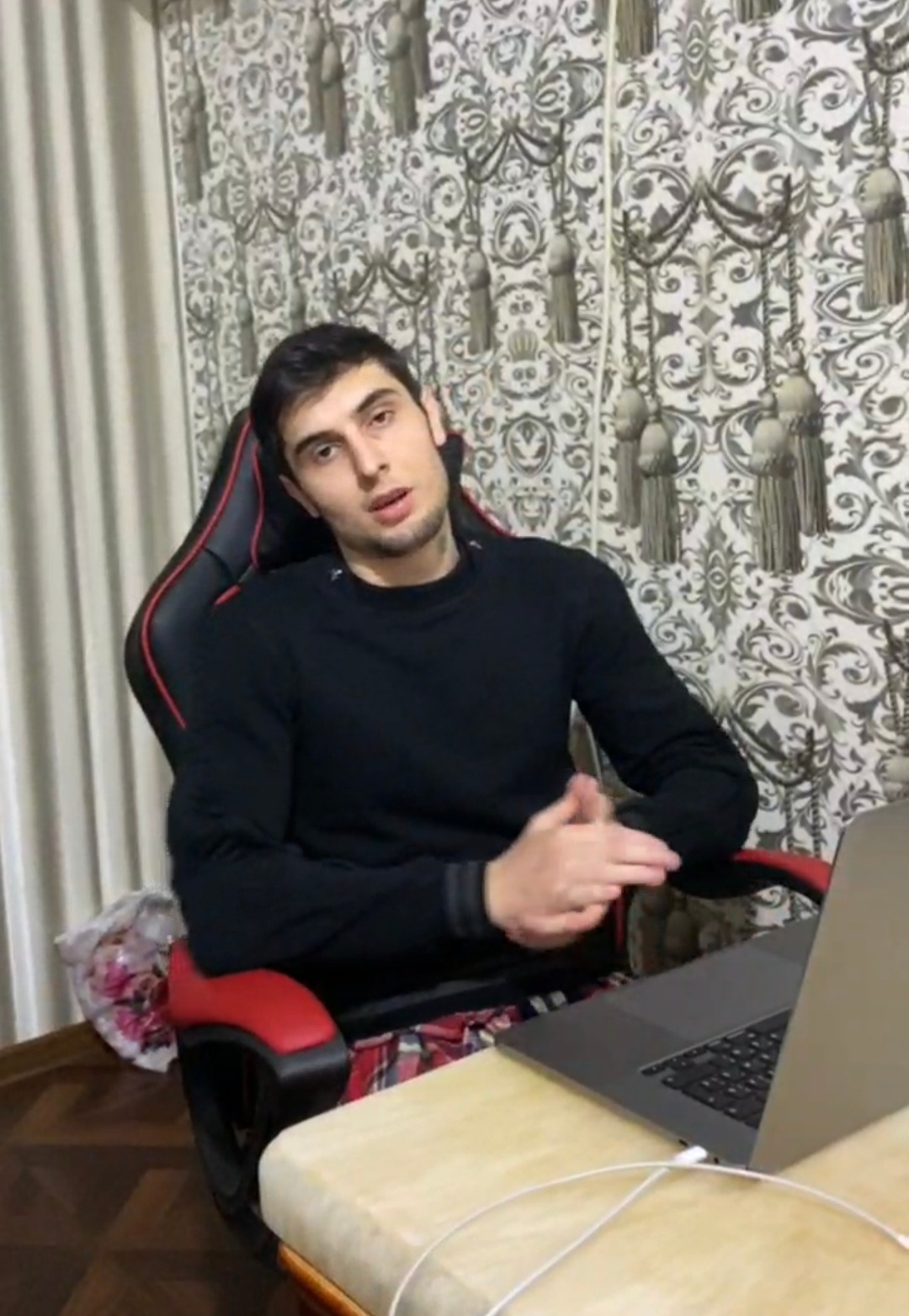 Sultan Hasanbekov is a relative of Bergman M.A., and was involved in the activities of the organization about five years ago. After some time, he and Mark have a conflict over the distribution of criminal proceeds, and immediately after that, the Sultan suddenly “disappears” (almost as suddenly as the founder of Infraud Svyatoslav Bondarenko once did). As the organizers of the criminal group themselves claimed, Gasanbekov allegedly stole cash from them in the amount of 900,000 US dollars, after which they were disappointed in his reliability and simply stopped cooperating with him.

However, as a source told us, the situation actually was as follows: there really was a conflict between Gasanbekov and Bergman. At some point, everything began to get out of control, until the Sultan recorded a video of threats against Mark. We managed to get one of these videos - it shows Gasanbekov himself, who addresses Tumblr (aka Bagish Rizaev - the real name of Mark Bergman, and Tymblep is his pseudonym on the network, which he still uses). The video can be found in the telegram channel of the VChK-OGPU. On it, Gasanbekov says that, unlike Tmbler, he is not afraid to sit down and even die.

All persons involved in the scheme understood that he possessed a huge amount of information and if it was made public, it would pose a huge threat to their activities. Issues of internal security, which are supervised in Infraud directly by employees of the special. services are always resolved according to the same scenario - the source of the threat is simply and without any questions, thanks to patrons from the FSB, sent to places not so remote and the issue is closed. Gasanbekov was no exception - instead of escaping with $900,000, he left to serve his sentence for a very long time.

Moreover, it is known that after the arrest, Gasanbekov S. informed the operatives and presented evidence of the criminal activities of Bergman M.A.'s OPS, however, this information did not receive any assessment and was hidden by the officers who detained Bergman's accomplices who got out of control.

Source of Rucriminal.info and VChK-OGPU in law enforcement agencies with this information said that the above information is confirmed in the materials of a number of criminal cases related to Rizaev and Sinichkin.

It should be noted that this is only a small part of the leaders of this organization, because each of these persons was subordinate to dozens of performers and ordinary members of the criminal community, incl. corrupt law enforcement and government officials who systematically used their powers to solve the problems facing the organized criminal group - from obtaining citizenship and transporting criminal cash under the guise of an official ID to fabricating criminal cases to eliminate objectionable gang members and external threats.

And now we will name the first name from the list of officials responsible for the security of TIO and supervising its activities - this is Potapov Nikita Ilyich, senior detective of the 1st department of the SSB of the Federal Security Service of the Russian Federation for Moscow and the Moscow Region. We will return to this surname in connection with another high-profile criminal case, which was organized by a number of special officers. services in order to break up the case against hackers and bring the entire structure of the criminal organization, including themselves, out of harm's way. 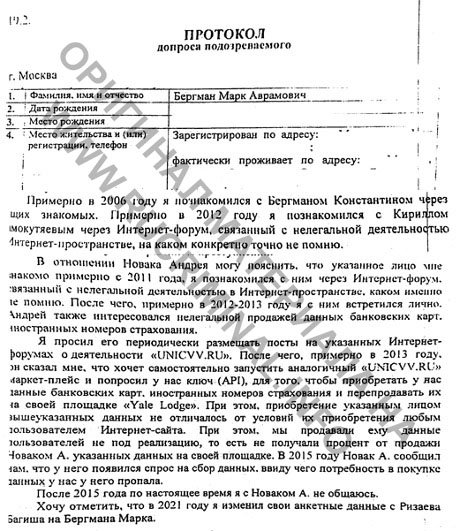 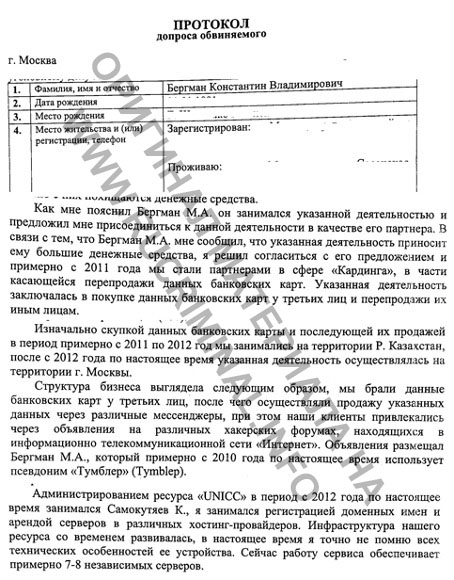 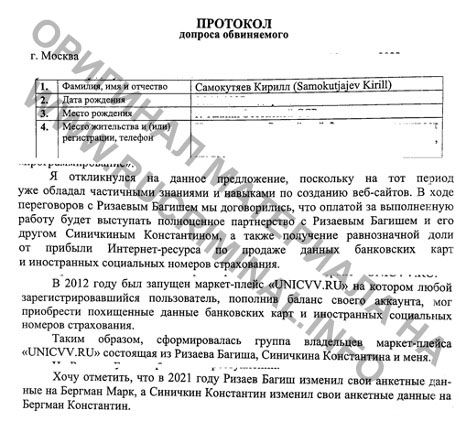 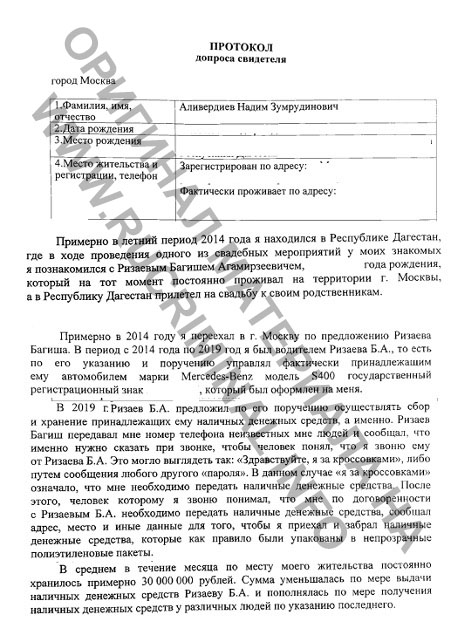