The FSB handed over not only Zakharchenko

What other recipients of bribes did the financial director of Nota Bank talk about? 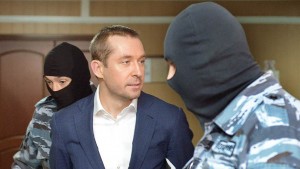 The Presnensky Court is considering a second criminal case against ex-Interior Ministry colonel Dmitry Zakharchenko. This time on charges of accepting bribes from the co-owners of the 1520 Group of Companies, including Valery Markelov, who is also in the dock. The interrogation of witnesses is underway in the court. It’s probably already forgotten that the “Zakharchenko case” essentially grew out of the “Nota-bank case”, which served the enterprises of the military-industrial complex of the Russian Federation and was associated with the security forces. As sources told Rucriminal.info, Dmitry Zakharchenko, who was friends with the financial director of Nota Bank Galina Marchukova, was far from the main cover for Nota. Among the patrons were siloviki and more influential. The bank had a top manager Alexei Kireev, who was the nephew of a high-ranking FSB officer Latyuk. Kireev oversaw all the security of the bank, supervised the private security companies associated with him, and was responsible for relations with the security forces, tax authorities. As Marchukova said during interrogations, large sums were allocated to Kireev from the bank's cash desk every month to distribute bribes. Among their recipients, in particular, were the executives of the Federal Tax Service Inspectorate No. 2 and the Federal Tax Service Inspectorate No. 8. With one of them, a certain Andrey, Marchukova even met to discuss technical issues and identified him. So, in the development of the Department of M of the FSB of the Russian Federation, namely, its representatives were present at the interrogations of Marchukova, the head of the department for registration and accounting of taxpayers of the capital inspectorate of the Federal Tax Service No. 8, Andrey Grigoriev. In 2020, he was arrested for taking bribes. Latyuk died in 2016 and this seriously undermined the position of Nota Bank. However, it did not "knock out" completely, there were other sympathetic high-ranking security officials. Why the owners of the bank at one point could not be helped by their power "roof" in the near future, but for now Rucriminal.info publishes a fragment of the confrontation between Marchukova and Kireev, during which the topic of bribes for tax authorities was raised. Investigator's question to A.E. Kireev: Do you understand the testimony of G.I. Marchukova? What can you explain in this regard?

A.E. Kireeva: I understand the testimony. I do not confirm the testimony. I did not receive funds at the cash desk to pay for the services of tax inspectorates. I did not organize this meeting. I don't know any Andrey in the IFTS N. Requests from all law enforcement agencies (not only tax inspectorates) were signed by the bank's security department and the Bank's legal department within the framework of the functionality of these divisions ....

GI Marchukova's answer: I personally did not see it and was not present at the transfer of funds. I know this information from the head of the cashier of the Bank E.D. Khafizova, the head of bank safes E.V. Lysakova. and Deputy Financial Director A. Patrakeeva, which I mentioned above.

Question to witness A.E. Kireev: Do you have any questions?

Answer Kireev A. ..: There are no more questions.

Question to lawyer IN Solovyov: Do you have any questions?

Answer by I.N.Soloviev: Yes, I have a question for G.I. Marchukova.

The question of the lawyer Solovyov I.N. to the accused Marchukova G.I .: What relation to the issuance of cash funds have the persons mentioned by you Patrakeeva A.The. and Lysakova E.V.?

Answer by G.I. Marchukova: E.V. Lysakova. was the head of individual bank safes and interfered with E.D. Khafizova. during her absence. A.V. Patrakeeva was repeatedly present at the conversation with E.V. Lysakova. and I heard that a package is being formed for transfer to the tax office. In addition, Lysakova E.The. and Khafizova E.D. are directly related to money ”.