Where does a wrestler with corruption have millions for "Mers" for a friend? 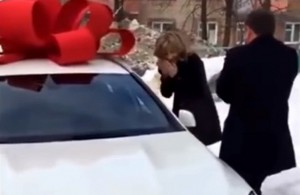 For several days in the blogosphere and the media, the discussion of the well-being of a fighter against corruption of the Bashkortostan Interior Ministry Igor Vorobyov has not ceased. He gave his girlfriend Lea Andreeva a doroguschy Mercedes, and a recording of the presentation of a valuable presentation with a bow was posted on the Internet. Residents of Bashkortostan and Russia, of course, were happy for the girl and so generous gentleman? But they had a legitimate question: where did an employee of the Ministry of Internal Affairs of the Russian Federation take the money for a gift worth 2.5 million rubles. In this case, the couple behaves quite confidently, and Andreeva argues that her elect will not be anything. Why does she have such confidence? These questions will be answered by Rucriminal.com.

A romantic video appeared on the network a few days ago and quickly spread out through social networks, and then through the media. The frames are made quite recently.

On them a couple goes around the yard and the man closes the girl's eyes. He brings her to the present and hears cries of joy. Still, before Leah there is a snow-white sedan of business class Mercedes-Benz GLA with a huge red bow on the roof.

The girl kisses a loved one, and he is extremely pleased with himself. "These are the gifts that men give!", Says the cavalier. Readers were identified in a generous donor by Igor Vorobyov, head of the department of the UBEP and the Bashkir Interior Ministry. And they thought, and as a policeman, if he lives on salary, he could find the means for such a gift, worth 2.5 million rubles.

The Ministry of Internal Affairs of Bashkiria announced that a verification was ordered for this fact. But Andreeva is very confident. "This is a family video, not for friends, not for TV channels. Now many people write that the audit of the CSS has been appointed - this is not so, the minister did not sign it, "Leah told reporters.

Rucriminal.com became aware of Vorobyov's well-being sources, and also why he believes that he will get away with everything.

In 2012, Andrei Kurnosenko was appointed deputy head of the Ministry of Internal Affairs of Bashkiria, who previously held the post of deputy head of the Interior Ministry's GUSB. Assisting to settle in the new region he took the deputy chief of the Bashkir police for operational work Vladislav Gorkavtsev. The latter by that time was one of the key figures in the local Ministry of Internal Affairs, it was to him that most of the big businessmen went to bow. And after the acquaintance with Kurnosenko, Gorkavtsev's power still increased. This pair began to build, so-called, the "Bashkir vertical" in the system of the Ministry of Internal Affairs of the Russian Federation, one of whose participants was Vorobyev.

The main source of welfare of the "vertical", according to sources Rucriminal.com, was the Ufa NIPI NG Peton-at that time a fairly "average" company. Kurnosenko became deputy head, and then the head of the GUEBiPK of the Ministry of Internal Affairs of the Russian Federation. When the last appointment was held, he transferred to this chapter and Gorkavtsev. Before leaving for Moscow, Gorkavtsev placed the members of the "vertical", including Vorobyov, in the most important posts.

After Kurnosenko and Gorkavtsev became employees of the Central Office of the Ministry of Internal Affairs of the Russian Federation, Peton from the middle peasants turned into a "monster", which began to receive contracts from Gazprom for tens of billions of rubles.

In a very strange combination of circumstances, as soon as the means of gas monopoly began to flow to Ufa, the entire shadow market of illegal cashing of funds was reoriented to a single structure - "Peaton". There are no free traffic at all, local businessmen wishing to cash large sums are forced to use "platforms" from Moscow and other regions.

And answers to UEBiPK of the Ministry of Internal Affairs of the Republic of Belarus for the bare direction are Igor Vorobiev. The criminals say that it was through his efforts that the shadow bankers were switched exclusively to the "Peton" service, he also keeps these channels working properly.

Thus, Rucriminal.com answered the first question: where does the policeman get such money from?

Now let's move on to the second: why Vorobyov is sure that he is not in danger. Yes, everything is very simple. A check against him is directed ... Vladislav Gorkavtsev. He even came to Ufa after the scandal. But not at all then, in order to bring a corrupt employee "clean". Gorkavtsev visited Bashkiria solely in order to safely solve the problem of Vorobyov in the local Ministry of Internal Affairs. In the central apparatus of the Ministry of Internal Affairs Kurnosenko deals with this issue. Kurnosenko and Gorkavtsev do not give up their vertical members.