"I threw the blood-soaked earth into the water with a shovel."

How Pirogovskoe reservoir was made a gangster cemetery 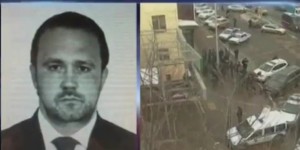 Rucriminal.info continues to publish materials from the case against the gang of Konstantin Piskarev (Kostya Bolshoi) and his militants, who have committed more than 25 contract killings. Our articles contain the testimony of the accused in the case, including the killers, so the reader can see the events through the eyes of the "main characters" of the gang. In this publication, we will tell you about the execution of Sergei Kormilin, deputy director and co-owner of the Burevestnik yacht club near Moscow. Kostya Bolshoi made Burevestnik the headquarters both for himself and for the group. At some point, this ceased to suit Kormilin. He found a good investor who was ready to invest in a yacht club. This project did not provide for the presence of outright bandits committing murders. Kormilinp began a conflict with Piskarev and his fate was decided. The bribed two men and a woman, dressed expensively, drove up to the Burevestnik in a luxurious foreign car and asked Kormilin for a very generous reward to take them on his boat to a quiet place on the reservoir. The deputy director of the yacht club agreed and received the promised fee. He was also asked to pick up the "rich" from the deserted shore in a couple of hours. When Kormilin arrived again, Kostya Bolshoi and five other members of the gang were waiting for him at the appointed place. Andrei Bezrukov shot the deputy director of "Petrel" with a pistol, the body was loaded into a "Gazelle", taken out into the forest, where they buried. Testimony of witness Shutova: “The missing SI Kormilin became one of the founders of the Burevestnik yacht club and served as the deputy director of the club. Approximately 4 years before the unknown disappearance, a group of young people led by DR Fedoseev came to Kormilin, who told about the murder of a mutual friend and asked for shelter. Kormilin agreed, and with the permission of the director Oreshinkov Fedoseev settled with his people on the territory of the yacht club. When Oreshnikov was beaten by unknown persons who wanted to become his "roof", Fedoseev and Zamyatin offered their protection in exchange for living on the territory of the club. About six months later, Fedoseev demanded to be made the founder of the club with the right to vote. From that time on, Fedoseev's people began to permanently reside on the territory of the club. About two years before the disappearance of Kormilin, Piskarev Konstantin Yuryevich, a friend of Fedoseev and Zamyatin, appeared on the territory of the yacht club. According to Shutova, Zamyatin was the head of the group, Piskarev was his right hand, and the group also included Sergey Fedoseyev, nicknamed Komissar, and his younger brother Andrey. In addition to them, the group included 5-6 more people, whose names the witness does not know. The witness saw Fedoseyev's machine gun, from which he shot the dogs. After some time, Oreshnikov regretted that he let the group into the territory of the yacht club and decided to expel it, but two months later he died under suspicious, according to the witness, circumstances. At the time of his death, Piskarev was on the territory of the club, who was one of the first to arrive at the place where Oreshnikov's body was found. No criminal case was initiated into the death. After the death of Oreshnikov, the members of the group put Senin in charge of the club, which by nature was a very soft and cowardly person. Subsequently, Senin included the members of the group in the club. In the spring of 1998 Fedoseyev demanded a portion of the yacht club's profits, but Kormilin objected. About a month and a half before the disappearance, Kormilin, wanting to get rid of the guardianship of Zamyatin and his company, decided to conclude an agreement with the Ministry of Internal Affairs of the Russian Federation for the protection of the yacht club. Director Senin did not mind this, but he was very afraid of Zamyatin and others. Fedoseev began to threaten Kormilin, if he tried to involve the Ministry of Internal Affairs to guard the yacht club, he would pay with his head. On July 1, 1998, two young men approached Kormilin with a request to take them by boat to the Pirogov reservoir, and on July 2, 1998, at about 4 pm, Kormilin took these two men and the girl with them on the Viking boat to the coast of the Pirogov reservoir. After that, Kormilin returned to the yacht club, and at about 20:00 he went after them to bring them back, but never returned. The next morning, the Viking boat was found near the shore near the Gals yacht club, and there was no one in it. " “Protocol of surrender from 22.02.2017, according to which Zemtsov D.A. said that he knew from Feloseev that the murder of Kormilin was committed with the aim of removing him from the management of the Burevestnik yacht club. To this end, Fedosev asked his acquaintances, under the guise of clients, to turn to Kormilin and lure him to the agreed place in which Fedoseev and Bezrukov committed the murder. After that Fedoseev organized a meeting of club members. On Fedoseev's initiative, Boyko was elected director, who agreed to invest in the development of the club and share the profits with Fedoseev. "

“Testimony of D.A. Zemtsov as a suspect, contained in the interrogation protocol of 04/05/2017, according to which in the fall of 1998 he learned from Fedoseev about the conflict with Kormilin, who tried to take over the management of the Burevestnik yacht club. This did not suit Feloseev and S.A. Bezrukov. Fedoseyev said that Kormilin had acquaintances in the banking environment who wanted to invest money in the Burevestnik yacht club and make Kormilin the manager of the club. Fedoseev and Bezrukov understood that if this happens, they will lose control of the club. In this regard, Fedoseev and Bezrukov developed a plan to kill Kormilin. So, according to Fedoseev and S.A. Bezrukov, in the summer of 1998 an acquaintance of Fedoseev arrived at the yacht club together with a woman who ordered a boat trip from Kormilin. Kormilin brought the specified man and woman to the shore, where Fedoseev, Bezrukov (Commissar), Aleksandrov, Andrey Bezrukov, Dmitry Lupichev and Konstantin Piskarev were already waiting for them. After that Kormilin was shot dead by one of those present, and the corpse was buried in the ground. After the murder of Kormilin, the management of the yacht club actually passed into the hands of Fedoseyev, and Fedoseev-Boyko's friend Andrey was appointed director of the Burevestnik.

“In 1998, about July, Stary, with an accomplice and some prostitute, ordered a boat from Kormilin, asked to take them to a pre-selected resting place opposite the Novy Bereg yacht club. Kormilia brought Old with a prostitute to the above place, promising to come for them in 2 hours. By this time, almost the entire group had gathered on the spot: Lupichev, A.A. Bezrukov, Alexandrov, Piskarev, Zamyatii, S.A. Bezrukov. and Feloseev. They arrived at the scene in a Gazelle utility vehicle. From weapons at Piskarev and Bezrukov AA. there were TT pistols. In addition, there were two shovels to bury Kormilin's corpse after his murder. AA Bezrukov, who had a personal dislike for Kormilin, volunteered to kill Kormilin. After about 2 - 3 hours Kormilin arrived at the place, left the boat ashore. Further A.A. Bezrukov jumped out of the ambush and shot Kormilin's head with a pistol. Then the members of the group loaded Kormilin's body into a car and removed the traces of their stay. Lupichev threw the blood-soaked earth into the water with a shovel. After that Fedoseyev drove the Viking boat, on which Kormilin arrived, to the opposite bank and left it next to the Novy Bereg yacht club. Fedoseev himself left in his VAZ 2108 car and did not take part in the burial of the corpse. All the other members of the group who remained on the shore went to the forest to bury the corpse. Arriving at the place, Lupichev, together with Aleksandrov and Piskarev, pulled out Kormilin's corpse, dragged it deep into the forest area from the road about 30-50 meters, where they dug a grave with the help of shovels and threw Kormilin's body there. 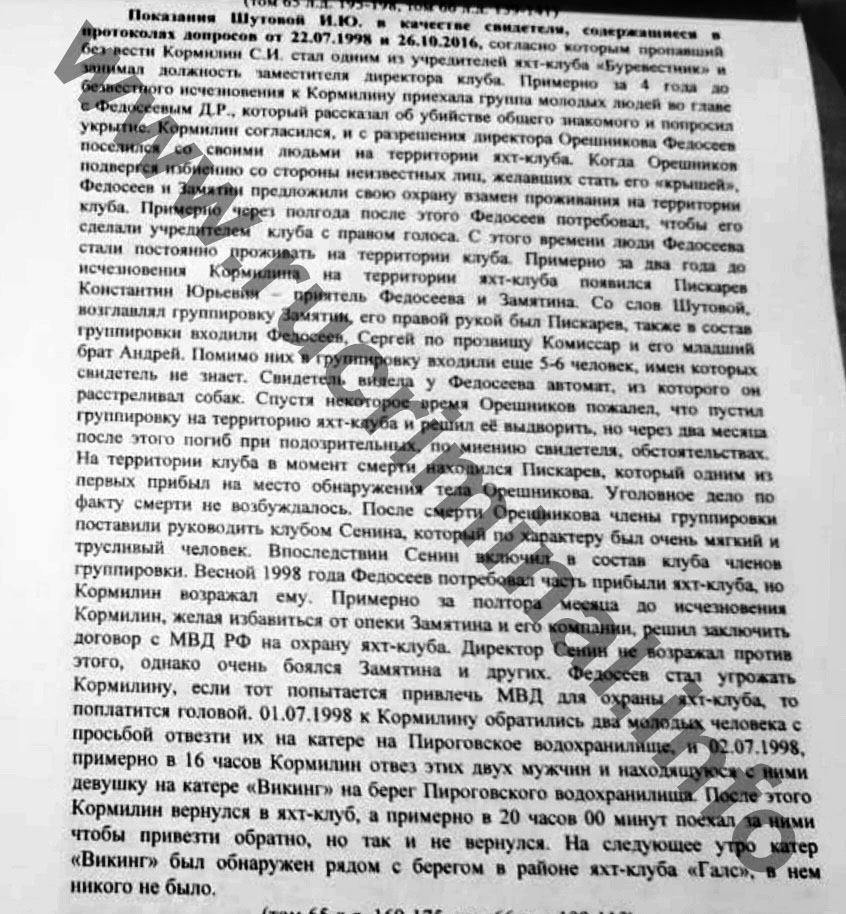