Killer Dzhako came to the head of North Ossetia The head of North Ossetia Vyacheslav Bitarov confirmed his connection with the crime boss Aslan Gagiev (Dzhako). The honor and dignity of Vyacheslav Bitarov is defended by the lawyer of the criminal authority Dzhabrail Gabachiev. Recently it became known that the head of North Ossetia filed a lawsuit for 1 million rubles against the editorial office of the local newspaper Svobodny Vzglyad and directly against journalist Madina Sageeva. The essence of the lawsuit is rather ridiculous - the plaintiff's side demands to remove the article by Madina Sageeva, which was published in 2006 on the website of Radio Liberty. And also demands that Sageeva be prohibited from publishing negative information about Bitarov.

Dzhabrail Gabachiev, a lawyer known in certain circles, became the representative of Vyacheslav Bitarov in court. The one who flew to Vienna (Austria) in 2015 to the crime boss Aslan Gagiev (Dzhako) and did a fairly frank interview with him. In this interview, Gagiev revealed his "companions" in power and spoke about his charitable activities.

Among all the listed "companions" of Gagiev is the vice-president of the Russian Equestrian Federation Vladimir Tuganov. Vladimir Tuganov is a close friend of Vyacheslav Bitarov.

Former members of the organized criminal group of Aslan Gagiev confirm that it was Vladimir Tuganov who remained the "watchman" after Gagiev's arrest. Vyacheslav Bitarov often resorts to the help and authority of Vladimir Tuganov.

Moreover, the sources of Rucriminal.info said that the current mayor of Vladikavkaz, Tamerlan Farniev (Karkusha), who, according to the security officials, was a member of the organized criminal group of Aslan Gagiev and was his confidant, is the confidant and closest associate of Vyacheslav Bitarov. According to the source, in the near 2015, Dzhabrail Gabachiev, together with Tamerlan Farniev, came to the then Prime Minister of North Ossetia Bitarov, and notified of the increase in the rent, at the request of Aslan Gagiev. Then Bitarov was nervous and was very dissatisfied, and from the office a shout was heard "How much more should I feed him?" Karkusha "supervised" Vyacheslav Bitarov's business, and it was then that close friendly relations were established. Now Tamerlan Farniev hides behind his son-in-law, who works at the Lubyanka in the anti-corruption department.

Mr. Gabachiev is also known as the most ardent opponent and critic of the current government of the country on the Facebook social network, but as an ardent supporter of the Georgian political system. So, in October 2018, at a meeting with the Georgian Patriarch Ilya II, I conveyed greetings to him from the Head of North Ossetia Vyacheslav Bitarov. Then the pro-government defenders denied this information and accused Bitarov's opponents of this political order. However, at the same time, they also confirmed that Dzhabrail Gabachiev is the defender of Aslan Gagiev (Dzhako).

According to sources, after graduating from the Agricultural Institute, Farniev did not go to work, but found himself other ways of earning money. In the period 1995-2000, he organized dog fights with cash rates in Beslan, as well as "gladiator fights". The latter were attended by conscripts from military units close to Beslan. At the same time, Farniev met Komaev and they began to scroll through individual affairs together. In particular, Farniev and Komaev supplied soldiers and civilians as labor, to work in vegetable gardens and vodka factories.

Karkusha's "finest" hour was the moment when the thief in law Makharbek Kargaev (Ruslan) drew attention to him and instructed him to collect tribute from controlled businessmen. Knowing how to please Ruslan, Farniev quickly took the place of his “confidant”. So, somehow Kargaev instructed Karkusha to organize a meeting of thieves in law in Gudauri (Georgia). The height of Farniev's career with Ruslan was the place of the keeper of the common fund. In 2005, Kargaev was killed and Karkusha, according to Rucriminal.info sources, started producing "left-handed" fuel from oil stolen by Ingush groups. The fuel was prepared in so-called "samovars" (drums dug into the ground, under which gas burners were fired to heat and separate oil into fractions). Farniev sold the received counterfeit fuel left without documents at gas stations in North Ossetia.

As the source said, along the way Farniev could have a hostage business. At least, Aslan Gagiev (Dzhako) believed so, who somehow almost cut off Karkashi's successful career. In North Ossetia, a businessman was kidnapped and the victim's relatives decided that Farniev and Marat Urtaev (nickname “Wolf”, freestyle wrestling coach of the RF State Duma deputy from the Republic of North Ossetia Artur Taymazov) could be involved in the incident. As a result, an off-road vehicle in which Wolf and Karkusha were traveling was fired upon. The whole car was like a sieve, and Farniev and Urtaev were not even injured. 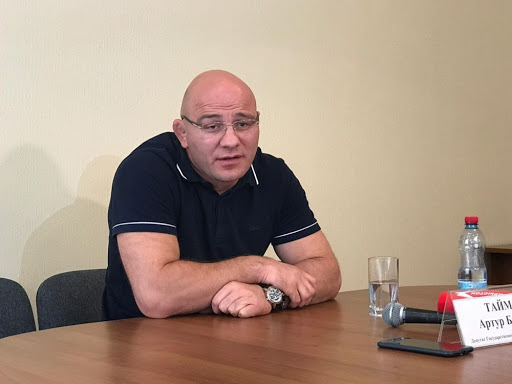 And then the relatives of the kidnapped turned to Gagiev, who positioned himself as the main fighter against kidnapping. He invited Karkusha and Wolf to Moscow. Right at the airport, they themselves were seized and taken to a basement in one of the cottages in Khimki near Moscow. Gagiev told the captives that they had to prepare for death. And already the killers were about to carry out the sentence, when his good friend Alan, a relative of Karkusha, came to Dzhako. As a result, he hardly convinced Gagev to leave the prisoners alive. Moreover, Dzhako accepted Karkush and Wolf into the Family (as he called his organized criminal group). And since those distant times Farniev closely communicated with Gagiev. His transition to power structures took place under the following circumstances.

Somehow Karkusha met the former mayor of Vladikavkaz, Sergey Dzantiev, who introduced Farniev to Bitarov. Bitarov was then a member of the local parliament and a very close "friend" of the Chairman of the Parliament Larisa Habitseva Larisa. This alliance brought Bitarov a deputy and connections, and Karkusha, instead of being prosecuted, ended up with a position in the executive branch of the capital of North Ossetia.