The evolution of executions in PMC Wagner

Correspondents of Rucriminal.info talked with sources, in front of whom the ideology and types of executions were changing in Wagner PMC. We present this story with small cuts:

“PMC “Wagner” went through a number of military conflicts, completely different in nature, so the changes within “Wagner” were constant.

In order to come to an understanding of the topic of torture and executions of Wagner, first you need to understand the key difference between this PMC and other PMCs in the world. If all armies and PMCs try to avoid frontal attacks involving large assault groups, then for Wagner this is just about the main feature. The first large-scale campaign of the Musicians was Syria.

The main enemy in Syria was initially "foreign": Dmitry Utkin laid down his primary, understandable majority of the first fighters, a nationalist philosophy: "we are Slavs, Russians, whites." It wasn't exactly racist, but there were racial overtones, of course. And in Syria itself, the local population was generally not perceived very well: the Assad soldiers were distinguished by cowardice and far from the best training, they could betray for many reasons, the opposition also did not suffer from humanism, but ISIS completely turned executions into a form of "torture art" with beautiful shots and non-trivial plots.

At that time, Wagner was still taking shape and looking for himself: even the 500th in Syria were treated rather mildly - they were simply thrown into unloading and loading operations, using them as loaders. Efficiency was at the forefront even then, but even in heavy assaults, they usually lost somewhere around 10% of people.

And then there were a lot of Cossacks among the Musicians - specific people in the war, more ostentatious. Since there was enough free time in Syria, and the hostilities were not of the total nature of artillery and other hunting for each other, somehow imperceptibly for everyone, a habit appeared to bring the severed heads of "ISIS" - at first they even paid for them. Not much, just a few dollars, now it's hard to even remember. The practice of paying had to be stopped, because they began to carry a lot of heads: no one would understand by the bearded head whether the ISIS fighter was really finished off, or it was just someone who got under the arm. The locals still didn't like it.

But the sledgehammer first began to be used even then, but it was used against Assad deserters. They were conditionally "Assad": they had their own groups, which had their own commanders and themselves were more like PMCs (only of the Syrian spill, that is, more of an orgband).

Wagner, nevertheless, was a mercenary structure, which means that in addition to the army's simplicity and effectiveness, the emphasis is on rituals and other demonstration methods. And with sledgehammers they often beat the deserters of Assad.

With the ISIS, everything was much tougher, because they tortured the prisoners harshly and always. Accordingly, they, too (as well as sympathizers, those involved and suspects) were mocked as they wanted - creativity was allowed and at least not punished. In addition, the availability of free time contributed, which is already there. 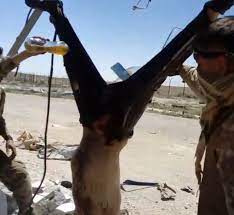 The atmosphere in the Donbass was like this: complete chaos, chaos and looting, disguised as a war. Even then it was obvious that it was looting and their own systems of "judicial trials" that corrupted even good and intelligent fighters. As for the cruelty itself, the Donbass could give odds even to Syria: cruelty here often took the form of manic sadism, which everyone was engaged in.

At the same time, torture remained the simplest and most effective way to obtain information. On the whole, in Wagner, such entertainment of individual fighters was looked through with fingers, although they were never encouraged. The more hostilities there were, the more efficiency was manifested - to finish off or shoot faster, but not to waste time and energy. Those who cycled on violence and torture, as a rule, either did not differ in zeal in battle, or died quickly enough themselves.

A new phenomenon that has taken on a large scale is the real-life torture video market. There was a black market, there was a movement. Video buyers were different - from consumer goods to those who bought "exclusives": sometimes they even ordered a form of execution and torture. As soon as the authorities realized that the morale was not getting better from this, the activities of the Musicians were quietly stopped.

Systematically, torture and executions were brought under the jurisdiction of the Musicians' security guards. And with a sledgehammer they began to “tap” on their deserters.

Donbass also brought a culture of the criminal world and banditry. By the way, the military and security officers turned out to be quite weak in the face of this challenge: the criminal culture (despised, it seems, as they do) weakened them from the inside, transferring goals from really combative to mercantile ones.

The beginning of the war was chaotic and very similar to what was already in the Donbass, but very quickly this war became completely different.

Russia lost the ideological battle before February 24, because the local population in the cities it occupied did not feel much sympathy for the Russians and directed art at everything that it could lead to.

The military began to solve the problem simply: they shot the locals on the slightest suspicion, interrogated them fully, harshly. And they miscalculated: these are not Arabs, here instead of fear you get frenzy and anger in response.

When a mass recruitment of criminals began in Wagner, discipline was generally screwed up to a level that had never been born in an ordinary army.

At the peak of recruitment from the zones in Wagner, they shot their five hundredths, refuseniks and daring ones in much larger numbers than they shot prisoners. Looting and rape are taboo, because where a marauder or a rapist is born. fighter dies.

Inside the Musicians, various executions are already a full-fledged kind of folklore. Prigozhin has a video on his phone where the hijacker was skinned alive and put under a drip to suffer longer. He showed this video many times - to show what will happen if you kill the commander. It was for criminals, but in general - a working thing.

There were sophisticated executions and torture, but as soon as they received evidence in the form of videos, etc., each time it turned into problems. Yes, and Isis, with its cinematic approach to executions, laid its foundation - perhaps it was after them that for some time there was a fashion for "originality".

“Veterans” of Muzykants say that the level of cruelty in torture also depended on the tightness of the intersection with other units - this is like an option to “measure pussy” in a military environment, who is cooler and tougher in implementing the execution. Now the Wagners operate mostly on their own, which also does not contribute to the "spirit of competition" in sophistication.

Stories about original executions are circulating, but where is the truth and where is folklore - you can’t figure it out. From the "classics" of the early Donbass - cutting the stomachs and pouring salt into it, tying hands to the exhaust of a tank, cutting off teeth with a file, chopping off hands and feet and leaving them to die, "roasting on a spit", castration, and, of course, cutting off heads. Of the especially perverted methods - the accurate passage of bath shadows through the body and switching on for heating, partial burning (they bind, pour gasoline on the brush or feet, set fire to it).

Each new stage of the war made its own adjustments, but on the whole, Wagner clearly followed the path of discipline. The main type of execution inside the structure is execution, a sledgehammer is exotic, a symbol. Well, what exactly is used by the security guards during the inquiry - only they know about it. Because those who came to them for a tough interrogation will not tell anything, and in such cases the bodies are usually burned.