Deripaska on guard of "thieves in law" In Spain, the trial of the "thief in law" Tariel Oniani (Taro). 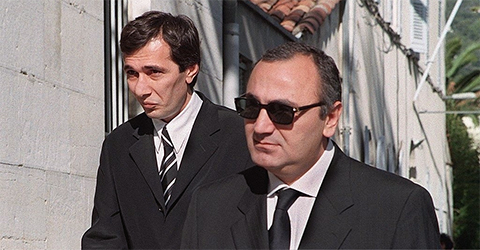 Initially, he was accused of money laundering and the leadership of the criminal community. However, the Spaniards had to drop the charge of laundering. This was a condition of Russia during the extradition of the thief in law. Why did the Russian Federation so insist on the removal of charges of legalization? Because, according to Rucrimianl.info, in Spanish materials it was mentioned that Oleg Deripaska used the “laundering” channel of “thieves in law”. And this is not at all surprising. One of the beneficiaries of this channel was “legalist” Vladimir Tyurin (Tyurik) - Deripaska's long-time acquaintance and business partner. According to Spanish investigators, a whole group of “thieves of law” stood behind the money laundering channel, the main of which were Zakhar Kalashov (Shakro Molodoy), Tariel Oniani (Taro), Vladimir Tyurin (Tyurik). Each of them maintained close relations with different oligarchs. In particular, Vladimir Tyurin was close to Oleg Deripaska and actively helped him in the aluminum wars in Siberia. As Rucriminal.info already said, Tyurik and Deripaska were introduced by the “right hand” of the latter Arkady Sargsyan. As the Spaniards established, Vera Metallurgica, controlled by Iskander Makhmudov and Oleg Deripaska, "laundered" money from this feed through this channel. Vera Metallurgica actually performed the role of the Spanish "daughter" of the Ural Mining and Metallurgical Company.

Just during the period of the active activity of the washing channel (2001-2005), the Spanish and Russian special services recorded repeated cases of close, partnership communication between Deripaska and Tyurik. So, in February 2003, Tyurin flew with Oleg Deripaska to Bratsk to celebrate the anniversary of the Russian Aluminum company, and then participated in the meeting of shareholders of Irkutskenergo. At the same time, they discussed matters. Shortly afterwards, on March 20 and 21, 2003, Tyurin took part in a representative gathering, which was also attended by thieves Zakhar Kalashov (Shakro-young), Aslan Usoyan (Ded Khasan), Vitaliy Izgilov (Beast), Tariel Oniani (Tarot), Merab Gogia (Merab or Melia), Jamal Khachidze (Jamal), Vakhtang Kardava (Vakho), Mamuka Mikeladze and Armen Arutyunov, criminal authorities and "authoritative businessmen" Konstantin Manukyan and Leon Lann. At the event, Tyurin, according to Rucriminal.info sources, represented not only himself, but also defended the interests of Deripaska. The meeting was dedicated to the celebration of Kalashov’s birthday and was held in Alicante at the Montiboli Hotel. Now Oniani’s main accusation (of leading the criminal community) is based precisely on his participation in this gathering. Oniani's sentence will soon be handed down; he is not threatened for more than four years. Shakro has already served a long time in Spain for laundering, more than nine years. Tyurin is put on the international wanted list by Spain. In 2011, he was arrested in Moscow. At the same time, Tyurik's Russian passport was invalidated, they were going to extradite him to Spain. But unexpectedly, some influential forces helped the thief in law. Law enforcement officers played the situation back: they returned Tyurin the passport of a citizen of the Russian Federation and refused to issue it to Spain as a Russian. When it was time to extradite Tariel Oniani, then in Russia he insured himself and ordered the Spaniards to drop the charges against thief in law2 for money laundering.

Madrid was investigating another money laundering case in which Deripaska and Makhmudov were accused. But Russia (and Deripaska also says that he does not enjoy the support of the authorities? :-)) has found a way to solve this problem. The Prosecutor General’s Office of the Russian Federation convinced the Spaniards to transfer all volumes of the case for investigation to Moscow, promising that Deripaska and Makhmudov would be punished to the fullest extent of the law. The investigation was entrusted to the Investigative Department of the Ministry of Internal Affairs of the Russian Federation, which then quietly covered up the case against the oligarchs.

Earlier, sources at Rucriminal.info said that Deripaska was always close to Arkady Sargsyan, who served as the head of the oligarch’s security service. “Arkady Rafikovich ... kicked open the doors to the rooms of the Family. It was he who brought Oleg Vladimirovich (Deripaska-Red) with Tyurik ("thief in law" Vladimir Tyurin-Red.) .. In fact, Sarksiyan in the "aluminum empire" is responsible for special projects. Tyurik is “torpedoes”, no more, but “torpedoes” need a “law enforcement roof”. Sargsyan solved these issues, ”this is how eyewitnesses described the role of Sargsyan under Deripaska.