What was engaged in the murderer Vlad Listyev after the crime

Interpol "led" the brigade leader of the killers, who dealt with the TV journalist 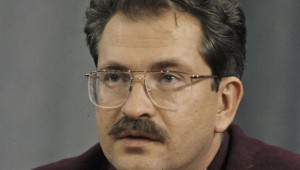 Rucriminal.com returns to the topic of the extensive activities of the Solntsevo criminal group. The editorial staff draws information from the report of Interpol, which includes intelligence information, reports from national bureaux of different countries, materials of "wiretaps" and surveillance of immigrants from the Russian Federation (primarily members of the Solntsevo group) and related individuals, businessmen, former and current officials. In this article, Rucriminal.com will continue the story of the brigades led by Alexander Averin (Avera Jr.), who died on October 12, 2017. One of them was headed by Mikhail Kudin, whose militants, according to Interpol, were killed in 1995 with TV journalist Vladislav Listiev. Also Rucriminal.com publishes a dossier on Alexander's brother Victor Averin (Avera Sr.).

According to the NCB of Interpol in Washington, the KUDINA brigade consists of two "subbrigades", led by Andrei SKRYLEV (who also "Hid", born on December 20, 1962), and Garabat Peter (also known as Petya). The KUDINA brigade was engaged in collection of payments extorted from Moscow's bankers and businessmen, the traffic of cocaine imported from Colombia, and the hijacking of Mercedes cars from "fake" victims (fictitious) in Poland, Bulgaria and East Germany. For the order of expensive cars of "Mercedes" brand front companies were used. KUDIN paid individuals to take vacations and left cars in a certain place, from where they would later be stolen. In addition, on behalf of the Solntsevo group, KUDIN supervised the work of two jewelry stores Vitali and Almaz in Moscow.175

The murder of the Russian journalist LISTEV was, according to available information, committed by a brigade of Mikhail Kudin.

KVAKIN Mikhail, also known as KUDIN Mikhail ("Kvakin"), was born on September 23, 1958 and, according to the NCB Interpol in Washington, he was the leader of one of the most active brigades of the Solntsevo group and was considered a "golden boy" and a "rising star" this organization.

KUDIN was arrested by the Greek authorities at the Athens Airport on July 6, 1995 for possession of 0.025 kg. heroin. During the arrest, 25,000 US dollars were confiscated from KUDIN. KUDIN was imprisoned in the "Koridallos" prison in Piraeus, Greece, but was subsequently released and returned to Moscow to lead his team. 178 As well as others, he was detained by the Czech police in Prague in May 1995 at the restaurant "In Holubu" .179

According to available information, at present Kudin is in Prague with Peter Garabat. He deals with the trafficking of heroin from Afghanistan to Russia through Europe and the illegal importation of Chinese immigrants.180

As mentioned above, Peter Garabaty headed one of the subgroups of the KUDINA brigade. Garabat had a conflict with local Bulgarian criminal groups in Sofia, Bulgaria, on the grounds of car theft. As a result of the firefight, Garabat and his people were forced to flee to Ukraine. During the conflict, 3 people were killed. Victims were Slava MOGILA and Vitya ARKHANGELSKY.181

(1) Garabaty is probably Petr Feliksovich GORBATHY, born. October 17, 1966 .. in Podolsk, who was the bodyguard of Mikhailov and was one of the leaders of the Solntsevo group. He has an apartment in Moscow at Vernadsky Prospekt, 59 / a, sq..., However he lives in Prague.182

KAZAKOV Yuri or KOZAKOV Yuri, who is also Yura, was also a member of the KUDINA brigade. He controlled the money of the Solntsevo group. As you know, he leads a team of five people. According to the available information for non-payment of debt, he ordered to burn the cafeteria, resulting in the death of 12 people.184

According to information received from another source, the 185 MUGUAN brigade controls 7 other brigades, such as:

STOLYAROV Sergey, he is also "Stolyar", b. October 13, 1963, is the brigade leader of the Solntsevo group. He made a trip to the United States on a fake passport, which was organized by the United States Trade Information Center.

b) The criminal organization "Matveevskaya", consisting of 25-30 people, led by Igor Pateev, he is "Ushasty".

c) the criminal organization Ochakovskaya, which consists of 15-20 people.

Consisting of 10 people, the group, which is run SERGUNOV Sergey, he is also "Semyon", genus. February 9, 1962 SERGUNOV still leads the group, but she is no longer a brigade, despite the presence of "soldiers". According to available information, while in Germany, he continues to work for the Solntsevo group.188

Russian citizen AVERIN Viktor Sergeevich, born in Moscow on May 31, 1957, is, together with Sergei Mikhailov, leader of the Solntsevo group.141

According to the NCB of Interpol in Jerusalem, AVERIN was assistant and right-hand man MIKHAILOVA. It is known that AVERIN was a professional boxer and previously worked in the guard. Several murders are associated with his name.142

He is also known as AVERIN Viktor Sergeevich, ...

• In accordance with the data of the NCB of Interpol in Kiev, Averin was the owner of Israeli passport No. 5877 .... In addition, he could own documents in the name of Pavel VORONKOV.145

• The address given to Interpol's NCB in Jerusalem coincides with the address of MIKHAILOV: Givati ​​16, Bat Yam.

In addition, it is known that Averin had apartments in Vienna (Austria) and Budapest (Hungary) .147

According to the NCB of Interpol in Moscow, Averin is the founder of a number of commercial enterprises that were created to provide finance to his group. Together with his brother and Mikhailov, he was engaged in extorting money and cars from Vadim ROZENBAUM, and was placed under pre-trial detention. (See the MIHAILOV pairs) 148

Since the end of 1993, AVERIN and MIKHAILOV were outside of Russia.149

In 1993 Averin, MIKHAILOV and their families moved to Vienna, Austria. In this they were helped by Werner Kohler.

From Vienna, Austria, in 1993, AVERIN (as well as MIKHAILOV) emigrated to Tel Aviv, Israel. According to the data of the NCB of Interpol in Jerusalem, AVERIN became an Israeli on September 6, 1993. Averin is known to Interpol's NCB in Jerusalem thanks to a fictitious marriage. His wife confirmed that in June 1993, she flew to Budapest (Hungary) to conclude a marriage with AVERIN, for which she received $ 2,000. After the wedding ceremony, she flew back to Israel and never met with Averin. Under Israeli law, without being a Jew, one can obtain Israeli citizenship by marrying a Jew. AVERIN is not Jewish, and was already married at the time of acquiring citizenship. He was included in the list of persons who should be deprived of citizenship and brought before the court.151

On October 27, 1995, AVERIN left Israel and traveled to Frankfurt, Germany. On December 13, 1996, AVERIN entered into a marriage with a Hungarian citizen and in 1997 sent a request to the Hungarian authorities for permission to immigrate. Perhaps AVERIN was banned from entering a number of countries, such as France, Britain, the Czech Republic and Austria.153

The Interpol NCB in Bratislava confirmed that AVERINA

Police authorities in Paris investigated the activities of AVERIN and other immigrants from the former Soviet Union who ran companies located in Switzerland.155