The Scam with money for the CCAD led to Aras Agalarov 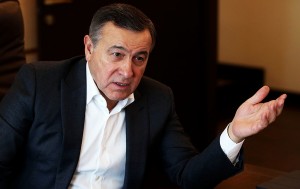 On July 4, it became known that a criminal case was opened against the former Chairman of the Board of the state company "Avtodor" Sergey Kelbach on the fact of abuse of power. The former official, who is now an adviser to the General Director of Russian Railways Oleg Belozerov on investment issues, is charged with three criminal episodes, including the illegal advance in 2017 in the amount of 2 billion rubles. JSC "Crocus international" Aras Agalarov, involved in the construction of the Central ring road (CKAD) in the Moscow region.

The criminal case was initiated by the audit chamber. The auditors found that AVTODOR group and Crocus international did not fulfill their obligations, which led to an increase in the cost and timing of construction. Instead of the allowed 30% of advance payment in the amount of 12.6 billion rubles. "the Crocus Interneshnl" has received from "Avtodor" 14.6 billion rubles, which is 35%. Actually performed work was 23.4%. Moreover, instead of the planned 1.1 thousand workers and 638 machines at the facility during the inspection, 50 workers and 30 pieces of equipment were recorded, which caused indignation of the auditors. The investigation and the FSB suspect that there is collusion between them.

Here are excerpts from the act of the Russian joint venture that has Rucriminal.info "For 2017 was adopted in the amount of 6 bln (23.4% of the prescribed amount of 2017). The technical readiness of the facility is only 15.6%, with the stipulated period of its commissioning – December 2018.

In accordance with the project of organization of construction in 2017, the facility provides for the location of 1,097 workers and 638 machines and mechanisms. At the same time, a visual inspection by the representatives of the accounts chamber showed that there were less than 50 workers and no more than 30 pieces of equipment at the construction site.

In violation of the terms of the long-term investment agreement on the construction of the launch complex No. 1, according to which the state Company has the right to pay an advance to the contractor (Crocus international JSC) in the amount of up to 30% (12.6 billion rubles) of the total amount of state financing of construction, Avtodor provided advance payments in the total amount of 14.6 billion rubles (35%).

Sources Rucriminal.info I believe that the charges are in addition to Kilbaha will be presented to the owner of "Crocus international" Aras Agalarov (father of the singer Emin). If he falls under a criminal case, you can "float" interesting details from the past Agalarov. Remember them.

Already in 1997, Aras Agalarov, eight years ago selling matryoshka dolls, built an elite complex "Agalarov House", located in one of the most fashionable areas of Moscow - the intersection of Bolshaya Gruzinskaya and klimashkin streets. In 2005 Agalarov becomes the owner of the furniture center "Grand", together with businessmen Year Nisanov and Zarakh Iliev. The former Chairman of the State customs Committee Mikhail Vanin, his close friend, helped Agalarov to gain control over the largest furniture store in the capital. Thanks to the acquaintance with the "head of customs", the Azerbaijani businessman should be said that not only acquaintances with officials helped Aras Agalarov build his Empire. According to Rucriminal.com he has been friends with the "thief in law" Vagif Suleymanov for many years, who was once a colleague of the oldest Russian "authority" Grandfather Hassan (Aslan Usoyan). In 2013, Grandfather Hassan was killed by a sniper, and his place was taken by Shakro Young (Zachary Kalashov), who brought Suleymanov closer to him. Therefore, when the Year nisanov and Zarah Iliev created agro cluster "Food city" and they had a problem with wholesalers, they turned to Agalarov. By the way, this is the largest agricultural market was presented in 2014 with the participation of mayor Sergei Sobyanin.

The problem was that the trade mafia (mainly Azerbaijanis) was dispersed in different markets of Moscow-Moscow region, traders worked under different "roofs" and were not going to move to "Food city". It turned out that huge areas would stand idle and would not bring profit. Nisanov and Iliev via Agalarov appealed to Vaqif Suleymanov, and he shared his problem Shakro Young. Since the project "Food city" promised to bring two "thieves in law" constant huge profits, Shakro gave the nod and wholesalers "organized" moved to "Food city". All the problems with the Azerbaijani "authorities" to be resolved peacefully.expand your business.

But not always the criminal showdown ended in "peace" - in April 2006 in Moscow was killed one of the Azerbaijani criminal leaders, the famous "thief in law" Ikmet Mukhtarov. According to investigators, the murder was due to the redistribution of control over income from several large markets and shopping centers in Moscow. Several Chechen and Azerbaijani criminal clans have allegedly been waging this war for a long time. During the investigation it was established that according to documents, the Mercedes car in which salon Mukhtarov was killed, belonged to one of cofounders of holding "Crocus international" – to Rail Zeynalov. This holding includes hypermarkets "Your house", shopping Mall "Crocus city Mall", exhibition complex, boutiques of fashionable clothes and luxury shoes "Crocus Moscow" – the whole Empire of Aras Agalarov. It turns out that the dead "lawyer" drove the car of the founder of "Crocus international".

Such "accidents" clearly demonstrate the links of business with the criminal world, when personal acquaintances are supported by cash flows and financial obligations. Behind many representatives of legal business there are "shadow" patrons and secret sources of criminal financing.