Zingarevich pulled to the "bottom" "Bank of St. Petersburg"?

CBR believes that the brothers will never pay the Bank

As expected rucriminal.info, " Bank of St. Petersburg "and the structure of Mikhail and Boris Zingarevich - JSC" orange development "and LLC" Plaza Lotus group " -have not yet signed a settlement agreement. The credit institution requires the family structures to pay the debt under the loan agreement in the amount of 400 million rubles and interest in the amount of 280 million rubles. And this is only a "small part" of what the Zingarevichs have borrowed from the "Bank of St. Petersburg" and return, according to sources rucriminal.info not going to. When the Bank filed to the Arbitration court, Zingarevich immediately requested about the world of the arrangement. However, it was not signed by the deadline set by the court. As a result, the hearing was postponed to April. "The Zingarevich has no money, they are just stalling. I do not understand how they can conduct any negotiations," the source said rucriminal.info the market. According to him, it is understood in the Central Bank and at the end of 2018 in the Bank of Russia demanded from the "Bank of St. Petersburg" additional charge of reserves by 50% of the amounts of loans issued to structures Zingarevich and transfer them to the reporting of the Bank in the 4th category, that is actually recognized irrevocable. "We are talking about very large amounts, 400 million rubles is only the" tip " of the iceberg, and the owners of the Bank were in a difficult situation. Even the question of possible rehabilitation was raised. Although, of course, I do not think that one of the largest Russian banks will be sanitized. But while a common language with the Central Bank of the Russian Federation until the end could not find," says source rucriminal.info. Earlier, the Bank of Russia even appointed to "Bank Saint Petersburg" its authorized representative.

As for the family of Zingarevich, recently they actively tried to solve problems with law enforcement agencies of the son of Boris Zingarevich Anton who was put on the wanted list for embezzlement of the credits. Fortunately for the brothers, the case was extremely accommodating Investigative Department of the MIA of Russia, which unexpectedly closed the criminal case. But Anton was in no hurry to return from the United States and England to Russia. And rightly so. The Prosecutor General's office showed principled and the decision to close the case was canceled.

Rucriminal.info continues to publish the materials of the investigation against Anton Zingarevich and his top Manager Shishkin. From the materials below you can see how Anton took loans from other banks under the pretext of repayment of debts to the "Bank of St. Petersburg", and then the money went offshore. About what the ratio of these offshore companies had Boris Zingarevich Rucriminal.info will tell soon.

"Shishkin K. A., being the General Director of JSC" ESIH "and the sole Executive body of the borrower - LLC" NIK", signed a loan application dated 03.12.2013 for the loan of LLC" NIK "in the amount of 1.5 billion rubles, which was provided to the Bank and 25.12.2013, signed an agreement on the opening of the credit line № 1-141-on/13 with JSC" GLOBEXBANK", with a maximum amount of the debt limit of not more than 1.5 billion rubles, the loan repayment period 24.12.2015 year and the purpose of lending – financing activities under the Charter of the borrower (replenishment of working capital of the Company).

From the presented materials of the case it is seen that the borrowed funds received by LLC "NICK", part of the holding company "ESIH", under the loan agreement in the amount of 1.5 billion rubles in the end in the same amount were sent to the account of LLC "IC Energo", also part of the holding company "ESIH", to repay the loan obligations of the latter to the branch of JSC "Bank of St. Petersburg" in Moscow under the loan agreement № 7700-11-00049 of 30.09.2011", - stated in the materials, which has Rucriminal.info ahhh!

"According to the charge brought against Shishkin K. A., after crediting of credit funds to the settlement account of LLC NIK on 25.12.2013, participants of the organized criminal group headed by Zingarevich A. B. had a real opportunity to dispose of them at own discretion, in interests of the organized criminal group. For the purpose of concealment of traces of perfect plunder Zingarevich A. B., together with Shishkin K. A. and unidentified partners decided to manufacture and make available in the specified Bank documents allegedly showing the use of "NICK" of cash for purposes of the credit, for their subsequent transfer to the controlled entity and dispose of them at its discretion; for that Zingarevich And B through K. A. Shishkin were instructed to unidentified partners to produce and submit to CJSC "GLOBEXBANK" - supply contract № 0613-23 from 12.03.2013, specification order No. 1/0613-23 from 12.03.2013 to the above contract and invoice SSK, OOO No. 1092 dated 24.12.2013.

According to the charges against Shishkin Ka, 27.12.2013 he signed a loan agreement № 3229-1 / 13-K in the amount of 1 billion. rubles, the loan repayment period 01.04.2015 year and the purpose of lending – financing of the activities provided for by the Charter of the borrower (working capital replenishment), and, after transferring the specified amount from the account of MTS-Bank PJSC to the account of IC Energo LLC, the funds were subsequently directed to the provision of a cash loan to a foreign company blaine overseas venture Corp."("BLAINE OVERSEAS VENTURE CORP."), the purchase of promissory notes of foreign companies "the Econoline resors limited" ("ENONOLINE RESOURCES LIMITED"), as well as for partial repayment of credit obligations of OOO "IC Energy", the branch of OJSC "Bank Saint Petersburg" in the city Moscow under the credit agreement № 7700-11-00049 on 30.09.2011 year, which, according to the investigation evidence of embezzlement of credit funds". 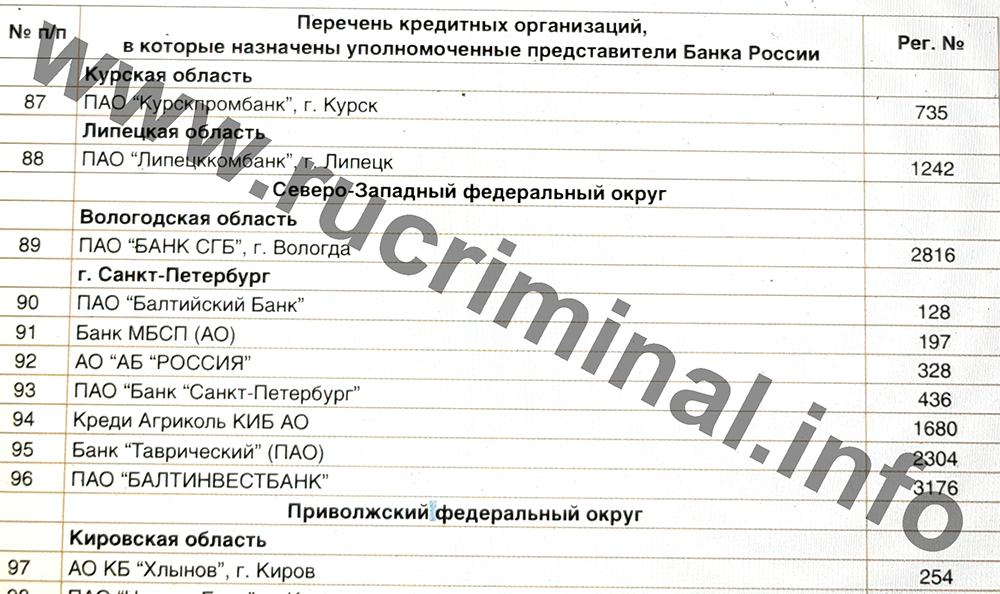 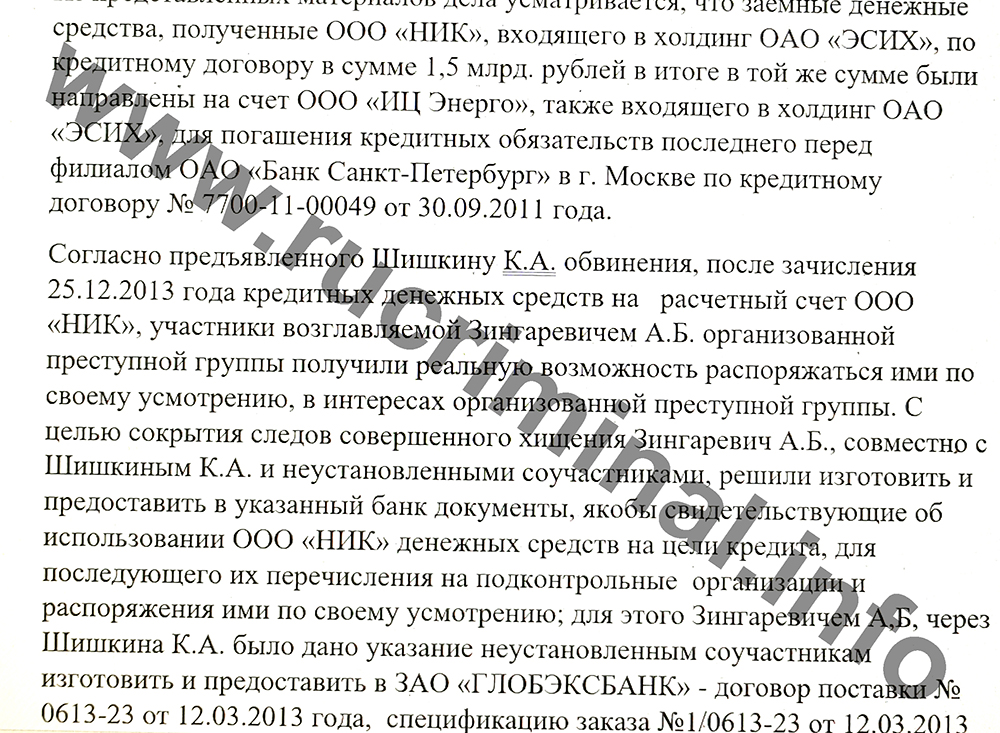