"For $ 300 thousand the situation was not interesting to him, but for $ 500 thousand he agreed" 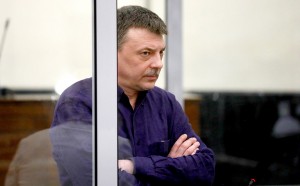 Alexander Lamonov, former deputy head of the department of his own security of the Investigative Committee of Russia (TFR), who was convicted of bribing officers of the TFR for the release of “authority” Andrei Kochuykov (Itadyanets), the “right hand” of the thief in law Zakhari Kalashov, was released on parole (Shakro Young). Lamonov, in turn, was the "right hand" of the chief security officer of the TFR, Mikhail Maksimenko. According to the materials of the case, which is at the disposal of Rucriminal.info, Lamonov knew almost everything about corruption cases in the TFR, which of the mafiosi, billionaires, deputies and which bribes he paid. Often he discussed his knowledge over a bottle of vodka with Maksimenko, and the FSB officers recorded these conversations. Today we publish the evidence that Lamonov gave during the investigation. The witness was informed about this situation by Maksimenko M.I., who asked for details of this case. In this regard, he requested information on this case from the General Directorate of the Investigative Committee of the Russian Federation for Moscow.

Further Bogorodetsky D.A. repeatedly informed him that information related to the investigation of the above criminal case comes to persons from the criminal environment (he did not specify to whom exactly). These persons, according to D. Bogorodetsky, may be trying to resolve the issue of exemption from criminal liability A. Kochuykov

Around the beginning of March 2016, meeting in the apartment of M. Maksimenko with D. Nikandrov, he asked about the progress of the investigation into the incident on the street. Rochdelskaya and asked the latter to change the investigator in this case.

Somewhere in early April 2016, D. Nikandrov or Maksimenko M.I. said that in the actions of A. Kochuykov extortion is not seen, and his actions will probably be re-qualified for arbitrariness or hooliganism, about which he (Lamonov D.A.) informed Bogorodetsky D.A.

After some time, Bogorodetsky D.A. at the meeting, he told him that certain persons (supposedly someone from the acquaintances of A. Kochuykov, possibly a classmate) continue to try to resolve the issue of the release of A. Kochuykov from criminal liability and offer for this 300 thousand US dollars, including for the re-qualification of his acts to less serious ones.

In this regard, the witness turned to Maksimenko M.AND. and informed the latter that if the case of the incident on the street. Rochdelsky action Kochuykova A.N. If they are retrained for a softer article, then certain people are ready to give 300 thousand US dollars for this.

That day Maksimenko M.I. did not answer anything, in connection with which he (Lamonov A.N.) and Bogorodetsky D.A. felt that he was not interested in this situation due to the insufficient amount of the proposed funds, therefore, during a joint discussion, they decided to raise the amount of remuneration to 500 thousand US dollars. This proposal Bogorodetsky D.A. had to bring it to interested parties, ”says the materials at the disposal of Rucriminal.info.

“The question of the re-qualification of the charge, A. Kochuykov with Maksimenko M.I. had not been discussed before, however, from communication with the latter it was clear that he (Maksimenko MI) or one of his friends was already dealing with this issue. Also, information was received from various sources that, in the interests of persons from the criminal environment, someone had already begun actions to resolve the issue of A. N. Kochuykov.

After some time, Bogorodetsky D.A. said that "people" agree to the terms.

Around the end of April 2016 Bogorodetsky D.A. came to his work and in his office handed over money, packed in a shoebox, in the amount of 500 thousand US dollars.

A few days later Maksimenko M.I. called him and asked to go to his office. During the conversation, Maksimenko M.I. said that a decision had been made on the re-qualification of the case Kochuykova A.N. under the article "arbitrariness", i.e. to a less severe article of the Criminal Code.

After that, Lamonov A.N. went into his office, took the money from the safe and brought it to Maksimenko M.I. However, Maksimenko M.I. I didn’t take them, because I was planning to leave for St. Petersburg, saying that I would discuss this issue after the weekend. The next day, Maksimenko M.I. informed him that some problems had arisen that needed to be resolved in order to retrain the case of A. Kochuykov In this regard, he asked Bogorodetsky D.A. take a trip to Maksimenko M.I. home for information.

On the same day Bogorodetsky D.A. after meeting with Maksimenko M.I. informed him that the latter stated that at present, to mitigate the qualifications of the act, A. Kochuykov nothing can be done, for this it is necessary to assist in ensuring that A. Kochuykov pleaded guilty to a crime of minor gravity and confessed. However, Bogorodetsky D.A. reported that he could not affect this.