"I warn you, someone will die" 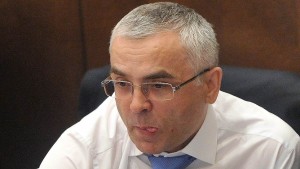 The VChK-OGPU telegram channel has published a video showing the visit of yesterday's Federation Council member from the Khanty-Mansi Autonomous Okrug Viktor Pichugov with security to the office of businessman Nikolai Vasiliev. The ex-senator did not find the owner of the office, so he said hello to him in words: “Give Vasiliev a wish. Let him close the topic on good. I'll find it, I'll make you eat shit. Do not touch this person, otherwise I will return and punish ”. So Pichugov demanded to transfer the 6-storey building with retail premises belonging to Vasilyev, located in Nefteyugansk.

According to Rucriminal.info, Pichugov said not to touch Knyazev Yu.G. -, a person who shoved his "debts" onto a former partner, Vasiliev N.A. (thanks to this, the criminal prosecution of N.A. Vasiliev began from 2014-2015, which continues to this day). Knyazev is Pichugov's ex-husband of his sister.

Two people came with Pichugov. A man in a brown jacket is an approximate, one might say a security guard, a deputy of the KhMAO Duma Vladimir Nikolaevich Semyonov. At the disposal of the editorial office there is an audio recording where the representative of Vasiliev is threatened by a friend and business partner of ex-senator Hasanov Galib Gaidaraga oglu. He promises that if his demands are not met, then soon "someone will die." Rucriminal.info publishes a chronology of the events of this conflict.

Nikolai Vasiliev, with the attraction of investment funds, built and put into operation an administrative building with retail premises in Nefteyugansk. Soon the representative office of Vasiliev N.A. - Kamaltdinova R.S. there was a former member of the Federation Council of the Federal Assembly of the Russian Federation from the Khanty-Mansiysk Autonomous Okrug - Yugra Pichugov Viktor Alexandrovich with two guards, the name of one of the guards is Oleg, and the name of the second guard is unknown, but it is known that at that time he was also the guard of Semyonov Vladimir Nikolaevich , who at that time was the head of the Nefteyugansk region. Also with him was the aforementioned Knyazev Yuri Georgievich, who was interested in the outcome of the case, who was the director of Uralazavtoservis LLC, but Kamaltdinov did not let him into the office, left him outside the door.

During the said visit Pichugov V.A. expressed threats to the life and health of N.A. Vasiliev, and also asked his representative, R.S. Kamaltdinov. to convey to N.A. Vasiliev these threats and his demands for the need to "close the topic" about which he knows. Pichugov V.A. threatened to find Vasilyev N.A. and make "shit eat". As follows from the meaning of the above and the fact that the said threats and demands to N.A. Vasiliev were transferred through his representative for the management and disposal of Vasiliev N.A. administrative building, the essence of the requirement of Pichugov V.A. was reduced to the transfer of Vasiliev N.A. administrative building with retail premises.

According to a source of Rucriminal.info, Pichugov V.A. acted together with brothers Hasanov Galib Gaidaraga oglu and Hasanov Elshad Gaidaraga oglu. This is evidenced by the fact that together with Pichugov V.A. came Knyazev Yu.G., who was the director of LLC "Uralazavtoservice", between which and the investors Gasanov G.G.o., Gasanov E.G.o. an investment agreement No. 2 was concluded, according to which the investment object is a premise with an area of ​​600 sq.m., located on the 1st floor of a building under construction.

The fact of the visit of V.A. Pichugov, his threats and illegal demands to N.A. Vasiliev. was recorded on a video recorder installed in the office of his representative for security purposes.

On the statements made by V.A. Pichugov. threats Vasiliev N.A. did not take any action to fulfill his unlawful demand to transfer the administrative building belonging to him.

04/01/2017 to the office of the representative N.A. Vasiliev - Kamaltdinova R.S., Hasanov G.G. appeared. together with two local "crime bosses" whom he called Ruslan and Marat. These persons beat R. S. Kamaltdinov, thereby causing harm to his health, and under the threat of his murder, the murder of his relatives and friends, they forced him to write a statement that he undertakes to re-register GG Hasanov within two weeks. the entire first floor belonging to N.A. Vasiliev the above administrative building. In case of non-fulfillment of these requirements or filing an application with the law enforcement agencies, these persons threatened to kill R.S. Kamaltdinov. and his family members.

In connection with the above Vasiliev N.A. was forced to withdraw the issued to Kamaltdinov R.S. power of attorney for the management and disposal of the administrative building with retail premises belonging to him.

The specified persons after beating Kamaltdinov R.S. from the office where this took place, they seized two video recorders along with the copies of the video recordings they contained.

The described circumstances indicate that an organized group of persons consisting of GG Hasanov, VA Pichugov, “crime bosses” Ruslan, Marat and other unidentified persons is trying to illegally take possession of NA Vasiliev. property, using as a means of influencing him to achieve his criminal goals threats to his life and health, life and health of his relatives and friends, causing harm to the health of his representative Kamaltdinov R.S.

In addition, these persons used their corrupt connections in the law enforcement agencies of the city of Nefteyugansk to illegally initiate against Vasilyev N.A. the above criminal cases and his illegal criminal prosecution in order to render to Vasilyev N.A. pressure to achieve their criminal goals of taking possession of my property.