"I realized that I took part in Listyev's murder" Rucriminal.info continues to publish the testimony of professional killer Andrei Chelyshev. At one time, he, together with members of his group, professional mercenaries, committed a whole series of resonant murders, most of them using sniper rifles. For example, according to the collected evidence, it turned out unambiguously that Andrei Chelyshev and his brother Sergei were the perpetrators of the execution of the vice-governor of St. Petersburg Mikhail Manevich in 1997. Immediately after his arrest, Andrei Chelyshev confessed to the murder of Vladislav Listyev. He was interrogated by the investigator of the Prosecutor General's Office Pyotr Triboi, who died the other day. It took him a lot of time to work out Chelyshev's testimony. Probably, now the investigators would gladly hang on such a confessing Listyev and anyone else. But Triboi was an old school investigator and did not allow himself to be led by the nose. Even before leaving for the crime scene, Triboi piled up Chelyshev with clarifying questions. There were many of them. For example, about whether there are rails near Listyev's house. Chelyshev replied categorically that no, then, as tram tracks pass right under the windows of the TV presenter's house. At the scene of the crime, Chelyshev completely "showered", it became clear that he was lying. He killed many people, but not Listyev. Why did the killer decide to take on Listyev? He was persuaded to do this by the head of the 10th department of RUBOP, Vitaly Serdyukov, who led the arrest operation and accompanied the killers from Kyrgyzstan to Moscow. In turn, Serdyukov was asked about this by the real customer of Listyev's elimination - Sergey Lisovsky. Lisovsky and Serdyukov studied together and were friends from their youth. Lisovsky wanted, with the help of Chelyshev, to put the Listyev case on the wrong track forever. Did not work out. However, it did not work to put Listyev in prison, since the family of Boris Yeltsin stood up for him. It is worth noting that the "false trail" is not the only problem faced by Triba. The operational officers did not bring any useful information, but only let the investigator go in the wrong direction. Listyev's wife Albina, Boris Berezovsky, Listyev's "friends" - Konstantin Ernst, Alexander Lyubimov, Leonid Yakubovich, and others categorically refused to cooperate. And they all knew who and for what killed Listyev. He shared his problems with them. A few friends started talking, and then unofficially (without a protocol), when the tax authorities began to "shake" them on the go-ahead of the Prosecutor General's Office. They said that Listyev had very unpleasant conversations with Lisovsky, then persistently recommended not to stop advertising on the First button and not to move Lisovsky's structure away from advertising sweats. Listyev knew that Lisovsky was connected with the bandits, but he was sure that he, a man whom the whole country knows and loves, would not risk killing him. Listyev realized that all of him had actually been drained and that he was walking "under the bullet" only a couple of days before his death. I talked about this to my “friends”, but the “death machine” could no longer be installed.

Rucriminal.info gives the second part of the killer's testimony.

"Protocol of interrogation of A. A. Chelyshev on the murder of Listyev

When we were driving from Konkovo, we did not pass by the station, when I was already driving, after the murder I drove along this street to Paveletsky railway station. The driver stopped the car at the roadside on the street along which we were driving. The car did not turn into the yard. The three of them got out of the car, the bearded man told me to get behind the wheel and not turn off the engine. They walked down the street in the direction opposite to the movement of the car, where they turned, I did not pay attention. I did not see any firearms in the hands of the guys, any parcels, bags, etc. they did not have with them. I sat in the driver's seat and waited for them. I remember that the fuel gauge and interior lighting, radio tape recorder did not work. I waited for the guys for a very long time, at least 1-3 hours. The guys came up unexpectedly, the Caucasians sat in the back seat, the Russian guy sat in the front. They were calm. The guy who previously drove the car told me to get off. When he got into the car, I saw that he had a radio station in his breast pocket with a thick black antenna and two switches on the top panel. I saw the radio station because before the guys came, I leaned back against the back of the seat all the way back, actually reclining in the cabin. When the guy opened the back door to the salon and bent over, I kind of looked into his pocket. It is possible that I can identify the radio station that I saw at the guy by its appearance. Having left for the Peveletsky railway station, we drove along a wide street with multi-lane traffic. The guy who was sitting behind me, who had previously driven a car, told me where to go, saying: "straight ahead", "left." He said only one phrase "now I will get my twenty." Thus, we reached the Yaroslavl highway. Having passed under the MKAD bridge at the direction of the driver and stopped the car at the side of the road. As I got out of the car, I heard the guy-driver say, "Well, now Cher will owe us." And then he added "Docmissed ”, whom he meant I did not know. “They didn't give me any money, a Caucasian man got behind the wheel at the Moscow Ring Road, a bearded guy sat in the back left behind the driver's seat, I sat in the back seat and sat on the right. I was dropped off near the turn to Ivanteevka, not reaching the traffic police post. - 2 from the words of my mother, I learned that unknown people came to my home in the Lipetsk region in a car, asked me, but then I was already in the Tambov region.

In my opinion, the very next day I learned from my wife that Listyev was killed that evening when I was traveling with the guys. At first, I did not even associate this murder with my trip, but later, comparing the reports about the circumstances of Listyev's murder in the media with the circumstances under which I spent that evening, I realized that I took part in this without knowing it. crime. After a long time, maybe a year or two later, I learned from Yuri Volkov that a guy named "Sherkhan" was killed in Moscow, he was shot from a machine gun. The fire was fired from a dark-colored VAZ-2109 car, with tinted windows, without license plates. Yura said that "Sherkhan" is a close person for Zaur, I can assume that he is a relative. When I heard about this, I realized who was the man who first approached me at the clothing market in Konkovo. In conclusion, I want to add that I only told Popov Sergey Nikolaevich about my participation in Listyev's murder. I told him about this in the car when we were driving somewhere along the highway. For a long time, I can not literally reproduce my story, most of my story to Popov is fiction. I can recall the following about the details of that conversation. I told Popov that Listyev was "led", information about his arrival was transmitted by radio ”. 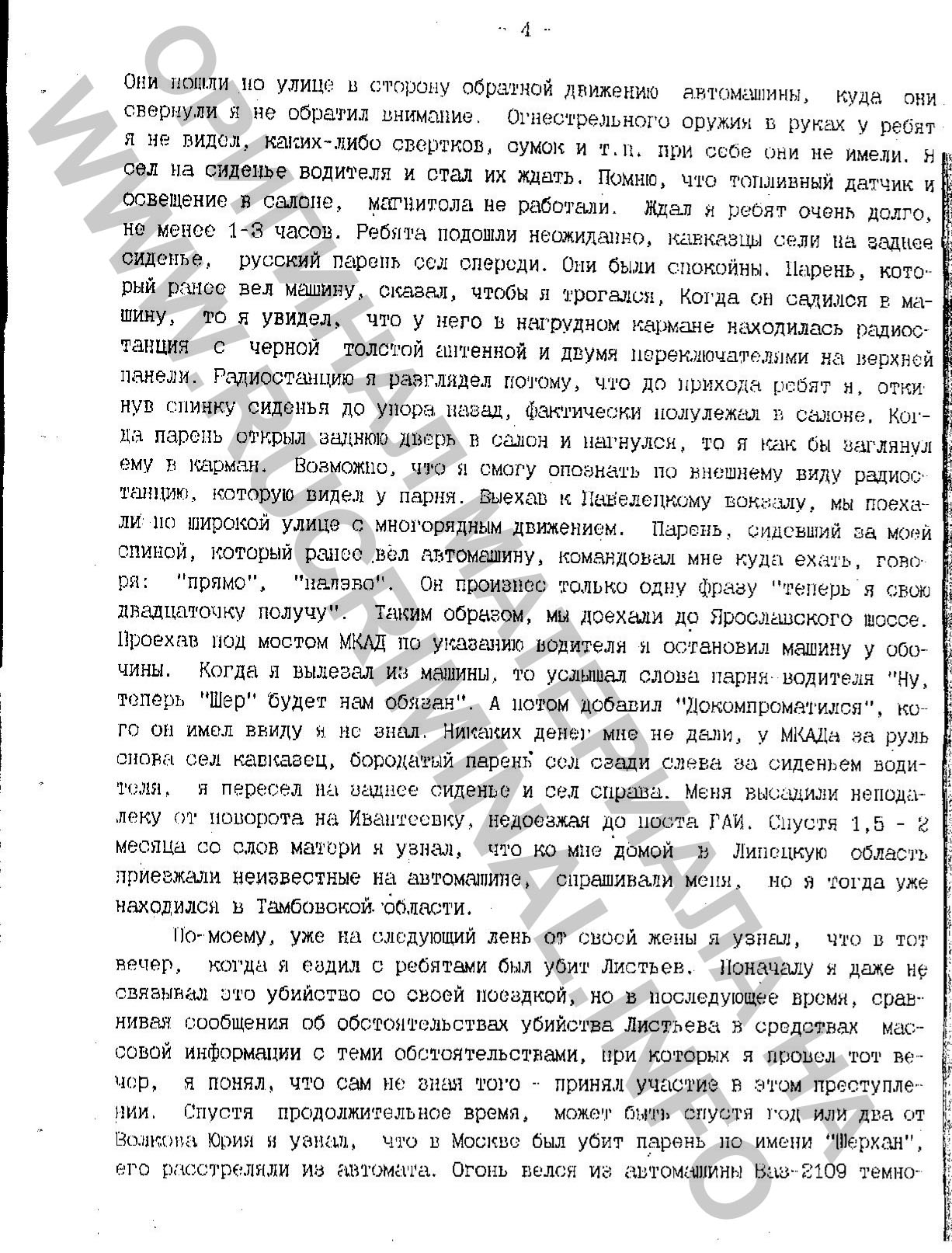