How did the organizer of the channel for money laundering of officials start? We continue to talk about the channel through which Russian officials withdrew more than $ 1 billion from the Russian Federation to the United States. Recall that the son of the former Prosecutor General of Russia Artem Chaika was registered in Switzerland at the address of a businessman of Ukrainian origin Bogdan Lisurenko. In Navalny's investigation, Bogdan Lisurenko's mother, Lilia, was mentioned literally in passing. Lilia Lisurenko and a certain Elena Shubina are founders of the Swiss company Favor SA. According to the information available to Rucriminal.info, many Russian and CIS officials and businessmen regularly used the services of this company. The package of services also included assistance in the withdrawal from the Russian Federation and legalization, both in the Swiss Confederation and in the United States, of money of dubious origin. Who is behind this channel? Shubina has a husband, Vadim Kebets. He worked in managerial positions in various Russian banks, including KB Rosestbank. In the USA, Vadim Kebets is the director of Concept Brokerage Holding Corporation. This company, in turn, owns a controlling stake in Western International Securities Inc, which manages assets worth about USD 1 billion.

On the eve of the bankruptcy, most of the more or less liquid assets were withdrawn from RosEstBank.

According to the bankruptcy commissioner of Rosestbank Alexander Morozov, the bankruptcy management got only 8-10% of liquid assets: part of real estate, securities, some property.

Morozov also found out that on the balance sheet of RosEstBank were bills of Western companies Rosest Invest S.A., Rosest Finance Ltd, Rosest Real Estate Ltd, Saddleway Holding in the amount of more than half a billion rubles. Moreover, 102 million rubles of these investments could be immediately written off at a loss, since the Western firms that issued promissory notes for this amount turned out to be non-existent. It is worth noting that the story with RosEstBank cast a serious shadow on the world-famous auditing firm Price Waterhouse, which worked with the bank not only as an auditor and client, but also as a partner in various projects of the World Bank. For incomprehensible (or understandable) reasons, Price Waterhouse did not manage to foresee the death of RosEstBank.

Meanwhile, the transactions made by RosEstBank under the leadership of Vadim Kebits were very amusing.

The bank invested its money in such "well-known and reliable foreign companies," such as Rosest Finance and Rosest Invest. These firms, in turn, bought up firms in England and Switzerland - for example, the financial company Lim. The acquisition of Lim, through which it was planned to enter the English market, failed and cost the bank a loss of US $ 4 million.

In the summer of 2000, representatives of one of the largest creditors of RosEstBank, a consortium of German banks, sent an official memorandum to the bankruptcy administrator of the bank, Alexander Morozov, in which it was reported that, according to the information available to the consortium, already in 1999 in Europe, transactions were carried out that made it possible to withdraw a significant part of the above to subsidiaries of RosEstBank funds for firms directly controlled by Vadim Kebets, who by that time already had a residence permit in Switzerland. The letter indicated the facts of transactions between RosEstBank's subsidiaries, the trading company Cresta Trading LTD, the Turkish company Bilka, the Turkish bank Birlesik Yartim Bankasi, related, in particular, to the supply of oil and metal to Turkey. In the course of their implementation, various structures had debts to the subsidiaries of RosEstBank. The latter, according to the authors of the letter, did not receive their debts. Instead, the money ended up in the accounts of firms controlled by Vadim Kebets.

In addition, German bankers stated that representatives of RosEstBank deliberately misled creditors and the bankruptcy administrator, assuring, for example, that investments made by subsidiaries of the Togliatti bank in the capital of other Western enterprises, in particular the Turkish company Turkcell, had depreciated to a minimum.

According to the authors of the letter, at least $ 9 million in various transactions passed the bankruptcy estate of RosEstBank. In addition, the bank's debtors had at that time various real estate in different countries of the world, which could also enter the bankruptcy estate.

After that, Western bankers expressed their readiness to purchase all bills on the balance sheet of the bankrupt bank. The authors of the letter supported their actions with work in Switzerland and Germany, where they tried to legally find justice for the elusive Mr. Kebets.

Later, according to unofficial information, the question of declaring him on the wanted list and involving him in the Interpol case was also raised before the bankruptcy administrator of Rosestbank, who refused to solve it until the expressed position of all the bank's creditors appeared.

Vadim Kebets himself, together with the heads of the London and Geneva representative offices of RosEstBank, gave very confusing explanations about why all foreign companies where RosEstBank invested significant funds turned out to be bankrupt. The only thing the former vice president pointed out was that some of the transactions, in particular the supply of oil and metal to Turkey, were carried out in the interests of Novafininvest and SNP Nova JSC.

However, an additional audit confirmed that all these economic entities were either already liquidated or were in the process of liquidation, and their promissory notes were unsecured securities.

Irreversible changes have occurred with the banks "Baltiya" and Birlesik Yartim Bankasi, which were owed to the "daughters" of Rosestbank. All of them were also liquidated, and investments in the capital of Bilka and Lim companies were impaired. The company "Rosest Finance", according to the findings of auditors, lost 5.6 million dollars, Saddleway Holding - 1.5 million dollars, Rosest Invest S.A. - 11 million US dollars.

However, for some reason, the bankruptcy commissioner did not consider it necessary to conduct an additional investigation in relation to the shareholders of the Togliatti bank, their operations, real estate and accounts abroad, and first of all in relation to the newly-minted “Swiss”, former vice-president for foreign economic activity Vadim Kebets. All these funds withdrawn from the borders of Russia were simply “forgotten”.

In December 1999, the arbitration court recognized the bankruptcy proceedings against RosEstBank completed, and in March 2000 the bank was officially declared bankrupt.

The Tax Service and the Central Bank of Russia, despite the fact that the claims of creditors of the fourth priority (payments to the budget and off-budget funds) were satisfied only in the amount of 41%, and creditors of the fifth priority received even less - 22.3% unexpectedly easily agreed to liquidate the bank. 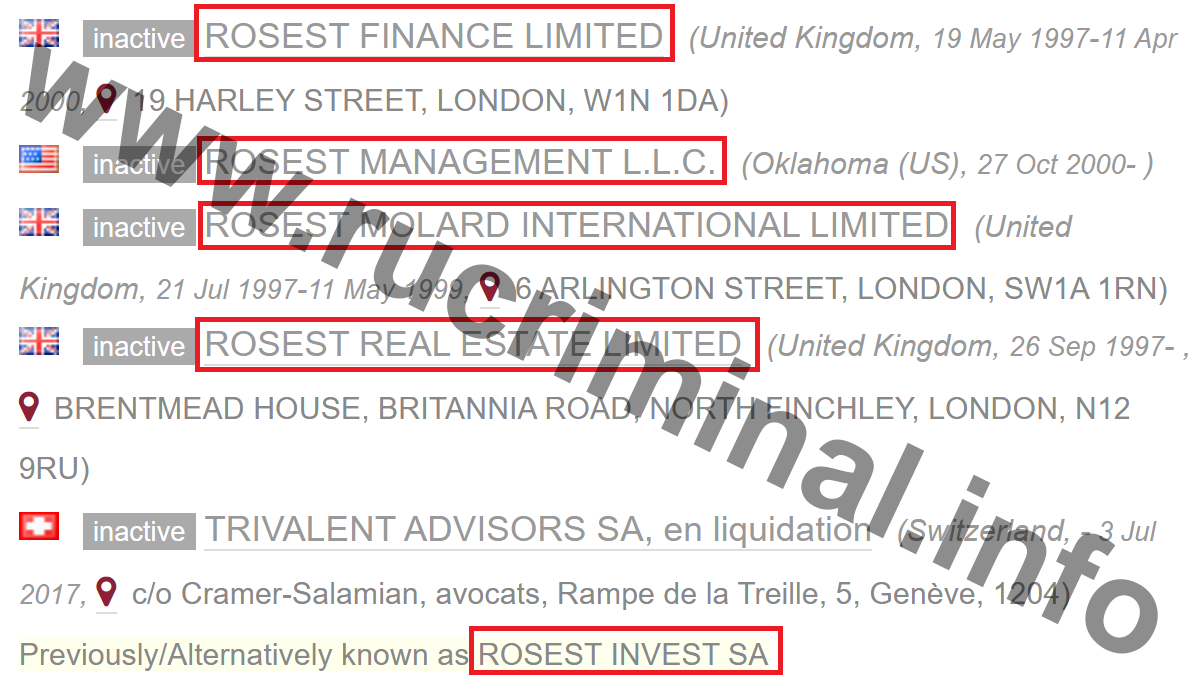