“I carried out all financial schemes in the interests of A. Chubais and members of his family”

He will find the adjutant of the former head of RUSNANO, who laundered money for him 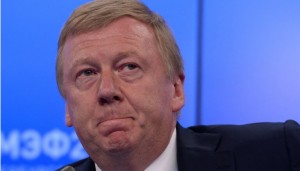 Law enforcement officers are checking the former head of Rosnano Anatoly Chubais and his entourage for corruption, TASS reports.

"Various units of Russia's law enforcement agencies, as part of checking the information received about the commission of corruption-related actions by the former head of Rosnano, Chubais and his entourage, are interviewing possible witnesses and examining the documentation received before the check for signs of a crime," the agency's interlocutor said. At the same time, law enforcement agencies are checking information about the accounts of the former head of Rosnano, Anatoly Chubais, hidden in European banks,

Rucriminal.info has repeatedly told about the dark deeds of Anatoly Chubais. We continue our investigation.

Recall that the Swiss Company SFO Concept AG JSC was established by Anatoly Chubais in 2010, who was its sole ultimate beneficiary, and subsequently its sole shareholder until May 2013, as well as SFO CONCEPT CONSULTING LLC, which was established in 2012 by the same Anatoly Chubais, but only on the territory of the Russian Federation as his Russian Family Office.

As indicated in previous publications, Anatoly Chubais did not choose Sergey Krychenko's candidacy for the position of head of the Russian Family Office by chance.

It was Sergei Krychenko who was the personal "adjutant" of Anatoly Chubais, in the full sense of the word, on all his personal issues, starting with planning his personal trips, organizing events for them, etc. before performing representative functions on behalf of Anatoly Chubais with his counterparties, business partners, acquaintances, relatives, etc.

It was Sergey Krychenko who was involved in opening / closing bank accounts, issuing bank cards of Anatoly Chubais in the Russian Federation, replenishing them and conducting all transactions on them on behalf of his boss. He also oversaw the construction as a Trustee under an agreement concluded in January 2013 by the Manager of the Swiss company SFO Concept AG JSC Andre Odermatt, on behalf of Anatoly Chubais for the construction of the Peredelki residential complex.

It is easy to guess that all the financial schemes that Sergey Krychenko directly oversaw were carried out by him exclusively in the interests of Anatoly Chubais and his family members. By their very nature, all these schemes were highly questionable in terms of compliance with current legislation.

The return on the above so-called loan was carried out in a very interesting way "according to Chubaisovsky", namely by increasing the quarterly remuneration paid by the Swiss Company JSC "SFO Concept AG", owned at that time by Anatoly Chubais Trustee, the family office of the same Anatoly Chubais in Russia - SFO CONCEPT CONSULTING LLC, under the Trust Management Agreement dated January 2013.

Rucriminal.info has every reason to believe that this loan was necessary only for the formal legal justification by Anatoly Chubais, with the help of Sergey Krychenko, of another "muddy scheme" for running funds through his Companies, in order to increase the declared part of his profitability that he (Anatoly Chubais) lacks and profitability of his Moscow family office.

Let us repeat that this whole "muddy financial scheme" in our opinion was carried out by Anatoly Chubais with the involvement of Sergey Krychenko solely to create the missing, imaginary declared part of the profitability of Anatoly Chubais as an individual.

Based on the results of the exposure of the above, another "muddy scheme" of Anatoly Chubais, we cannot but believe are urged to publish under the title “Giant Chubais’ Egg Pot Found” dated April 25, 2022, which details, as it should be assumed, a “raider seizure” took place at the negligible cost of the Peredelki Residential Complex, after Ilya Suchkov’s refusal in 2016 to accept participation in the illegal scheme of Anatoly Chubais, Boris and Dmitry Mintsev in the legalization of funds through the Swiss Company JSC "SFO Concept AG" with subsequent bringing it to deliberate bankruptcy.

Recall that the Cypriot company KRIZNA HOLDINGS LTD, affiliated with Boris Mints, in the same 2016, on far-fetched grounds, terminated the contract for the assignment of rights of claim with the company DENIAN LTD (British Virgin Islands) also affiliated with Boris Mints, launched a procedure for collecting a loan from a Swiss company JSC "SFO Concept AG", but only, as we wrote earlier, not in the London International Arbitration Court, where disputes were to be considered according to the loan agreement, but in the Arbitration Court of the Bryansk Region, due to, as we believe, its compliancy.

The artificial change of jurisdiction became possible due to the fact that the second defendant before the Cypriot company KRIZNA HOLDINGS LTD according to the surety agreement of June 2015, miraculously, in violation of the current legislation, without the knowledge of the debtor - the Swiss company turned out to be the Russian family office of Anatoly Chubais - SFO LLC CONCEPT CONSULTING", with an authorized capital of 100,000 rubles.

In this regard, a number of questions arise, including, which we hope will be answered:

1.- Why did the Arbitration Court of the Bryansk Region issue, in our opinion, an illegal decision to recover from the debtor and his so-called guarantor the amount of debt in the amount of 7,929,375 US dollars, according to unverified data?

2.- Why, at the court session, it was not checked and established what assets the guarantor, the family office of Anatoly Chubais, had, with an authorized capital of 100,000 rubles, he could answer jointly and severally, on an equal footing with the debtor Swiss Company SFO Concept AG JSC to the creditor Cypriot company KRIZNA HOLDINGS LTD on an artificially created debt of almost 8,000,000 US dollars?

In our opinion, the only correct answer suggests itself, which is that since we are talking about another artificially created, very dubious scheme from a legal point of view, by none other than Anatoly Chubais, then neither law enforcement agencies should ask such questions to "the celestial being himself" Anatoly Chubais , let alone the Arbitration Court of the Bryansk region could not.

As we have repeatedly written, in our opinion, it is precisely for the above reason as part of the illegal criminal prosecution of entrepreneur Ilya Suchkov, after the return of the criminal case by the Odintsovo City Court of the Moscow Region to the prosecutor for additional investigation in 2020.

On December 09, 2020, solely at the initiative of the senior investigator of the Investigative Department of the Ministry of Internal Affairs of Russia for the Odintsovo urban district - Egorova Zh.A., in order to justify her illegal actions, it is worth assuming that not without mercenary motives, without a statement from the victim, liquidated in November 2018, The Cypriot company KRIZNA HOLDINGS LTD initiated another criminal case against Ilya Suchkov, on the fact of alleged fraud on an especially large scale.

To her Egorova Zh.A. as mentioned earlier, obviously at the request of Anatoly Chubais, transmitted through Sergei Krychenko, through another "muddy scheme" material evidence was sold - the Peredelki Residential Complex to the same Anatoly Chubais.

The interests of the so-called victim, in the initiated, illegal criminal case No. 120011460225000182, liquidated in November 2018 of the Cypriot company KRIZNA HOLDINGS LTD, as part of the procedural succession from the company 01 TRUST SERVICES LIMITED (TILSOKA LIMITED), was represented by another trustee, but this time not only Anatoly Chubais, but also Boris Mints - Mosin Dmitry Valerievich.

It should be noted that at the time of writing I am Dmitry Mosin in October 2020 of a false statement against Ilya Suchkov, Dmitry Mosin knew for certain that the damage on December 24, 2018 to the Cyprus company KRIZNA HOLDINGS LTD by the Swiss Company SFO Concept AG JSC was fully repaid, and from him (Dmitry Mosin) did not have the authority, according to the power of attorney he had at that time, within the framework of the procedural succession of a power of attorney from the company 01 TRUST SERVICES LIMITED (TILSOKA LIMITED) to write such a statement, followed by submission of the Cypriot company KRIZNA HOLDINGS LTD, liquidated in November 2018, to law enforcement bodies on illegally initiated criminal case No. 120011460225000182.

Nevertheless, Dmitry Mosin, as we mentioned above, another confidant of Anatoly Chubais and Boris Mints, being aware of the falsity of his statement, asks in his statement of 2020 to consider the issue of alleged damage caused by Ilya Suchkov to the Cypriot company KRIZNA HOLDINGS, liquidated in November 2018 LTD. This circumstance in itself, taking into account the above circumstances, law enforcement agencies should have been regarded as at least a false denunciation by Dmitry Mosin in relation to Ilya Suchkov. Nevertheless, the senior investigator Egorova Zh.A. a different decision was made, necessary for her and Anatoly Chubais, to unlawfully initiate a criminal case in 2020 against Ilya Suchkov.

Once again, it is worth noting that in the Khamovnichesky District Court of Moscow, Judge Filchenko M.S., we believe that due to the feeling of complete impunity, the grossest violations by the above-mentioned judge of the rights of the defendants continue to gain momentum. Expressed this time in:

- not allowing the defendants and their defense lawyers to familiarize themselves with the judicial materials of criminal case No. 01-0104/2022 available at the Khamovnichesky District Court of Moscow;

- failure to provide the accused and their defenders with material evidence available in the case file;

- summoning to the court session, in the absence, according to the materials of the case, he has powers since February 2021, the so-called representative of the victim Dmitry Mosin.

According to numerous publications in the media regarding "muddy schemes", including the legalization and provision of the missing annual declared part of the profitability of Anatoly Chubais by Sergey Krychenko, the "raider seizure" of the Peredelki Residential Complex, the legalization of more than 20 000 000 US dollars, as well as other facts exhibited in publications, we hope that within the framework of the verification carried out by law enforcement agencies in relation to Anatoly Chubais and his "accomplices", the "muddy schemes" indicated in the media publications will not be ignored.