Vladimir Lavlentsev: a man who was able to steal from Lenenergo and go unpunished 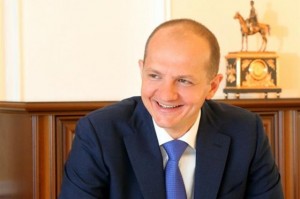 Fake guarantees for 5 billion rubles, non-existent equipment for 1.2 billion, "thrown" by PJSC "Lenenergo". This is just one example of the success story of Vladimir Alexandrovich Lavlentsev

Lenenergo was robbed. The tools are commonplace. The amounts are outrageous. The thief is known. However, the thief is not afraid of the prison. Why? We will tell and show you the details.

In 2017, between PJSC Lenenergo and LLC GorKapStroy, 6 contracts were concluded for the construction and reconstruction of power grid facilities that are very important for the Leningrad Region. These facilities included substations 220 kV "Kupchinskaya" and 110 kV "Shushary", as well as several buildings of the building of a single network control center.

However, as Kommersant wrote, Lenenergo will have to postpone the commissioning date for Kupchinskaya to 2020 from December 31, 2018, and the Shushary substation commissioning beyond 2020, although it was originally planned to launch it until October 31, 2019 ".

The reason for the missed deadlines in this case is not the usual lack of punctuality of the builders, but the crime. What makes this crime unusual is the identity of the swindler, or rather his status - the former vice-governor of St. Petersburg, Vladimir Lavlentsev.

The receipt of the contract with Lenenergo was furnished with great fanfare.

In addition to the respectable position of the owner of the new counterparty enterprise, Lenenergo received at the end of November - the beginning of December 2017 8 bank guarantees on behalf of Sberbank of Russia PJSC in the amount of 4.941 billion rubles. All these guarantees turned out to be fake.

To the fakes, which could not have appeared otherwise than on the initiative of GorKapStroy, one can safely add the "acceptance" of non-existent equipment from GorKapStroy by the then management of Lenenergo from GorKapStroy to the amount of 1.244 billion rubles.

Together with the most important energy facilities that were not built on time, this forms a complete fraud, and probably not only it. And all this is happening not in Dagestan, but in the heart of Russia - in St. Petersburg and the Leningrad region.

PJSC "Lenenergo", faced with such large-scale forgeries of documents and failure to meet the deadlines for important construction projects, began to take emergency measures.

There was an appeal to the law enforcement agencies about forging documents worth billions of rubles, which ... did not give any result.

There was a meeting of the Lenenergo Board of Directors, which made a decision that it was necessary either to terminate the contracts with GorKapStroy LLC, or to fine it and demand the fulfillment of obligations, as well as the provision of genuine bank guarantees. The power engineers hoped that such a respected person as the former vice-governor of St. Petersburg would nevertheless fulfill his obligations, and not just steal Lenenergo's money.

By December 25, 2018, when the term of the “most recent ultimatum” expired, and the power engineers did not receive genuine guarantees in exchange for fake ones, the board of directors of PJSC Lenenergo unanimously decided to terminate the contracts with LLC GorKapStroy. It was also decided to demand a refund of advances from this counterparty and collect fines.

LLC "GorKapStroy" ignored the pre-trial claims, and then PJSC "Lenenergo" applied to the courts. By that time, it was already March 2019.

Suddenly the powerful, and most importantly, useful for the country and the people, PJSC Lenenergo discovered that the courts sided with LLC GorKapStroy and Vladimir Lavlentsev, despite clear signs of fraud on the part of GorKapStroy.

In the course of the consideration of the case, GorKapStroy LLC, with a creak, returned 1.5 billion rubles to the power engineers, but then miracles began.

An examination arose in the case, which ignored the real development of events: for example, it took into account the unilateral acts of GorKapStroy LLC, as if they were bilateral, as it should be by law. Or, for example, she did not take into account the visually visible discrepancies with the forgeries provided by GorKapStroy LLC as “documents”.

And so on and so forth.

As a result, the facilities have not been built, Vladimir Lavlentsev has money, PJSC Lenenergo and ordinary people have problems, and the security officials are not interested in fake bank guarantees, without which GorKapStroy LLC could not get a contract from Lenenergo PJSC.

Who is Vladimir Lavlentsev, a swindler on trust of the highest rank? Why does he manage to get out of the water where an ordinary citizen would have already served a sentence for fraud? How was he able to provide 8 fake bank guarantees worth 5 billion rubles, sign documents for almost 1.5 billion non-existent equipment, and after that not go to jail?

The answer is written in the biographical note of Vladimir Lavlentsev.

In 2004, Vladimir Alexandrovich Lavlentsev began working in the Moscow government, was the first deputy head of the department for the city order of capital construction.

Then V.A. Lavlentsev worked in the department of architecture, construction, development and reconstruction of the Moscow government.

From November 2015 to November 2018, Vladimir Lavlentsev is the chief federal inspector for the city of Moscow of the office of the plenipotentiary representative of the President of the Russian Federation in the Central Federal District.

In general, Vladimir Alexandrovich Lavlentsev successfully “monetizes” the connections that he has grown in high government positions. Truth with work at Lavlentsev does not stick. But he is very good at throwing away the country's largest enterprises.

You can hold out for some time, having accumulated a serious financial cushion, and then we will see. The main thing in such a case is not to forget to share with high patrons and, probably, security officials. Then the president's arguments about the fight against corruption can be ignored by Lavlentsev: he has his own world, in which there are no security officials and no courts. Money can be borrowed in billions even from Lenenergo, but it is not necessary to build on them the objects stipulated by contracts and within the appropriate time frame.

However, in 2019, information appeared that Vladimir Lavlentsev could return to Smolny as vice-governor.

Probably, ensuring the "blindness" of law enforcement agencies, which do not want to initiate a criminal case in the presence of multibillion-dollar counterfeit bank guarantees, was not free, and Lavlentsov is now in dire need of finance.

This means that he needs new connections, which will bring new money from the next "thrown" structures. After all, the "kidok on an especially large scale" is the main model capable of bringing fabulous income to Vladimir Alexandrovich Lavlentsev.

It is not for him to be engaged in a real construction business, as to some kind of businessman, in fact!

Moreover, Vladimir Lavlentsev, in his personal qualities, is an outstanding swindler on trust. As the example of Lenenergo has shown, Lavlentsev is able to get into the trust of almost any leader, and then rob his organization. After that V.A. Lavlentsev leaves with the money, leaving overly gullible partners to independently deal with multibillion-dollar losses and disrupted projects.