Vendetta for the MP 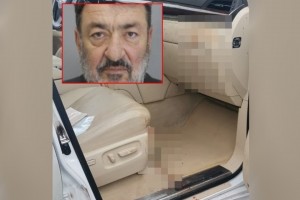 Before the imminent trial of the authority of Aslan Gagiyev (Dzhako) in Beslan, the defendant in the case, the deputy of the local City Duma Tamerlan Torchinov, was killed. He is called Gagiev's "closest contact" in the case file. Torchinov disappeared on March 22 in the afternoon after a walk at the hippodrome. Later, his Lexus was found with traces of blood in the cabin. And on March 23, Torchinov's body was found with traces of a violent death. According to the telegram channel VChK-OGPU, the case file of Aslan Gagiev's group says the following: “TORCHINOV TAMERLAN DAURBEKOVICH, nickname“ TAMIK ”, born 02.08.1956, registered at the address: Moscow, st. Fabritiusa, 38/1 square ... resides: Beslan, st. Br. Torchinovs, ... President of JSC Vladikavkaz International Airport. A.D. Torchinov's cousin - "Sches". One of Jaco's closest connections. " The murder of the deputy Tamerlan Torchinov is connected with the activities of the organized criminal group Aslan Gagiev (Dzhako). Tamerlane himself was friends with Dzhako, and his relative Alan Torchinov (Sches) was one of the gang leaders of the organized crime group. As stated in the materials of the case, in 2011 between Gagiev A.M. and Torchinov A.D. there were conflicts, relations between them deteriorated, and “Gagiev A.M. expressed direct threats of murder against A.D. Torchinov, in connection with which the latter really feared for his life and tried to stop all contacts with A.M. Gagiev. As a result, on June 12, 2013, Alan Torchinov was shot on the outskirts of Vladikavkaz. When the body of Alan Torchinov was brought to Beslan, where the funeral was to take place, a tinted "nine" drove up to his house. From there, fire was immediately opened on those gathered near the house. Four died - relatives of Alan Torchinov. There was also Tamerlane, who was slightly wounded. According to the testimony in the case materials, after these crimes, Tamerlane continued to communicate with Aslan Gagev, from the latter, messengers from Vienna repeatedly came to the deputy for money. It is not surprising that Alan's close relatives had questions to Tamerlane about his possible involvement in the 2013 shootings. They decided to ask these questions now: Tamerlane was kidnapped, after being tortured he was killed. Three relatives of Alan were detained on suspicion of a crime. A Rucriminal.info source said that it was Gagiev who made Torchinov the president of Vladikavkaz International Airport. And the airport itself belonged to Jaco. Torchinov transferred most of the income from the airport to Gagiev. During the interrogation, the lawyer Konstantin Skrypnik also spoke about this. He once flew to Vienna, when Jaco was arrested in Austria at the request of Russia, and met with Gagiev's wife Guzel Mustafakulova. Here is how he described their communication: “Upon arrival in Vienna, Guzel met me at the Grand Hotel. In the course of repeated conversations with me over the course of three days, both in the hotel and in other places in Vienna, Guzel demanded that upon returning to Moscow he convey to Roland Gagoev that he needed to collect funds from A. Gagiev's partners in Russia and give it to her , as well as Gagoev RD needs to influence the course of the investigation. The funds had to be collected from the following persons: Elbrus Komaev (the owner of the Salyut alcohol production plant); Tamerlan Daurbekovich Torchinov (co-owner of Gagiev at Vladikavkaz airport) ". As our interlocutor said, before being extradited to Russia, he Gagiev and Torchinov sold the airport for 700 million. The owners of the Minvodsky airport bought it.

And now Rucriminal.info publishes excerpts from the materials of the "Jaco case", which speaks of Alan Torchinov, whose death led to the murder of the deputy Tamerlan Torchinov.

“Torchinov A.D., being the leader of a gang that was structurally part of the criminal community, headed by A.M. Gagiev. and other persons, received from A.M. Gagiev. and other unidentified by the investigation of the founders of the criminal community, funds for the acquisition of weapons, ammunition, explosive devices, explosives, vehicles, communication equipment used in attacks on citizens, other grave and especially grave crimes, provided the members of the criminal organization with all of the above, and in addition paid material rewards to members of the criminal community for the successful implementation of the tasks assigned to them to carry out attacks on citizens. In addition, receiving from A.M. Gagiev instructions on the need to commit another attack, organized the direct commission of crimes, supervised the members of the gang subordinate to him, distributed criminal roles between them, planned upcoming attacks, as well as with the use of firearms and ammunition available to the gang, took a direct part in its attacks ".

“There were several groups in Beslan, North Ossetia-Alania: A.D. Torchinov's group. (Schesa), who was involved in the supply of the "Family" (the so-called OCG Jaco-Ed.) With weapons, ammunition, vehicles, solving various issues with the authorities, other issues up to helping families by teaching stnikov of the criminal community. The necessary arsenal of weapons and its stock was always available, there were Kalashnikov assault rifles of 7.62 mm and 5.45 mm caliber, sniper rifles, submachine guns "Scorpion", "Uzi", "K6-92", pistols PM, APS, Glock, TT, there were also devices for silent shooting, F-1 and RGD-5 grenades, there was a large stock of various ammunition of the required calibers, there was the necessary equipment, including face masks. For tracking and fixing, there were 3-4 video cameras and voice recorders available. In the Republic of North Ossetia, weapons were stored in the city of Beslan in a garage specially acquired for this purpose by A.D. Torchinov. Weapons for the groups that worked in Moscow were kept in the dachas in the Moscow region, in which they lived, and when SL Beglaryan was still in the "Family" - in the latter's garage. If necessary, everyone who had to "work" could choose the most acceptable weapon from the available arsenal, in the absence of the necessary weapons, it could be quickly ordered through A.D. Torchinov. To the group of A.D. Torchinov included Vataev F.O., Tautiev E.Kh., Daurov B.K., Abaev V.Z. The second group was headed by Dzarahokhov O.Kh. (Kolobok), it included O.E. Khamitsev. (Hitler), Sugarov Chermen ".

“In the summer or autumn of 2012, a participant led by A. Gagiev. criminal community Torchinov A.D. with his consent, he arranged a cache on the territory of his father's farm located in the town of Beslan, North Ossetia-Alania, in which he placed some kind of weapon. Being part of a criminal community under the leadership of A.M. Gagiev he took part in the murder of G.G. Slonov. and Ezeeva T.Kh. at the beginning of 2014 in the village of Summer Rest of the Moscow Region. In addition, according to R.A. Bagaev. and Zasseeva I.I. he became aware of the murder of V.I.Tuaev committed by members of the indicated criminal community. nicknamed "Zek" in the city of Beslan, as well as the attempted murder of a former member of the criminal community "killer", committed directly by RA Bagaev. and Zasseev I.AND. with the help of two small-sized submachine guns, which jammed, in connection with which it was not possible to commit the murder that time ”.

“Around the beginning of September 2009 in Moscow in one of the restaurants in which they were staying, he saw A.D. Torchinov, who had come to meet with A.M. Gagiev, after A.D. Torchinov had left. Gagiev A.M. said that now A.D. Torchinov “Senior” from him, that is, from AM Gagiev, on the territory of North Ossetia ”.

“The radio was given to him by A.D. Torchinov. To commit murders, they were supplied with weapons, which were originally acquired, shot and stored by A. Torchinov. A.D. Torchinov immediately told him that there was any weapon. At their disposal were Makarov pistols, Stechkin and TT automatic pistols, submachine guns of various modifications and manufacturers, Kalashnikov assault rifles of 7.62 mm and 5.45 mm calibers, sniper rifles, grenades, various ammunition in large quantities, silencers, that is, devices for silent shooting ".

Among the persons close to A.M. Gagiev was A.D. Torchinov since 2009, who repeatedly met with A.M. Gagiev. in Moscow, in Antalya, Turkey, carried out his various assignments. After 2011, in connection with what happened between Gagiev A.M. and Torchinov A.D. conflicts, relations between them deteriorated, and Gagiev A.M. expressed direct threats of murder against A.D. Torchinov, in connection with which the latter really feared for his life and tried to stop all contacts with A.M. Gagiev.

Expert conclusion No. 96 dated August 14, 2013, according to which the seized on June 12, 2013 during the inspection of the scene of the incident - the area at the entrance No. 3, located in the courtyard of the house No. 17 on

“Approximately two days after the murder of VV Dzhioev, that is, at the end of December 2011, at the first meeting with T.A. Kozyrev. he asked if they had committed the murder, he confirmed. Then a conversation took place between them, during which he informed T.A. Kozyrev. about a conversation with A.M. Gagiev and about his idea of ​​restoring justice and killing villains. He proposed to T.A. Kozyrev. decide whether he is ready to join them, that is, he offered to actually join the criminal community and its structural unit led by him, to which Kozyr T.A. ev agreed. As part of the criminal community, he took part in the commission of the following crimes: the murder of V.Kh. and Bagaeva V.M. in January 2011 in the village. Chermen North Ossetia-Alania, the murder of S.P. Khugaev in October 2011 in Vladikavkaz, the murder of V.V. in December 2011 in Vladikavkaz, the attempted murder of R.E.Bdaytsiev in August 2012 in Vladikavkaz, people were shot at the funeral of A.D. Torchinov. in June 2013 in Beslan, North Ossetia-Alania ".