In the case of the family of Mijas appeared specset 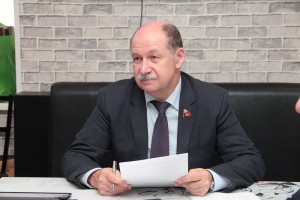 The criminal case against Alexandra Lisitsina – daughter of a reputable businessman from Solntsevo Sergei Mikhailov (Mihas)- may soon go for a raise. According to Rucriminal.info his plans to take back the TFR in the Moscow region. This is due to the fact that the materials appear special object. We are talking about the former head of the Naro-Fominsk region, and now the head of the Moscow regional Duma Committee Alexander Baranov. This is an old friend and business partner of Mikhail.

Sergei Mikhailov is well aware that this investigation is largely conducted against him. It refers to the theft of several plots of land in the Naro-Fominsk region, which were recorded on Alexander. But in reality they were owned by Mihas himself. He spares no effort and money to change the situation.  Alexandra is protected by a lawyer, a member of the human rights Council under Russian President Shota Gorgadze. To release the woman from detention under his personal guarantee ask the Hero of the Soviet Union, Hero of Russia, Deputy of the state Duma Arthur Chilingarov, Senator, leader of the Russian Union of veterans of Afghanistan Franz Klintsevich, a member of the Council on human rights under the President of the Russian Federation Andrey Babushkin.

However, all to no avail. So far, the situation is only getting worse. According to Rucriminal.info, in case materials it is said that investigative and quickly-search actions directed on check of legality of emergence of the property right to the parcels of land located in the territory of the Naro-Fominsky district of the Moscow region in number of 165 objects are now conducted. While that initially the investigation concerned only a few sites. Also pointed out that active work is underway to identify accomplices in the crimes. The latter, in fact, are not a big secret. According to our sources, the materials include the Deputy of the Moscow Duma from the faction "UNITED RUSSIA", Chairman of the Committee on state power and regional security Alexander Baranov. From 1991 to 1997 he was the head of the city administration of Aprelevka in Naro-Fominsk district, and from 2000 to 2014 he headed the entire district. In the Naro-Fominsk district are the possessions of Mikhail, he has long been friends with Baranov. And all sites passed to Lisitsyna with the participation of Baranov. By the way, after Baranov not voluntarily left the place of the head of the district, he took the post of adviser to the Governor of the Moscow region Andrei Vorobyov in the rank of Minister.

With Baranov was another scandal. After checking the military Prosecutor's office, he was demoted from Colonel to major. By the order of the Minister of defence Baranov was deprived of military ranks of the Colonel and the Lieutenant Colonel which as it became clear as a result of public Prosecutor's check, he received illegally. Notably, in the period of receipt Baranov titles then motoblanco Fuzhenko, former commander of the Kantemir division, personally, in an official letter asked Baranov to give Naro-FOMINSKOGO Commissar the municipal Cernicka apartment. Soon after he got it, and soldier Cernicka municipal apartment was provided ostensibly as a service.

From the materials of the case against Lisitsyn it follows that in the production of the SCH GU MVD of Russia in the Moscow region is a criminal case initiated on April 27, 2018 on the grounds of a crime under part 4 of article 159 of the criminal code (fraud on a large scale). "A case was opened on the facts of illegal acquisition of the right to another's property by deception - land plots located in the Naro-Fominsk district of the Moscow region and at the disposal of the Federal forestry Agency", - said in the materials that are available Rucriminal.info ahhh!

November 13, 2018 Lisitsyn was detained and then arrested by the Tver court. She was charged under article 159 of the criminal code. Since then she is in jail. Asking to extend the terms of detention, the investigators indicate that Lisitsyna has the opportunity and intention to hide, that being at liberty, she can destroy the evidence in the case, or otherwise prevent the establishment of the truth in the criminal case.