How budget billions spent on the dispersal of the clouds, which were not 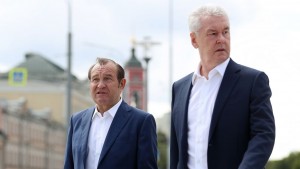 In 2016 the main reason that called for the introduction of amendments to article 1 of the Law "On holidays of city of Moscow," that this year the Moscow city Day coincides with the Day of solidarity in fight against terrorism, the twelve-year anniversary of the terrorist seizure of school in Beslan.  Called other reasons for the postponement of the Day of the city. For example, we decided to justify its transfer by dependence on weather conditions. According to the Minister of the government of Moscow Alexander Kibovsky, "the weather only Peter Pavlovich (Biryukov - Ed.) can tame." By this phrase meant that the Vice-mayor Pyotr Biryukov oversees the direction to disperse the clouds for the holidays. Rather, it oversees whom will the budget money for these events. As found out Rucriminal.info we are talking about very impressive amounts. On may 9, 2019, the air part of the victory parade on red square in Moscow was canceled due to adverse weather conditions. In 2017, the air part of the parade on may 9 was also canceled due to weather conditions. Last year, due to the weather, the air unit did not have a dress rehearsal, etc. At the same time, hundreds of millions of rubles of ANO "Agency of atmospheric technologies"are regularly paid for the provision of services for weather protection of Moscow during the festive events in Moscow on Peter Biryukov's go-ahead. According to Rucriminal.info in recent years, this structure has received 2.7 billion rubles from the budget.

At the same time, in fact, ANO is only an intermediary that rents equipment from other enterprises. However, one would not be surprised, because to create ANO had a direct bearing on Roshydromet and the Russian (then JSC) "chpo of V. I. Chapaeva"- "daughter" of Rostekh. Well, the state shifts budget money from one pocket to another. However, Rucriminal.info I found out that since September 28, 2018, all state structures have dropped out from among the co-founders of ANO, and its owners were two persons - a former employee of Roshydromet Viktor Korneev and his partner in various patents Andrey Chastukhin. However, it would be possible to "close your eyes", maybe people have developed and created something unique. However, the final doubt that we are dealing with another fact of corruption (and it is a word, name Biryukov become a unified whole), disappearing after reviewing the materials that was seen this summer in the Moscow Arbitration court. There is a state budgetary institution "Central aerological Observatory" tried to challenge the competition of the government of Moscow on the dispersal of clouds, proving that they are not allowed structure, even the state and with a unique technique, in the budget that invested a huge amount.  This is done by drawing up the conditions of competition for a very specific technique, which just uses ANO.

Here are excerpts from the court's decision: "As follows from the evidence presented in the case file, the Moscow city specialized Department for examination, repair and maintenance of road facilities" in the Unified information system on November 22, 2018, a notice was placed on an open tender for the right to conclude a state contract for the provision of services for weather protection of the city of Moscow during the festive events in 2019: may 1, victory Day, Russia Day and city Day (purchase No. 0173200001418001582). During the review of documentation by the applicant identified the following violations: - in the documentation the customer was absent requirements to the description of the bidder, and also lacked their shape, so the customer was not established requirements for the contents, including the description of the proposal of a contest participant that did not allow the applicant to complete the application. In addition, according to the applicant, the customer established mutually exclusive technical requirements for the aircraft (aircraft). The applicant also pointed out that the documentation does not contain requirements for the description of the proposal of the participant, as well as their form, thus, the customer does not set requirements for the content, including the description of the proposal of the participant of the open competition, which violates paragraph 4 of part 1 of article 50 of the Federal law of 05.04.2013 №44-FZ and did not allow fgbu "CAO" to properly fill out an application for participation in the open competition, and, accordingly, to submit it".

Further, as follows from the court decision, which publishes Rucriminal.info, "the presentation of unreasonable requirements for services by the customer entails the creation of preferential conditions for other participants of the open competition. The specified circumstances were the basis for the appeal of the applicant to arbitration court with this statement... In The specification the customer establishes requirements (existence in the plane of the ramp opening during flight for dumping of bulk reagents) which existence limits the number of participants of purchase, contradicts the requirements stated in the following non-normative acts...".

Moreover, according to the fgbi, the technique used by the eternal winner of "competitions from Biryukov" is so outdated that the payment for the services of ANO is throwing money "to the wind." The Agency is simply not able to cope with the bad weather. As confirmed by the spring scandal - the money paid for the dispersal of clouds on may 9, were "thrown to the wind." However, Pyotr Biryukov is satisfied. The court dismissed the claim, but with a very tricky wording: due to the fact that "the contract is executed in part, and therefore, the application of the consequences of the invalidity of the transaction is impossible."