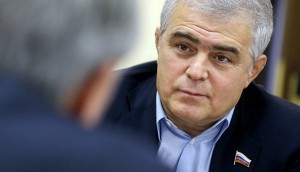 As it became known to Rucriminal.info, the Nikulinsky Court of Moscow sentenced Abdulgamid Hajiyev, the son of State Duma deputy Murad Hajiyev. He and four of his friends were found guilty under Part 2 of Art. 112 of the Criminal Code of the Russian Federation (intentional infliction of medium-gravity harm to health, committed by a group of people, out of hooligan motives). The offspring of the parliamentarian received two years and seven months of imprisonment - this is quite a bit considering what he had done. Hajiyev, together with his friends-majors, intimidated Muscovites, attacked them, arranged "showdowns". At the same time, the friends of the deputy's son already had convictions for such acts, previously they got off with suspended sentences. This time they were convicted of the attack on June 23, 2020. Young people in a Toyota Camry car, violating traffic rules, stopped at a pedestrian crossing near the roadway of Vernadsky Prospekt in Moscow. One of them unreasonably provoked a verbal conflict with a pedestrian crossing the road. Then all five, including Hajiyev, got out of the car and beat him. Sources of Telegram-Canada VChK-OGPU said that a very, very long train of criminal stories, including the use of weapons, stretches behind Abdulgamid Hajiyev. And not only for Abdulgamid, but also for his older brother Murtuz. It's just that in most of these stories, the father managed to solve their problems with the law. As it was on the night of July 24-25, 2020 in Derbent. The emergency happened after a fight between MMA fighters A. Emelianenko and M. Ismailov. After watching the battle, several townspeople and young guys were returning home in a car. In the area of ​​intersection of Y. Gagarin and G. Hasanov streets, a foreign car blocked their way. At the request to clear the road, followed by a selective mate. Moreover, the auto drivers started a skirmish, and then a fight. As it turned out, the road was blocked by a car in which there were the youngest son of Murad Gadzhiev Abdulgamid, the grandson of another figure, director of the Derbent College of Finance and Law, Gaidarov N.A., who is friends with the Gadzhiev family, the youngest son of the former head of the city of Derbent district, Kurban Kurbanov ... Local youth were not afraid of the majors. Then they began to urgently call for help from among their friends and relatives. The first to arrive was the eldest son of Murad Hajiyev, Murtuz. After a short skirmish, a fight broke out again with the use of firearms. It was lucky that the combat pistol in the hands of one of the majors did not fire, the shooting was carried out from a traumatic weapon. The police arrived at the scene, but the retinue of the Hajiyev family and relatives of the Kurbanovs quietly hushed up the issue with promises to investigate and punish the guys who did not recognize the "authority" of the offspring of the Hajiyevs and Kurbanovs.

State Duma deputy Murad Hajiyev is considered the king of Derbent. Sources told how he got his start in business. In the difficult and gangster 90s, the city of Derbent became the arena of battles between the criminal, mafia, and tribal clans of Dagestan at the stage of formation. Probably, like the whole republic at that time. But a particularly tasty morsel was Derbent, which was the most multinational, the quietest and most calm. In 1993, the director of the cognac factory, Nikolai Ivanovich Chubov, was pressured, by raids, beating right in the office at the workplace, armed athletes came and demanded to give up the enterprise. Such attacks were repeated until the director of the plant gave up. The plant had to be handed over to the Hajiyev family.

From whom and in whose interests the athletes acted is clear. Before joining the plant as a director, Murad Hajiyev worked as a technologist at a small winery in the village of Khazar, Derbent region. Over time, Murad Hajiyev practically took over the entire city. Of course, not without the help of father Stanislav Gadzhiev.

In the official declaration of State Duma deputy Murad Hajiyev, you will not find his billion-dollar assets. Murad Stanislavovich does not hold the main financial assets in the Russian Federation, except, of course, necessary. He prefers offshore, Malta, where there are accounts of his relatives. And the property is hidden in many countries - the Bahamas, Malaysia, France, Great Britain. The first known company of Hajiyev Melita Europe Holdings Ltd, is located in Malta, in the city of Sliema, 64 St. Anne`SCourt, Flat 5 BisazzaStreet. 44.6% of JSC "Derbent Brandy Factory" belongs to this company, the beneficiary of the company is the sister of Murad Gadzhiev's wife - Sapiyat Kurshieva. 55.35% of JSC "Derbent Brandy Factory" belongs to the wife of Murad Gadzhiev - Ashura Magomedzagidovna Gadzhieva. Chairman of the Board of Directors of JSC "Derbent Brandy Factory" - Kurshiev Magomedzagid Kurshievich. Apparently, the father-in-law of Murad Hajiyev. The second company is the Cypriot Van Denel Ltd, the address is the city of Nicosia, Αγίας Ελένης, 2, STASSINOS BUILDING, Floor 6, 1060. Registered to Pavel Yagutilovich Mishiev - in the past the chief engineer of JSC "Derbent Brandy Factory", now the general director of the combinat.