“He received the bag from Sechin I.I.”

Why is Alexey Ulyukaev being “pulled out” of prison 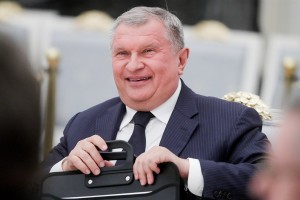 As it became known to the telegram channel of the Cheka-OGPU, a huge scandal is unfolding around the decision on the parole of the former Minister of Economic Development Alexei Ulyukaev. Until recently, both in the colony and in the prosecutor's office, they were against the release of a prisoner who had recently picked up a bunch of comments. However, then all departments suddenly changed their minds at once. And the judge, who practically does not satisfy the request for parole, suddenly decided to release Ulyukaev, despite all his problems with maintaining order in the colony.

As a source of the Cheka-OGPU said, shortly before filing a petition with the court for parole, which ended positively for Ulyukaev, he went to the administrative commission of IK-1, where he did not receive support from the colony. Moreover, by that time he had added two more violations and the administration of the institution recommended that he not apply. The application was withdrawn from consideration of the commission.

And then, unexpectedly, contrary to the recommendations of the colony, Ulyukaev's lawyers go to court with a petition. At this point, he has several active violations. After the court accepted the petition of the lawyers for consideration, the administration of the correctional colony, suddenly, unexpectedly holds an unscheduled administrative commission, at which it gives support to the convicted Ulyukaev (with existing violations !!!).

Further more. The prosecutor's office, which also did not support the release of Ulyukaev, suddenly completely changes its position. Judge Shcherbinina, who does not differ in particular love for the convicts (just look at her statistics on parole and the replacement of punishments), easily gives a start in life to an unrepentant corrupt official, to a malicious (but not recognized as such, questions to the head of IK-1 Lapin V. A .) to the violator of the TAP.

Surrounded by Alexei Ulyukaev, they assure that the sudden change in the position on his parole of various departments does not have corruption “roots” at all, but reasons of national importance. The Kremlin allegedly decided that Ulyukaev is now needed in Moscow, and not in the Tver colony. When the first serious sanctions were imposed on Russia in 2014, it was Ulyukaev who was the Minister of Economic Development and the main strategist in dealing with the economic crisis due to sanctions. As a result, by 2016 he managed to adapt the Russian economy to the sanctions. Now, after a new wave of the most severe sanctions, a consultant was needed who really understands this issue and has experience in mitigating the consequences of sanctions. However, the sources of the Cheka-OGPU doubt the reality of this version.

Rucriminal.info continues to publish the materials of the case against Alexei Ulyukaev.

“- testimonies of the inspector of the Directorate “K” of the Economic Security Service of the FSB of Russia ********* A.P. as a witness at the hearing and at the preliminary investigation, that the operational experiment was carried out on the basis of a decision approved by the head of the department. The employee who conducted the operational experiment received money in accordance with the act, issued it, described and indicated the number of banknotes, their numbers, after which, in the presence of specialists, members of the public, the indicated funds were placed in a bag. The bag, its handles, keychain and key were treated with a special compound. Subsequently, the bag with cash was placed in a canvas bag, the keychain with the key in a paper envelope to prevent preliminary contact with them. Prior to the operational experiment, these things were stored in the unit. On the day of the operational experiment, they were handed over directly to Sechin I.I. in the building of PJSC NK Rosneft by an operational officer, in the presence of members of the public. Feoktistov O.V. filed an application for extortion of a bribe. and Sechin I.I. As an investigator, he personally examined the scene of the incident, including a dark-colored BMW car stopped in the courtyard of the administrative building of PJSC NK Rosneft under the control of driver Makarov and with passenger Ulyukaev A.V. During the inspection of the scene Ulyukaev A.The. explained that he had arrived on the territory of PJSC NK Rosneft for a business meeting with Sechin I.I. At the same time, Ulyukaev A.V. and his driver ********* reported that there were no weapons of crime in the car. An inspection of the car was carried out, during which a brown bag closed with a padlock was found on the left side in the back of the trunk. About belonging of this bag Ulyukaev A.V. and his driver *********. couldn't explain anything. After that, Ulyukaev, at his suggestion, voluntarily removed from the right pocket of his trousers a key with a key fob, given to him by Sechin. When he opened the bag, he found in it cash in US dollars, when recalculated, it was found that the total amount was 2 million US dollars. Specialists conducted a study of the surfaces of the palms and fingers of both hands Ulyukaeva A.V. and ********* I.Yu., as a result of which traces glowing with green light were found on the surfaces of the palms and fingers of the latter. Keychain Specialist whether traces of luminescence are revealed. After a certain time, Ulyukaev A.V. made a remark to the protocol of the inspection of the scene that he received this bag from Sechin I.I., suggesting that there was some kind of gift in the form of good wine.

- testimonies of witness *********I.Yu., driver of the Minister of Economic Development Ulyukaev A.The., at the hearing and at the preliminary investigation that he drove Ulyukaev A.The. on a BMW 7 series car, he brought Ulyukaev A.V. to the territory of PJSC NK Rosneft, where he was met by Sechin I.I. He began to wait for him in the car, after a while he heard the sound of the car trunk lid opening from the outside, got out of the car and saw that Ulyukaev A.V. puts a brown leather briefcase with handles in the trunk. He began to help him to properly place it in the trunk. Having installed the briefcase, closed the trunk, turned, Ulyukaeva A.V. and Sechin I.I. was no longer around. The portfolio was heavy. After Ulyukaev A.V. came, got into the car and they drove off. At the gates of PJSC NK Rosneft were stopped by the FSB. After that, he took part in the inspection of the scene, during which the bag was examined, which Ulyukaev A.V. put in the trunk, using a key with a key fob, which Ulyukaev A.V. He took it out of his pocket and opened the bag. This bag contained cash. In his presence, the money was counted. 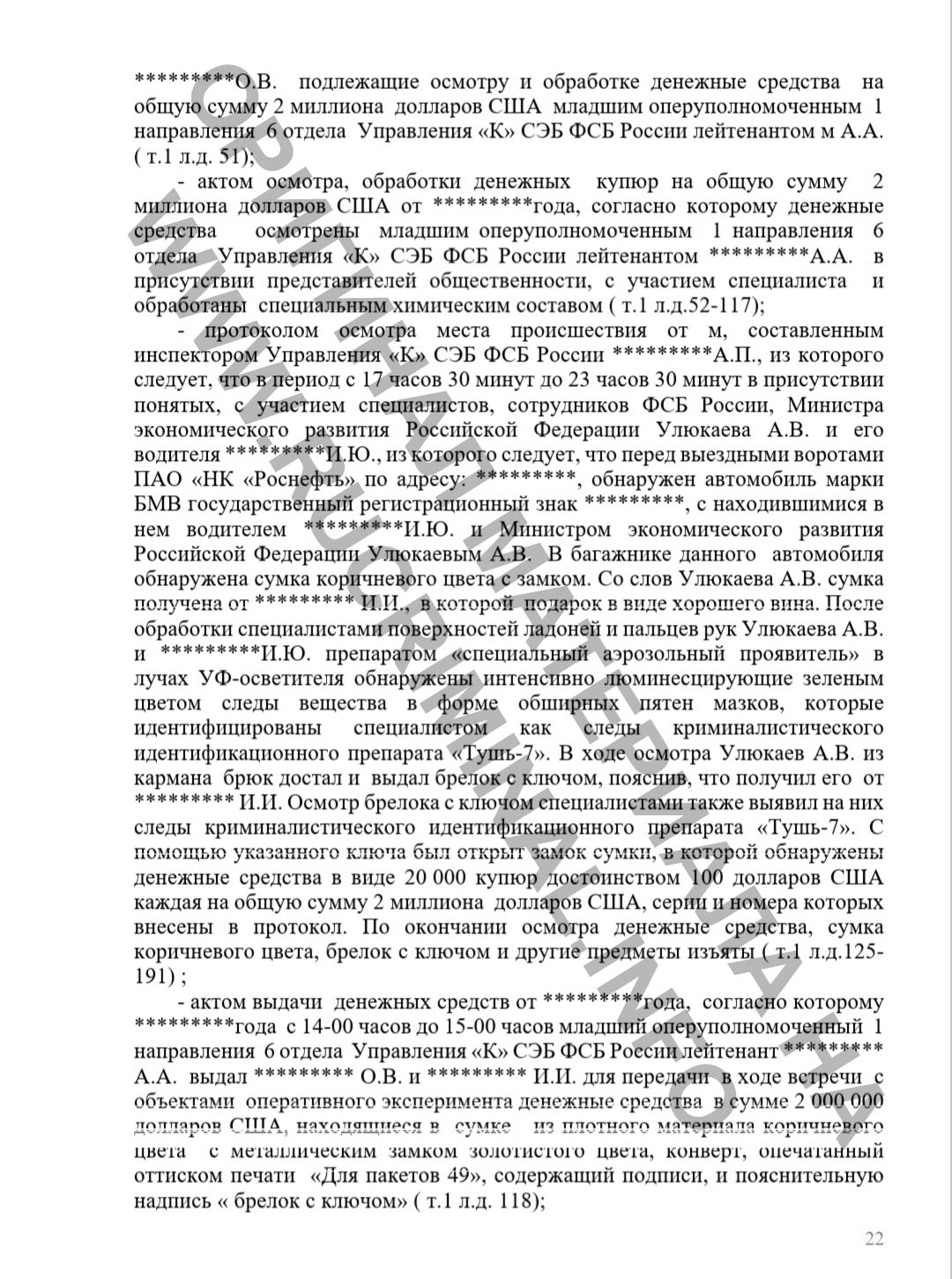