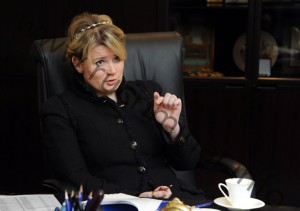 rucriminal.info returns to the topic of close environment

Deputy Mayor of Moscow Sergei Sobyanin Natalia Sergunina, responsible for the economy and management of urban property. She forbade posting any information about her personal life (including her date of birth) on the state councils, which raised suspicion that the official had something to hide. So it turned out. As it was found out by rucriminal.info, the civil husband of Sergunina and the father of her daughter is the native of Chechnya Movladi Natsayev, who in 2000, shortly before his acquaintance with Natalya, was brought to the base of the GU MVD of Russia in Moscow as a criminal contingent. As far as career growth Sergunina, significantly increased and the welfare of Movladi. Especially he likes to collect "expensive" "Mercedes". Nataev's two cars have the numbers K979RA197 and K939RA197. Three letters "KRA" are familiar to every Chechen. They are deciphered, like Ramzan Akhmatovich Kadyrov. And if an ordinary Chechen hangs a similar number on his Prior, he is in for a lot of trouble. Only selected people can use these numbers - those who are close to the head of Chechnya.

Therefore, it should not be surprising that Moscow's guests from Chechnya felt more comfortable in the capital. Suffice it to recall these permanent stories with shooting during weddings and other significant events for them.

In the fall of 2012, after another scandal with shooting, Sobyanin also decided to speak on this matter. The mayor of Moscow took under the personal situation around the shooting and promised "to severely suppress any such actions in the future." By the way, the shooting participant, after which Sobyanin made his statement, received 15 days of arrest.

And in April 2013, according to rucriminal.info, an event occurred, information about which was not included in the media. Which is not surprising. After all, his main party was the civil husband of the subordinate Sobyanin Natalia Sergunina (by the way, officially she is listed as an unmarried woman) Movladi Natsayev. He arranged shooting in Moscow: first from the balcony, and then at the entrance of the apartment building. It happened in the morning, when it was full of children and passers-by. And now guess what "severe" punishment the relative of the vice-mayor has incurred? Let's not torment our readers anymore-a fine of 3000 rubles. And then, because people called the police and "hush up" the story was impossible. Do you know what became the main mitigating circumstance in the sentencing?

"Dependence of a minor child born in 2003". It is about his joint with Sergunin's daughter. In order not to be unfounded, rucriminal.info publishes excerpts of the court's decision in relation to Natsayev.

The magistrate of the judicial section No. 348 of the Savyolovsky district of Moscow, Ivanov M.A. ....

Natsayev M.A. committed an administrative offense under Art. 20.13 of the Code of the Russian Federation on Administrative Offenses: shooting from weapons in areas not designated for this purpose.

So Natsaev MA, on May, 16th 2013г. approximately at 09 hours 50 minutes, being at the address: Moscow, ul. Novopeschanaya, d. **, apt. ****, carried out firing from his self-defense weapon in the settlement in the places not designated for it, namely: from the window of the indicated apartment.

Wines Natsaeva MA is also confirmed by the written materials of the case:

- Protocol CAO No. ******** on the administrative violation of May 16, 2013, from which it follows that Natsaev MA May 16, 2013 approximately at 09 hours 50 minutes, being at the address: Moscow, ul. Novopeschanaya, etc. **, Apt. **, carried out firing from his self-defense weapon in the village in not assigned places, namely: from the window of the indicated apartment;

- Report of the Inspector of the RPSP Company of the Ministry of Internal Affairs of the Russian Federation in the Sokol district of Moscow, Senior Lieutenant of Police, Safonov VV;

The court has no reason not to trust the submitted case materials ... When imposing a penalty in accordance with Art. 4.1.-4.3. The court takes into account the nature and circumstances of the commission of an administrative offense, the identity of the person responsible, who was not previously brought to administrative responsibility, fully acknowledged the guilt and sincerely repented of the committed, dependent dependent minor child of 2003 that the court recognizes in as circumstances that mitigate the punishment, there are no aggravating circumstances.

To recognize Natsaev MA guilty of an administrative offense under Art. 20.13 of the Code of the Russian Federation on Administrative Offenses, and appoint him a fine of 3000 (three thousand) rubles in the state's income. "

To make a normal and decent vice-mayor after such a story? The very next day I would put a statement on the dismissal. But, of course, this move is not for Natalia Sergunina. Especially, in conditions when she has so many obligations to other people from her environment. But rucriminal.info will tell about this another time.