Capital Arbitration: mother, leader of an organized criminal group and daughter of a thief in law

The robe is removed from the Moscow Themis 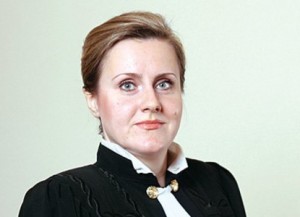 The Higher Qualification Collegium of Judges (VKKS) will consider the submission of the head of the ICR, Alexander Bastrykin, on the prosecution of Elena Kondrat, a judge of the Moscow Arbitration Court. She is suspected of mediation in an especially large bribe (part 4 of article 291.1 of the Criminal Code). The VChK-OGPU Telegram channel told the details of this story. The acquaintances of another judge of the Arbitration Court Elena Makhalkina had a need to resolve the issue in the FAS MO and she turned, one might say, to her mentor, judge Elena Kondrat. Makhalkina worked for a long time as an assistant to Judge Kondrat. The latter said that she had “the right person” and brought her to the fixer Ullubiy Medzhidov. However, that word "out of friendship" does not recognize and rolled a gigantic sum for such a service. While receiving the money, Majidov was detained. At first, Kondrat was a witness in the case, and now she has become a suspect.

According to Rucriminal.info sources, Kirill Evstigneev, a former assistant of the same court, worked in tandem with Ulubiy Medzhidov. Cyril once passed the exams for a judge, but did not pass, as he was deprived of his driving license for drunk driving.

Ullubiy Majidov and Kirill Evstigneev acted not alone, but together with their senior comrade Farid Zagirov. Officially, he works as an Arbitration Manager. Zagirov is a close friend and advisor to the Mayor of Makhachkala Salman Dadaev. A Rucriminbal.info source said that Majidov and Zagirov collaborated with Alfa Group on major financial issues in the Arbitration Courts of Moscow and the Moscow Region. They also tried for a long time to fall into the mercy of the Magomedov brothers (Summa groups), but after their arrest, both retired and denied contact with them. The arrested Ullubiy was replaced by his friend

Majidov and Evstigneev now have an office at 8 Presnenskaya embankment, building 1, floor 44, room 444. KDM Investment LLC This company is fictitiously engaged in wholesale sales of everything in a row, but in reality it is used to cash out funds. ... Zagirov and Majidov received money in cash for bribes, transferred some of them, kept some, and earned some of the money by selling "cash".

The headquarters of Medzhidov and Zagirov was the Azerbaijan restaurant; they also received customers and contractors at the Chaika and Lastochka restaurants in Moscow. Basically, the couple offered solutions to issues in different courts. In this regard, many servants of Themis, including a whole group of the court of the Moscow Arbitration Court, came into view. However, Majidov and Zagirov also proposed resolving issues with law enforcement officers from the Moscow region. To do this, Zagirov directly and through intermediaries turned to the Deputy Prosecutor of the Moscow Region, Semyon Yakubov, who had recently been removed from his post.

According to a Rucriminal.info source, Zagirov and Majidov have been lobbying for money issues in courts for more than 10 years. Zagirov is the main decider and Majidov is the average player. During the search, he was found to have about 50 mln rubles.

After the arrest, Majidov confessed immediately and began to cooperate with the investigation. And the judges of the Arbitration Court of Moscow and the Region froze in anticipation of whom he would tell. The information he possesses about judicial "candy" can seriously shake the chairs under many judges and court presidents.

Judge Elena Kondrat became the first "victim". But perhaps not the last. This story was superimposed on another. The son of Elena and the former Deputy Prosecutor General Ivan Kondrat, Nikolai, was charged with the preparation of contract killings of two people. The Cheka-OGPU was the first to report that Nikolai Kondrat was arrested for the murder of his driver and was in custody.

There was another interesting story with the judge, which can again be set in motion. At one time, the judge, through her friend, bought a lot of real estate and shopping centers in Bryansk, registered everything for her friend and her relatives. A friend was going to divorce her husband, and her husband asked for compensation. They sent him, he wrote a letter to the Qualification Collegium of Judges with all the invoices that Kondrat is the beneficiary of this property. As a result, I had to agree to the terms of her husband. He withdrew his complaint, and the VKKS terminated the proceedings. In February 2021, the judge commented on the telegram channel VChK-OGPU what was happening to her. "During the detention of U. Mezhidov, Kondrat E.N. was on sick leave with covid and post-ovid complications for about a month. She never communicated with U. Mezhdidov, did not meet and could not convey any of his contacts to anyone. I have provided evidence of this. at the disposal of the investigators.There is a reservation of Judge Kondrat E.N. and her son - a student in connection with the professional activities of the judge.All materials, Judge Kondrat E.N. is ready to submit to the Investigative Committee and Bortnikova A.V. her family, she considers the publication of information about the involvement of her son in the crime and the publication e of an unidentified criminal card, possibly the namesake of the judge's son. Judge Kondrat E.N. is ready to tell investigators the alleged customers who threw out false information. "

It should be noted that the Moscow Arbitration Court is an extremely interesting "poptikum". One of the examples of arbitration is Yulia Yuryevna Lakoba, the daughter of the once most influential thief in law Yuri Lakoba (Yura Sukhumsky). It was from him that the image of the "thief in law" Arthur was taken (performed by Valentin Gaft) in the film "Thieves in law". Yura Sukhumsky died when Yulia was 15 years old and her father's friends took custody of the girl. Mostly they were representatives of the mafia, but not only. For example, Iosif Kobzon was among them. It was through their efforts that Julia became a judge of the arbitration court.