Who is trying to hide materials about the mafia patrons from the power block? Subordinate heads of the TFR Alexander Bastrykin show some very strange shyness when a representative of the Prosecutor General's Office "pops up" in any criminal history. Does this happen with the approval of Bastrykin himself or is it an initiative? Karlen Azizbekyan, a former employee of one of the special forces of the Ministry of Defense, is trying to clarify this issue, but for almost ten years they have refused to sign him up for a personal appointment with Bastyrkin. And his complaints to the chairman are answered by those to whom he complains. The meaning of the story is extremely simple. The Main Investigative Directorate of the Investigative Committee of Russia in Moscow collected all the materials on thief in law Zakhar Kalashov (Shakro Molodoy) and a group of reputable businessmen about their creation of a criminal community and the seizure, together with a large group of security officials, of two largest casinos - Crystal and Golden Palace. However, Bystrykin's subordinates are openly afraid to initiate a case. Once they just "lost" all the collected materials. And when they were restored, they simply issue unreasonable waivers. And this is not surprising, given the list of assistants to the thief in law. He was assisted by a huge group of security officials, including Interior Ministry General Alexander Orlov and Dmitry Zakharchenko's teacher, Dmitry Zabednov. On the way to the cherished goal, the lawyer Dukhnov, representing the interests of Zurab Tsereteli, the co-owner of Kristall, was kidnapped and killed in Moscow. The main owner of the casino, US citizen Alex Crane, was kidnapped in Georgia and was never seen again. The operation was personally supervised by Shakro. And a criminal case was fabricated against another owner, Karlen Azizbekyan, which has already been recognized by the Main Investigative Directorate of the Investigative Committee of the Russian Federation in Moscow as a "custom" case. The case was then initiated by the investigator of the Prosecutor General's Office Atmonev. He also took the materials about the murder of Dukhnov and stopped the investigation under the pretext that the body had not been found, which means that there was no murder. After all this history, Atmoniev's affairs only went uphill. In recent years, he was an adviser to Prosecutor General Yuri Chaika, and even after Chaika left, he remained in office.

“The authorities of the criminal world (including Shakro Molodoy), together with a number of high-ranking officials of the Ministry of Internal Affairs of the Russian Federation and the State Prosecutor General of the Russian Federation (entered into a criminal conspiracy), on January 28, 2000, based on fabricated materials, initiated a criminal case, as a result of which a raider seizure of my companies was carried out, business and commercial real estate, - said in an appeal to Bastrykin

I became one to fight for my rights and interests so that I could not fight, the corrupt employees of the 18th Directorate for Investigation of Particularly Important Cases of the RF GP (represented by the investigator N.P. Atmoniev and the supervising prosecutor of the RF GP Lakhtin V.A.) became illegally me prosecute ...

In September 2013, I applied for the initiation of a criminal case against the persons who participated in my illegal criminal prosecution and the seizure of my property addressed to the head of the RF IC, A.I. Bastrykin. However, the employees of the RF IC did not take any action.

From August 2019 to the present day, investigators of the Investigative Committee in the Central Administrative District of the Investigative Committee of the Russian Federation in Moscow allegedly carried out checks on the selected materials from the criminal case, during which the investigators did not always act objectively and professionally, distorted the facts, grossly and criminally violated my rights and rights my partners, as well as our interests protected by law, unreasonably delayed the verification period, made unmotivated and illegal decisions, negligently treated their official duties. " Karlen Azizbekyan asks Bastrykin to personally examine the issue and make a decision to initiate a criminal case on the basis of the commission of Z.K. Kalashov (Shakro Molodoy), K.G. Manukyan, L. Lann., V. Kerin and other unidentified persons, including employees law enforcement bodies of CRIMES provided for by Art. 159,210,285,286,126,105,299,303,316 of the Criminal Code of the Russian Federation. At the disposal of Rucriminal.info were materials on Atmonev, excerpts from which we cite:

“By the resolution of the investigator for particularly important cases of the General Prosecutor's Office of the Russian Federation, Atmoneva N.P. criminal case No. 172423 was joined on 23.06.2000 in one proceeding with criminal case No. 191709. On the same day, by the decision of the said investigator, criminal case No. 191709 was terminated with regard to signs of abduction and murder of V.V.Dukhnova. in the absence of data on the event of these crimes, that is, on the basis provided for in cl. 1 hour 1 tbsp. 5 of the Code of Criminal Procedure of the RSFSR.

By the decisions of the Deputy Head of the Main Investigation Directorate of the Investigative Committee of the Russian Federation for the city of Moscow dated 05/27/2013 the above decisions of 06/23/2000 on the partial termination of the criminal case and on the joining of criminal cases No. 191709 and 172423 were canceled as illegal and unfounded.

At present, the preliminary investigation in criminal case No. 172423 has been suspended on the grounds provided for in cl. 1 part of the first art. 208 of the Criminal Procedure Code of the Russian Federation - in connection with the failure to identify the person subject to prosecution ”.

“According to the information received from the Department of Internal Affairs of the Internal Affairs Directorate for the Central Administrative District of the Main Directorate of the Ministry of Internal Affairs of Russia in Moscow, in the course of the operational - search measures to establish the whereabouts of V.V.Dukhnova. and Alex Crane in criminal case No. 191709, information was received that these persons were killed by persons who subsequently established control over the activities of the CRC “CRYSTAL”.

From this criminal case on 02.04.2015 in accordance with Art. 155 of the Code of Criminal Procedure of the Russian Federation, materials containing information about the commission of Z.K. Kalashov were separated into separate proceedings. , Manukyan K.G. , L. Lann, V. Crane, as well as other persons, including law enforcement officers, crimes under Part. 4 tbsp. 159 of the Criminal Code of the Russian Federation ". 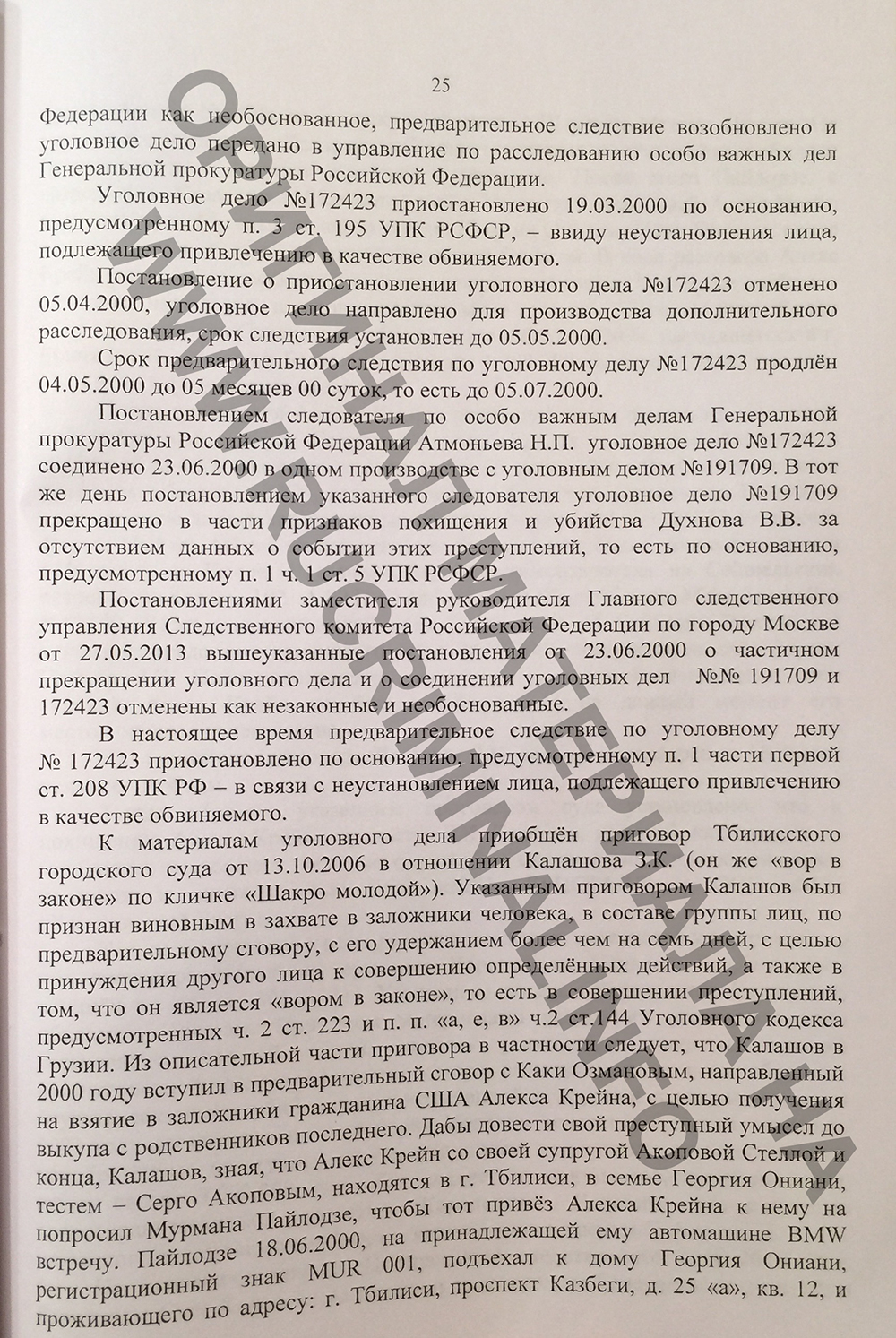