"Police officers took out knives and began to inflict injuries"

The Orekhovsk Brotherhood did not pass the test by the prison The number of victims of the "authority" Konstantin Piskarev (Kostya Bolshoi), who is charged with dozens of murders, could have been much less. Back in 1998, he almost fell victim to an attack himself. Then his men in the uniform of militiamen "detained" him in the street, put him in a car and allegedly drove him to the department. According to Putin, Piskarev felt that something was wrong and decided to run away. The "policemen" took out their knives and began to strike Kostya Bolshoi one by one. Only due to the fact that Piskarev was very physically developed, he managed to survive, fight back and jump out of the car. Piskarev linked this attack to a conflict with his acquaintance from the tax police. Another time he was arrested for the murder of four people as part of the Orekhovskaya organized crime group. Kostya Bolshoi spent a long time in prison, but categorically denied his guilt, and did not testify against his colleagues in the criminal shop. It was thanks to close ties with the Orekhovskys that Piskarev at one time managed to create a powerful organized criminal group. When he was arrested for numerous murders, he also began to deny his guilt (and does so to this day). But other members of the group are cooperating en masse with the investigation and giving testimony. When Piskarev reproached one of Zemtsov's former henchmen for this, he, in defense, recalled the bandit alma mater Kostya Bolshoi. “Why, the Orekhovskys, they still talk for each other, damn it,” Zemtsov replied.

“Being brought in as a defendant under Part 2 of Art. 209, p.p. "G", "h" h. 2 tbsp. 105, part 3 of Art. 222, part 3 of Art. 222.1 of the Criminal Code of the Russian Federation, Barabashkin pleaded guilty to participation in the gang and the murder of Stepanov. Barabashkin did not admit his participation in the illegal storage of weapons, ammunition, explosives and explosive devices. According to the testimony of Barabashkin, around 1993-1994, he met Alexander Zamyatin, who at that time was engaged in a business related to the development of a sand pit, and began to maintain friendly relations with him.

Around 1995-1996, Barabashkin met Zamyatin's acquaintances, Konstantin Piskarev, Fedoseev, nicknamed Mitya, the Bezrukov brothers, Sergei (nicknamed Commissar) and Andrey (nicknamed Decl), as well as Alexandrov nicknamed Nixon. At the same time, Barabashkin met a friend of Piskarev, Pirtskhalava Georgy, who was engaged in business: he was selling some cereals, his office was in the area of ​​the Paveletsky railway station. Subsequently, Zamyatin and Piskarev offered Barabashkin, as a side job, to periodically drive them up in a white VAZ 2108 personal car with the state registration plate "144". Barabashkin usually picked up Zamyatin from home, took him to various meetings, and then took him home. The work was irregular. Barabashkin worked with Piskarev much less often, took Piskarev from the Burevestnik yacht club, took him mostly to restaurants, waited for him in the car. Piskarev did not talk about his business. For a day of work, Piskaren and Zamyatin paid him $ 50 each, they also paid for the gasoline consumed. Piskarev Konstantin communicated with the crime boss from Sergiev Posad, Valery Drozdov, went to the bathhouse with him, periodically came to visit him. On the territory of the yacht club Barabashkin saw a weapon at Fedoseyev several times: the first time he saw in his hands a pistol with a silencer, which looked like a Makarov pistol, the second time he saw a pistol of Tokarev's "TT" design. Fedoseev kept his pistols on a shelf in a construction trailer where he lived in the Burevestnik yacht club. Fedoseev never spoke about the origin and purpose of the weapon. In late autumn or early winter 1996, Zamyatin asked Barabashkin to come to Burevestnik and said that there was some work to be done. When Barabashkin arrived, Zamyatin, Piskarev, Fedoseev, Sergey and Andrey Bezrukov were already there. Soon a foreign-made minibus arrived at the territory of the yacht club, from which two masked men got out. A man was dragged out of the car in handcuffs, with a black bag on his head. This man was handed over to Piskarev, who then strangled him and, together with Zamyatin, buried the corpse in the ground.

Around 1997-1998, in the summer, Barabashkin, at the request of Piskarev, took Andrey Bezrukov and Aleksandrov to the area of ​​the Chistie Prudi". A month later, Andrei Bezrukov told Barabashkin that he and Aleksandrov, on the instructions of Piskarev or Zamyatin, had burned a Mercedes-Benz car that was parked in the courtyard of the house where Pirtskhalava lived.

Around 1998, in winter, maybe late autumn, at the request of Andrey Bezrukov, Barabashkin drove with him to Fergana Street, where they stayed in the parking lot for about two hours. According to Andrey Bezrukov, Piskarev instructed to set the time when a red sports car will arrive at the parking lot. Perhaps Barabashkin still traveled at that time to observe this car. Approximately 1-2 months later, Fedoseyev told Barabashkin that they "overwhelmed" some man in the elevator, at the entrance of the house on the street. Fergana city of Moscow. Fedoseev, Alexandrov, Andrey Bezrukov were present.

In 1997-1998, Piskarev was detained by police officers in Moscow. During the trip, Piskarev, when he realized that he was being taken out of the city, tried to escape. The police officers took out knives and began to inflict multiple wounds on Piskarev. Piskarev managed to escape and he himself sought medical help at the First City Hospital. Piskarev connected this attack with a conflict with his acquaintance from the tax police, with whom he had a joint business - this acquaintance organized tax inspections, identified tax violations that threatened large fines, and Piskarev offered the management of the firms his mediation in resolving problems with inspections.

Since the summer of 1998, Barabashkin stopped communicating with Piskarev, Zamyatin, Bezrukov, Mitya and Pirtskhalava. The last time I spoke with them was at the funeral of Andrey Bezrukov in the summer of 1999 ”.

And here is a record of the negotiations between Piskarev and another accused Zemtsov: “Documenting the negotiations of Piskareva K.Yu. and Zemtsova D.A. in the process of their escort. During the examination, the verbatim content of the conversation between Piskarev and Zemtsov regarding the prosecution was reproduced and recorded. During the negotiations, Piskarev discussed with Zemtsov who gave what testimony in the criminal case, was interested in concluding a pre-trial agreement with Zemtsov, reproached the latter for giving testimony and arrested Zamyatin on the basis of his testimony. “In June he was arrested. And from your testimony he was arrested "," You even gave testimony against those whom, as I understand it, they did not even find "," If it is so itching, you know, you want to tell something about everything, you could get up and all this tell. It would be the same. " Piskarev also discussed the testimony of S.Yu. Bezrukov. about Maslov's murder: “What could he tell? Bezrukov himself did not see anything, he knows nothing. " In response, Zemtsov objected: "Yes, he knew that he was a cop." In general, Zemtsov's responses indicate that he has no intentions to slander Piskarev. As an explanation of his position, Zemtsov says: "Well, the Orekhovskys, they still talk for each other, damn it." 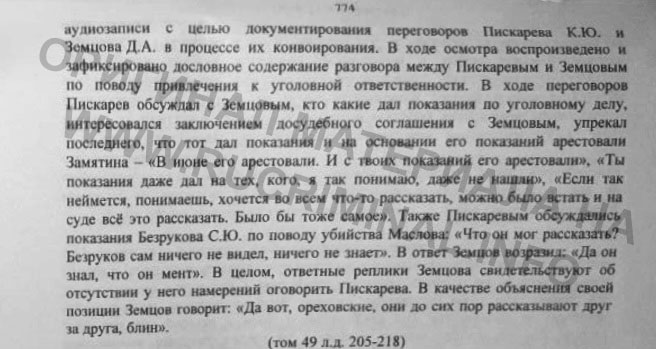