"Sobchak told the driver to go in the oncoming lane"

The TV star has a criminal relapse 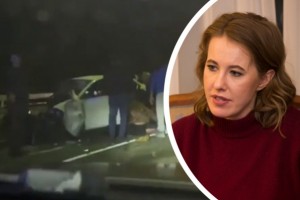 Sources of Rucriminal.info and the VChK-OGPU telegram channel in law enforcement agencies believe that during the investigation of a fatal road accident in Sochi, Ksenia Sobchak should be checked that her actions fall under two articles of the Criminal Code of the Russian Federation at once: 33 (declination of another person to commit a crime by persuasion, bribery, threat or other means) and 125 (leaving in danger). Recall that on October 9, Maybach was driving the socialite to the airport, drove into the oncoming lane and collided head-on with a Volkswagen. The woman in the car died (her 7-year-old daughter was left an orphan), the second passenger is in critical condition. The Volkswagen driver was also badly injured. The Rucriminal.info source reminds that Sobchak used to have cases when she forced drivers to violate traffic rules and go to the oncoming lane. For example, here is an excerpt from an article in one of the glossy magazines from 2007.

“Recently, late for a concert at the Olimpiyskiy, the famous blonde of all Russia Ksenia Sobchak ordered the driver to drive in the oncoming lane in order to overtake slowly moving cars. After some hesitation, he succumbed to the request of the star, as a result of which he was soon stopped by a traffic police inspector. During a forced stop, Sobchak jumped out of the car and, expressing invectives against the servant of the law, threatened him with problems with her superiors if he did not immediately release her. When she got to the sports complex, Ksenia immediately fired the intractable driver, who went to settle his own problems due to traffic violations. " Given such publications, it is certainly worth checking Sobchak if she forced the Maybach driver to violate the traffic rules, because she was in a hurry to the airport.

The driver has obviously already been "worked on" in this respect. He fully and unconditionally admitted guilt. But it looks like they worked not only with the driver. The Prosecutor's Office of the Krasnodar Territory on October 10 from 12.00 pm (the accident happened the night before) has already dotted all the I and constantly reports that the driver has admitted guilt, all the circumstances are clear, they say, and there is nothing to investigate. The Ministry of Internal Affairs of the Russian Federation went even further. The Internal Affairs Directorate for the Krasnodar Territory posted a press release about the accident and the initiated case, where at the end it was stated that "The suspect has been chosen a preventive measure in the form of a written undertaking not to leave the place." The press release was reprinted on its websites by the Central Asia Ministry of Internal Affairs of the Russian Federation, however, this phrase was simply thrown out. They decided not to disturb the public with the message that the driver who transported Sobchak, and who committed a fatal accident due to a gross violation of traffic rules, was left at large.

The way the prosecutor's office and the Ministry of Internal Affairs operate in the story of Sobchak suggests that the necessary mechanisms are in place. Ksenia Anatolyevna will not be involved. Doctors say that the victims after the accident had severe injuries, including an open skull fracture. Despite this, Sobchak left the victims to die and drove to the airport in a different car. she "really wanted to go home." Ksenia Sobchak was already at the airport exactly 37 minutes after the fatal accident with her car. Drivers of passing cars helped the dying, Ksenia Anatolyevna hurried to the plane to Moscow. And I had time ...

Sobchak left the dying people at the scene of the accident, did not even approach them. And there is a corresponding article of the Criminal Code (125) and it is used in such cases. The Cheka-OGPU cites an excerpt from an investigation of a similar story, like the Sobchak car accident. Ksenia Sobchak falls under the criminal law: she left dying people at the scene of an accident and disappeared. “In addition, the actions of the suspects were qualified by the investigation on the grounds of a crime under Article 125 of the Criminal Code of the Russian Federation. for life and health condition and were deprived of the opportunity to take measures for self-preservation due to their helplessness. It was established that the suspects had the opportunity to help the victims, but did not do it and fled from the scene of the accident."