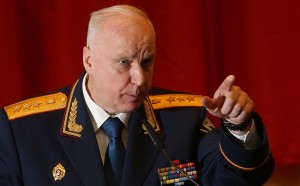 Bastrykin intends to disperse the Vsevolozhsk Directorate of the Investigative Committee after receiving disgruntled citizens. However, the current head of the Investigative Directorate of the Investigative Committee for the Vsevolozhsky District of the Leningrad Region, Aleksey Demchenko, has been in his position for only about a year, previously he worked in the Kingiseppsky District of the Leningrad Region, where he has established himself very well. He has inherited such a legacy from the previous leaders, with which he has not been able to cope for a year. As the telegram channel of the Cheka-OGPU notes, individual investigators of the thieves' department are not subordinate not only to Demchenko, but also to Bastrykin himself. Over the past two or three years, several leaders have already changed in the investigation department. So, according to the source, the previous boss with the surname Li, pleasant to the Russian ear, took an active part in various corruption schemes and left the ICR, as they say in a quiet way: without a criminal case, but nowhere.

After receiving visitors, Alexander Bastrykin noted the overall low performance of the investigative department in Vsevolozhsk, including the number of cases completed and sent to court. In the investigative department in Vsevolozhsk, an official check is underway, based on the results of which a number of managerial and personnel decisions will be made.

Since the Chairman of the Investigative Committee of the Russian Federation instructed the commission of the central office to check the activities of officials of SO in Vsevolozhsk over the past 5 years, I wonder if it will affect the leaders - Kutafina E.F., Babiak N.M., who actually formed the backbone of the department, which Alexander Ivanovich gave his categorically unsatisfactory assessment. A major corruption case was being investigated against all of them, which was simply hushed up. Details - in the material Rucriminal.info. Before the head of Lee, the SO for Vsevolozhsk was headed by Kutafina Ekaterina Fyodorovna, who hastily had to leave her leadership position in the summer of 2018, on the eve of the initiation of a criminal case on numerous malfeasances committed under her leadership in the SO.

So, on August 21, 2018, the Department of Internal Affairs of the Investigative Department of the Investigative Committee of the Russian Federation in the Leningrad Region initiated a criminal case under Part 1 of Art. 286 of the Criminal Code of the Russian Federation. The reason for the initiation of a criminal case was the decision to send the inspection materials to the preliminary investigation body for a decision on criminal prosecution dated May 21, 2018, issued by the Deputy Prosecutor of the Leningrad Region on the facts:

- concealment of illegal procedural decisions by officials of the CO in the city of Vsevolozhsk;

- falsification of the results of the investigation by removing procedural documents from the case;

- Substitution of procedural decisions to extend the duration of the investigation and to terminate the criminal case;

- concealment of a grave crime from registration (Article 111 of the Criminal Code of the Russian Federation).

Potential criminal suspects who were repeatedly questioned as witnesses were:

- Investigator of SO for the city of Vsevolozhsk Amaeva E.D.

- Deputy Head of SO for Vsevolozhsk Babiak N.M.

This ruling is at the disposal of Rucriminal.info. If you read the resolution on the termination of the criminal case, then all the above facts, which have found their objective confirmation in the framework of the investigation, for one reason or another, do not entail criminal prosecution of the senior officers of the SO.

If you read their testimony, then neither Kutafina E.F., nor Babiak N.M. - they were not responsible for anything, they cannot find out "their" signatures in the procedural documents, they do not remember the details of the events being investigated. Both from a professional and philistine point of view, the termination of the criminal case is inexplicable.

And why then we are surprised that the Vsevolzhsky department behaves this way. You look and investigator Vladislav Megrelov will go for a promotion.