"Tell a bunch of masked people"

How Kenes Rakishev and Zhanna Kim initiated the Rochdelskaya massacre At the disposal of Rucriminal.info were transcripts of court hearings and a criminal case against police officers, who were completely unreasonably accused of not interfering with the shootout at the Elements restaurant (owner Zhanna Kim). It clearly follows from these materials that Kim is disingenuous during interrogation when he says that extortion took place in the Elements. When she called the 02 service from the restaurant, she said that negotiations were under way to pay for the repairs. She also says that a legal aid agreement has been concluded with Budantsev. From the materials it can be seen that she saw the restaurant for the first time in her life and perceives it as “Kenes's man”. We are talking about a Kazakh businessman Kenes Rakishev, a friend of Kim and a sponsor of her projects, including the Elements restaurant. A Rucriminal.info source familiar with the situation said that Kim's position was due to the pressure exerted on her by the security forces and Kenes Rakishev. They had to provide the necessary evidence, stipulate the police, and also justify the use of military weapons and the shooting of two people by Eduard Budantsev. After all, he argued that if the police had not been idle, then he would not have had to shoot. the Kazakh businessman was not even questioned about the case. And, of course, Kenes Rakishev shielded himself, and he, as the person who sent Budantsev to “showdown” with Kim's opponents, is the culprit of the massacre. However, the Kazakh businessman was not even questioned about the case. Rucriminal.info will publish these materials in several parts. Let us remind you that the lawyer Eduard Budantsev and his fighters and the "authority" Andrey Kochuykov (Italian) with his fighters met in a fight at the restaurant "Elements". It was after the shootout that Andrei Kochuikov (the “right hand” of the thief in law Zakhar Kalashov) ended up in the pre-trial detention center, from where they tried to rescue him with a bribe to the ICR officers. As a result, the "authority" was not released, and the employees of the TFR and Kalashov ended up in the pre-trial detention center themselves. New materials received by the editorial office show that the culprit of this whole story is Zhanna Kim's close friend, the oligarch from Kazakhstan Kenes Rakishev. At first, Zhanna, clearly performing the task of Rakishev, provoked Kochuikov into a conflict. And then Rakishev sent the lawyer Budantsev with a military weapon to a tough "showdown" with authority. By and large, it was at the suggestion of Rakishev that this whole story began, which ended with the arrest of Kalashov and the ICR officers. I find it difficult to say whether she called me or I called her. You can see the details ”.

And here is an excerpt from the recording that Jeanne Kim herself made at the place of the "showdown". She, at the request of Rakishev, tried to hide this record and she got into the hands of the investigation actually by accident. It is clear from the recording that there was a normal business conversation about debt. Until Kim (F) spoke with Rakishev. After that, she began to lie that she was being threatened and that there were armed people in the restaurant.

F-For which I paid thirty thousand dollars. These lamps turned out.

G-It's not an electrician, it's already (equipment).

F-And our electrician has already reworked it several times. Because these are all lamps, they are intended for household lighting only. Not for commercial. That is, we have already four times, I don't know.

B-What is the difference, I just don't understand something? There commercial and household use:

W- There must be some other power, in these lamps themselves

W- Why should I do this if I paid for it? Please align, and I will pay you all your money that we will count Mine, yours, these, and let's bring it together correctly.

F-If you don't want to, I say, let's go to court. Please go to [sounds like furniture moving]

MX - Jeanne, but you yourself said that you owe her eight million 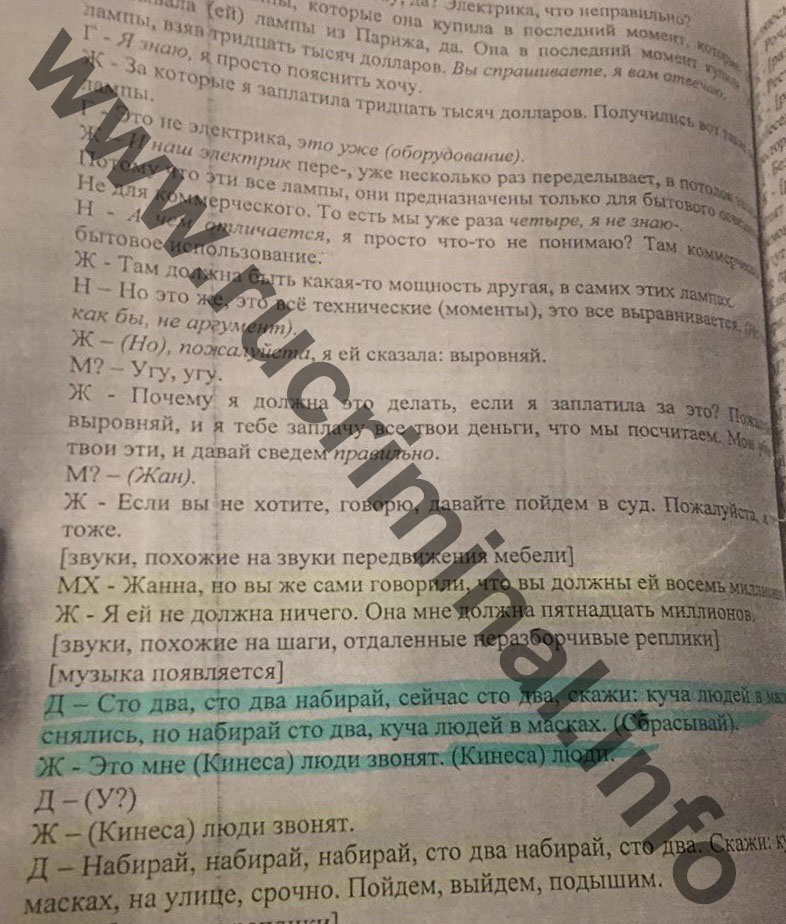