How the FSB put the ex-prosecutor general in place In continuation of the personnel news about the appointment of Igor Tkachev to the prosecutor's office, who will take the post of Deputy Prosecutor General of Russia for supervision of the investigation in the central offices of the Investigative Committee of Russia and the Ministry of Internal Affairs. Despite the crushing personnel reshuffle in the power unit, Yuri Chaika manages to maintain control over the Investigative Department (SD) of the Ministry of Internal Affairs of the Russian Federation, which has traditionally been the instrument of the Prosecutor's Office, as opposed to the Investigative Committee of Russia. So, in the Investigative Unit, the investigation of the criminal case initiated by him on the Berdyaush Oil Company against the former partner Artem Chaika is in full swing, due to obvious excesses in which, at one time, even Deputy Prosecutor General Viktor Grin had to apologize. In addition, the SD stubbornly continues to pretend that nothing new is happening in the affairs of the "entrepreneur" Konstantin Ponomarev. 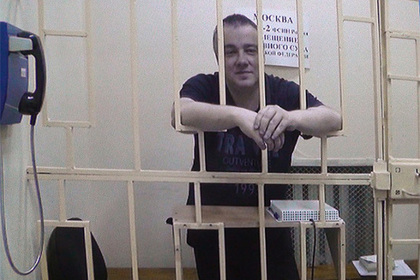 It is not a secret for those concerned that the figure of the former Prosecutor General looms behind Ponomarev's successes, with whom it was possible to establish contact through Ponomarev's neighbor in Khimki, the all-powerful Natalia Veselnitskaya. After that, his cases improved dramatically, at the direction of the prosecutor's office, criminal cases in Vsevolozhsk and Moscow were terminated, and the latter was personally undertaken by Deputy General Malinovsky, who ordered not only to terminate the criminal case, but also to check the actions of the victims. After this level of interference, representatives of the Ministry of Internal Affairs and the FSB lost interest in the figure of Ponomarev for a long time. However, instead of enjoying the honestly stolen billion dollars, he again took up the old one and threw the state this time. In 2015, the Main Investigative Directorate of the Investigative Committee of the Russian Federation in Moscow initiated 2 criminal cases on tax evasion totaling 8 billion rubles, and Ponomarev's funds were arrested. But the procuratorial roof instantly set in motion, and the decisions to initiate proceedings were canceled by the Moscow Prosecutor's Office. Investigators of the TFR showed adherence to principles and appealed against these decisions with higher prosecutors. The case ended in the fact that the super-cautious Yuri Chaika was forced to personally sign his signature, under the decisions taking 8 billion rubles from the Russian treasury. The formal reason to refute the collegial decision of the Inspectorate of the Federal Tax Service, the Ministry of Internal Affairs and the Investigative Committee of the Russian Federation was the decision of the magistrate of the Ramensky district of the Moscow region.

Unable to withstand such an impudent violation of departmental subordination, the FSB of the Russian Federation took up the case, and it soon became clear that the said decision of the magistrate court was obtained on the basis of false testimony of witnesses bribed by Ponomarev, who testified about it. There was nothing to cover the prosecutor's office with such a trump card, and Yuri Chaika's position in 2019 became too precarious to speak out against the FSB in defense of the swindler, and in July 2019 Ponomarev was convicted on 4 episodes of Article 306 of the Criminal Code of the Russian Federation. And already in January 2020, Chaika left the post of Prosecutor General, and soon the Investigative Committee of Russia, having received the opportunity to work without obstacles, sent a criminal case on three episodes of Ponomarev's criminal activity to the court, who, in addition to the very tax evasion, was recalled an attempt to throw the state by 5.5 billion rubles according to the already familiar diesel-generator scheme, which, impudent under the all-powerful roof, Ponomarev used when supplying equipment to the Crimea, during the difficult time of the energy blockade of the peninsula. In court, the machinator's adventures were appreciated and sentenced to 10 years in prison. The TFR and the Prosecutor's Office proudly reported that the convicted Ponomarev turned out to be the largest tax evader in history. Thus, the principled and consistent position of the FSB and the Investigative Committee of Russia made it possible to stop an attempt to steal 5.5 billion rubles, and return 10 billion rubles in taxes to the treasury, even if for this it was necessary to wait for Yuri Chaika's resignation.

At the same time, a completely different position has developed in the Ministry of Internal Affairs of the Russian Federation, whose employees have shelved a number of criminal cases and materials against Ponomarev, and pretend that since 2013-2014, when these cases were discontinued at the direction of the General Prosecutor's Office, nothing has changed. and he is still a respectable entrepreneur, not a fraudster, already convicted of 7 episodes of criminal activity. The SD of the Ministry of Internal Affairs of the Russian Federation repeatedly refuses not only to reconsider, but even simply to verify the circumstances of the termination of criminal cases, despite the fact that the decisions of the courts, to which the Deputy Prosecutor General referred in their demands, have long been canceled, and decisions opposite to them have been made, just like in the situation with the Ramenskoye Magistrate Court and tax evasion. I would like to believe that such a position on the cases, in the outcome of which the former attorney general is interested, is caused only by the close ties of the loyal "old guard" of the supervisory agency, loyal to him personally, with their submissive ones, which is still maintained despite the reshuffle "at the top". In this case, there is hope that these rearrangements, with which we began, were not in vain and sooner or later the requirements of the law and the interests of the state will outweigh the personal interests of the “deep state” force from the Chaika's nest. 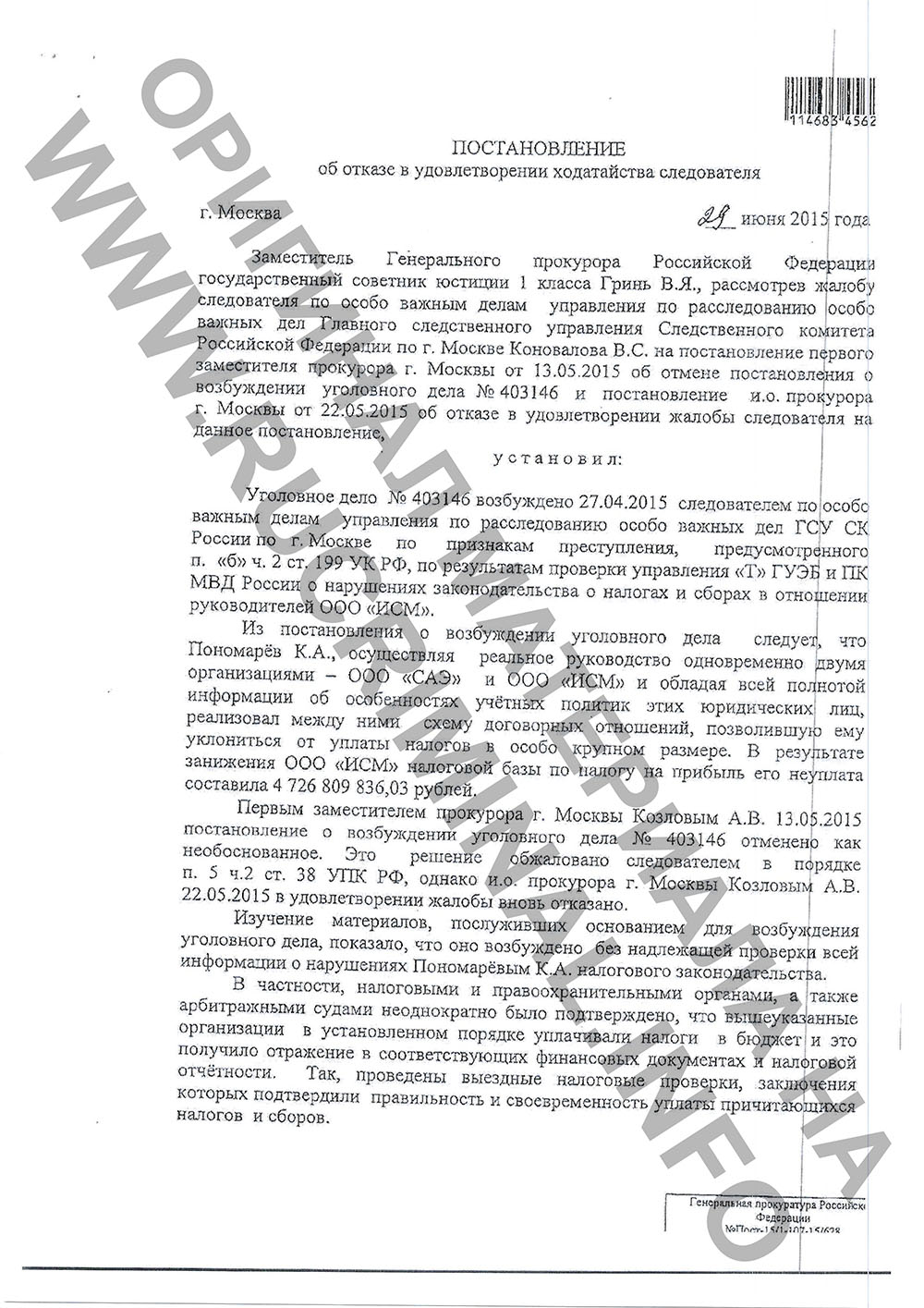 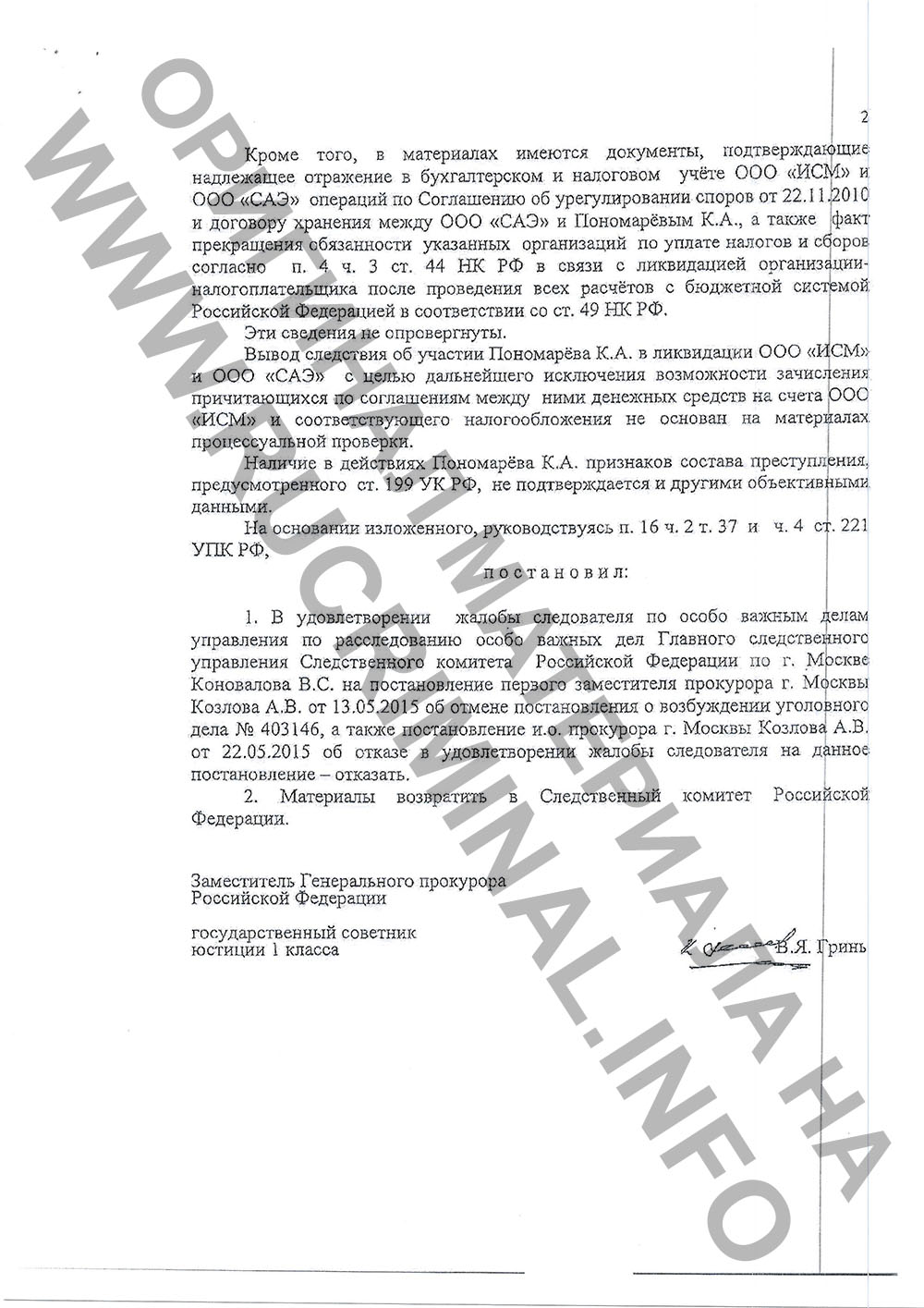 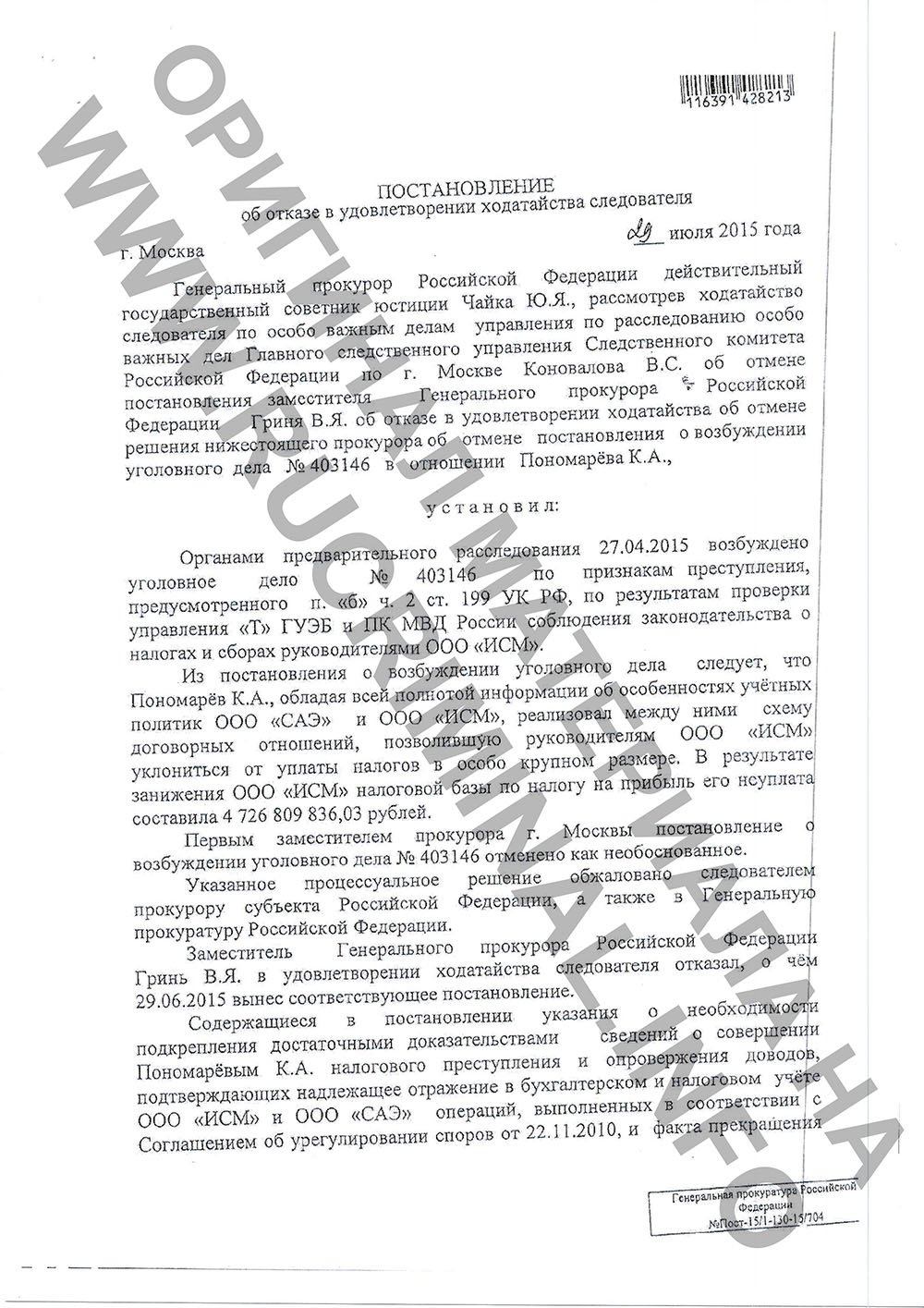 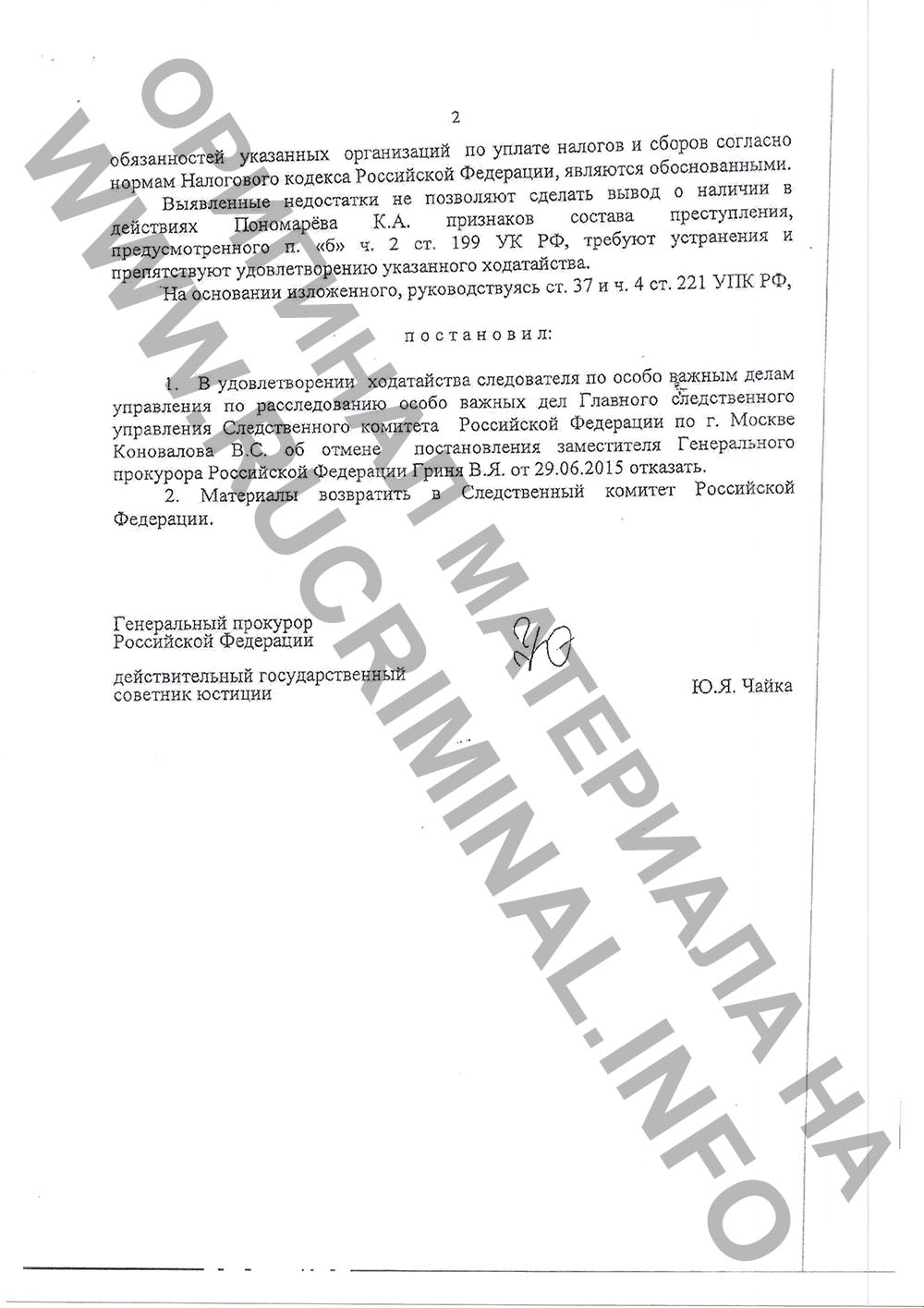