A new criminal case may be filed against Mikhail Maksimenko 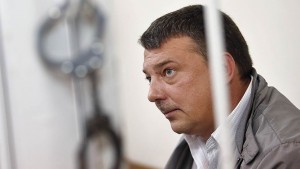 As it became known to Rucriminal.info, a new criminal case may be instituted against the former head of the Main Directorate for Interdepartmental Interaction and Internal Security of the TFR Mikhail Maksimenko. One of the defendants in a major St. Petersburg investigation, Igor Boytsov, testified that right during the interrogation Maksimenko and his good friend "authority" Badri Shengelia forced him to rewrite a property worth $ 3 million. Shengelia itself is no longer alive - in September 2018, killers shot him. It's a pity. He could tell a lot of interesting things, not only on this, but also on many other similar ones. Maksimenko himself is believed that during the investigation he did not give any evidence, referring to Article 51 of the Constitution. This is not true. At the initial stage of the investigation, he testified and expressed his version of the events. Rucriminal.info publishes Boytsov’s testimony, as well as what Maksimenko told investigators. "Fighters IB testified that in February 2009 he was prosecuted for a property crime and was in custody. During one of the investigative actions, which was carried out by the investigator Pipchenkov O.V., Maksimenko M.I. and Shengelia B.A. At the same time Shengelia B.A. offered his services in compensation for damage to the injured party in his (Boytsova S.N.) criminal case in the amount of $ 1.5 million, subject to the transfer to him (Shengelia B.A.) of a property worth more than $ 3 million, which was done later. volume 4, l.d. 149-152. "

This information was reported to investigators Igor Boytsov. And now Rucriminal.info gives the testimony of Mikhail Maksimenko.

“The testimony of the accused:

The accused Maksimenko MI, who is guilty of receiving a bribe on an especially large scale from B. Shengelia, that is, the commission of a crime under Part 6 of Art. 290 of the Criminal Code, did not admit, refused to testify when charged with the final version.

At the same time, during previous interrogations, as a suspect and accused, he explained that he knew the head of the structural unit of the GUSB of the Ministry of Internal Affairs of Russia in the North-West Federal District Timchenko Yu.A., his subordinate Fedosov V.G. and the head of the department of the Main Investigative Directorate of the Investigative Committee of Russia Zinova S.N.

With Zinova S.N. He met in about 2009-2010 during a criminal case against V. Barsukov (Kumarin) Zinova S.N. for that period of time, she was not part of the investigative group, but was Deputy Pipchenkova O.V., who was the head of the department of the Main Investigative Directorate of the Investigative Committee of Russia and at the same time headed the investigative group in this criminal case. In the unit headed by her, there may have been criminal cases isolated from the main case against V. Barsukov (Kumarin), for which, inter alia, security measures were taken against B. Shengelia. The indicated person was one of the witnesses in the case and in this connection he (Maksimenko MI) interacted with the officers of the USB FSB of Russia and the FSB of Russia in St. Petersburg and the Leningrad Region, who directly carried out state protection of the said person. Around 2015 or 2016, the FSB officers of Russia announced that they intend to stop applying protective measures against B. Shengelia. This request was forwarded to Zinova S.N., who objected to this, which was reported to the FSB officers.

With Shengelia B.A. He met during the period of 2008-2010 in the building of the Central Statistical Office of the Investigative Committee of Russia in St. Petersburg during the interrogation of the latter as a witness. He subsequently contacted the indicated person solely on official matters, mainly regarding the transfer of B.A. Shengelia. information on the facts of threats received to him and offers of bribery. Communication took place both through personal communication and through telephone communications. Last time I met with Shengelia B.A. in 2014 or 2015 during a meeting with S. Zinova in the cafe of the hotel "Pulkovskaya" on Sq. Victory in St. Petersburg. The conversation was purely official in nature and took place at the initiative of Zinova S.N. There were no financial relations between them (Maksimenko M.I. and Shengelia B.A.), no cash from Shengelia B.A. did not receive.

He knows that Shengelia B.A. filed a statement about the theft of expensive watches from him by police officers in December 2014. A subsequent check on this fact was carried out by the General Directorate of the Investigative Committee of Russia in St. Petersburg. He did not intervene in its course and results, he does not know the reasons for the transfer of the materials of the specified verification to the State Security Service of the Investigative Committee of Russia.

Initially stating that he did not remember the fact and circumstances of conducting an internal audit in relation to the employees of the General Directorate of the Investigative Committee of the Investigative Committee of Russia in St. Petersburg, who had carried out a preliminary investigation into the act of embezzlement of watches from Shengelia B.A., Maksimenko M.I. after presenting the evidence, he explained that in June 2015 he did sign a memorandum addressed to the Chairman of the IC of Russia on the need to conduct the specified internal audit. This report was compiled on the basis of information received from OSB Zapad RUSB GUSB Ministry of Internal Affairs of Russia under circumstances not known to him (Maksimenko MI).

Also Maksimenko M.I. I could not explain the circumstances of the report of this note to the Chairman of the Investigative Committee of Russia, who decided not to involve employees of the GUPK of the Investigative Committee of Russia to conduct an internal audit, who initiated the inclusion in the operative part of the conclusion on the results of the internal audit of the item on the transfer of the pre-investigation check on the theft of watches from Shengeliya B .AND. from the production of the GSU SK Russia in St. Petersburg to the GSU SK Russia, the circumstances of the direction of his deputies Volkova N.V. and Lamonova A.N. in St. Petersburg to control the correctness of the findings of the internal audit.

Based on the information received from OSB "West" of the GUSB of the Ministry of Internal Affairs of Russia, a memorandum was prepared in the name of the Chairman of the IC of Russia on conducting an internal audit in respect of the employees of the General Directorate of the IC of Russia in St. Petersburg. After that, this service check was carried out.

Cash from Shengelia B.A. He did not receive and could not receive hours for resolving the issue of initiating a criminal case on the fact of theft from him, since B. Shengelia the FSB of Russia constantly escorted him, who guarded him as a witness in the case of V. Kumarin The investigation regards the testimony given by Maksimenko M.I. during interrogations as the accused, as unreliable, due to the fact that they are inconsistent and internally contradictory. The critical assessment of these testimonies was also influenced by the fact that, upon presentation of concrete evidence during interrogations, Maksimenko M.I. initially refused to testify in view of the fact that he allegedly did not remember the circumstances of the incident, and subsequently refused to testify at all on the basis of Art. 51 of the Constitution of the Russian Federation.