Gray cardinal from the State Duma 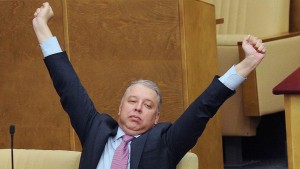 By the age of 11 in a strict regime colony and a fine of 100 million rubles. each was sentenced by the Moscow City Court of the Interior Ministry colonels Yevgeny Kashmatov and Dmitry Ataev. The court found it proven that the operative of the capital's UEBiPK and his colleague from the Main Directorate of Security of the Ministry of Internal Affairs received 20 million rubles. from Andrey Chesnokov for the termination of inspections of JSC "Company EMK-Engineering", in which he held a leading position. Chesnokov himself is also in custody for embezzling funds from the Ministry of Defense. According to the telegram channel VChK-OGPU, Chesnokov is an extremely interesting person. Previously, he was close to Kovalchuk and was the top manager of the Rossiya bank. At the time of his arrest, Andrei Chesnokov was Deputy Chairman of the Board of Trustees of the St. Petersburg State University of Economics. And the chairman of this council is the head of Gazprom, Alexei Miller. As the publication delta.news found out, in fact, a lot is connected with the gas industry. The Kontur.Fokus system sees the involvement of a businessman in 17 legal entities. Among others, he was the general director of CJSC Gazenergoprom-Invest, managed CJSC Gazenergopromleasing and JSC Gazleasingtek. Behind all these companies are the structures of "Gazprom", and the portfolio of state contracts "Gazleasingtek" - under 3.5 billion rubles. However, for Gazprom it is not that much.

The Ministry of Internal Affairs of the Russian Federation accuses Chesnokov of involvement in the theft of about 500 million rubles on construction contracts of the Ministry of Defense. Here is the JSC "Company EMK-Engineering" (EMK). Since May 2020, she has been a full-fledged bankrupt, but earlier - these are contracts for 17.9 billion rubles. The Kontur.Fokus system does not see Chesnokov in this joint-stock company, whose roots are sprouting in the Cypriot offshore company, but the investigation, as you know, is keener.

In addition, Sergei Stanislavovich Shtykov was in charge of this company for several years. Another Shtykov - Yevgeny Stanislavovich, runs Gazenergopromengineering, behind which one can see the structures of Chesnokov.

In the near future, investigators are preparing to present Chesnokov with new episodes of theft, now according to St. Petersburg schemes. According to a Rucriminal.info source, this primarily refers to theft in the energy sector, where Evgeny Stanislavovich Shtykov, General Director of one of his companies, CJSC OPEC Management Company, testifies against Chesnokov. He does not give testimony anywhere, but immediately to the Directorate of the FSB of the Russian Federation in the central office.

The Rucriminal.info source said that, of course, Chesnokov himself was not the organizer of all financial scams. And from it an extremely interesting chain is built. If the investigators show courage, their investigation will certainly lead to the Zarubezhenergoproekt company, which is engaged in the construction of energy facilities around the world, including nuclear power plants.

One of the board members of this organization is the "father" of the "energy" schemes in which Chesnokov was involved - Sergei Stanislavovich Shtykov. Yes, yes, he is a long-time partner of Andrey Gennadievich Chesnokov and one of the main beneficiaries of the EMC scams. Moreover, if you look at it, then Sergei Stanislavovich Shtykov is also only a creature and a representative of interests. Who is behind him and Zarubezhenergoproekt? The company is in the sphere of interests of the inconspicuous deputy of the State Duma of the Russian Federation from the Communist Party of the Russian Federation Vadim Valentinovich Kumin. But it is inconspicuous only for a wide range of people. To the chosen few, Vadim Kumin is known as the “gray eminence” of the energy industry, who has a very special and trusting relationship with a whole number of senior officials of the power block. According to Rucriminal.info, Chesnokov will be presented with new episodes of fraud with direct "contracting" without tenders for the construction of several energy facilities in St. Petersburg, as well as for the theft of an electric sewage system on Krestovsky Island in St. Petersburg.

Chesnokov also had good cover in the power unit, but, of course, not comparable to Kumin. Thanks to this "cover" Chesnokov took part in more than 15 operational activities. Here is just a small list of cases and operational activities with Chesnokov's participation. In 2019, he directly (he wrote a statement and organized a wiretap) put FSB officer Kirill Libenko, who was carrying money to the chairman of the St. Petersburg Committee for the Improvement of St. In 2019, Chesnokov, through his face value Shtykov Yevgeny Konstantinovich, tried to imprison the son of Bastrykin's deputy, Elena Leonenko, Igor Leonenko. We are talking about materials related to ZAO UK OPEC, in which Chesnokov is the owner. In 2018-2019, Chesnokov tried to send one of the top managers of Lenenergo, Andrey Vasilyevich Malkov, to the pre-trial detention center. To do this, Chesnokov wrote a statement about the theft of equipment from one of his companies in relation to JSC "Petrodvortsovaya Electricity Network" and Lenenergo. Thus, putting at risk the former general director of Lenenergo - Sizov Andrei Andreevich, who is a close friend of Konstantin Goloshchapov and Vagif Mamishev. Chesnokov planted the former deputy head of the 11th department of management "C" - the head of the 1st department of the Main Directorate of Security of the Ministry of Internal Affairs of Russia Dmitry Ataev and the ex-head of the 12th department of the 4th ORCH of the Department of Economic Security and the Corruption of the Main Directorate of the Ministry of Internal Affairs in Moscow Evgeny Kashmatova.