The career of a Deputy head of GSU SKR across Moscow has provided "a fixer" Dmitry Smychkovski? 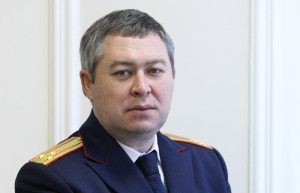 In the near future, the GSU RF IC in Moscow may have a new Chapter. While this Department with the prefix I. O. headed by Andrei Strizhov. The main applicant for the vacant place is the "aksakal" TFR, the famous investigator Sigmund Lojis, who now heads the Main Department of criminology of the Investigative Committee. With his arrival in GSU across Moscow by all means there will be personnel changes. By information Rucriminal.info, one of the main candidates for elimination of the Deputy head of GSU Sergey Sinyagovsky. The former leaders of the capital of the investigation, including the former head Alexander Drymanov and his former Deputy Denis nikandrova, are in custody on charges of taking bribes for the release of the "authority" Andrey Kochanova (Italian) – associate the "thief in law" Zachary Kalashov (Shakro young). In the materials of the investigation, Sergei Sinyagovsky is repeatedly mentioned, including interesting details about him. Sergey's father is the former mayor of Novorossiysk, and now the Deputy of the state Duma of the Russian Federation Vladimir Sinyagovsky. Many thought that it also promotes career of the son. However, he had other patrons. As follows from the materials of the case, the promotion of Sinyagovsky in the service was promoted by the resolver Dmitry Smychkovsky, who is now wanted for bribing employees of the TFR in the amount of $ 1 million.

For a start Rucriminal.info quotes the testimony of Denis Nikandrov. It follows that with Smychkovski he met in the office Sinyagovsky. A senior official of the RCDS Mikhail Maksimenko Nikandrov admitted that Sinyagovsky had to fire oni, and he stayed with requests Smickovska.

On June 15 or 16, 2016, S. V. Sinyagovsky approached the witness and asked him to tell what happened to the case of Kochuikov and Romanov, why he was transferred. My question was motivated by the interest in this situation Smickovska D. E. Apparently, Smickovska D. E. just don't have anywhere else to turn with this question, because all his contacts in the face Maksimenko, M. I., A. A. Drymanov Kramarenko and A. I. were outside of Moscow. Nikandrov, D. V., said S. V. Sinyagovsky that the case of ATC CAO, and GSU SK of Russia across Moscow to do with him no longer," said Denis Nikandrov during the interrogation, the Protocol of which is available Rucriminal.info.

Further we quotes the testimony of the Sinyagovsky. They imply that he has repeatedly met and was friends with Smychkovski and Noordeinde Togusa. The latter is also a person known to the security forces. He was among those arrested in the case of former interior Minister of Buryatia and the head of the Azov-black sea uvdt General Viktor Sucuri, who was accused of involvement in smuggling to 88 million rubles.

Here is what testimony on Nurudin Tuguz gave one of the witnesses in the case of smuggling of Amhaz Haissam Abdo: "..Earlier, I testified against Togusa Nurdin of the Republic of Kazakhstan and the former head of the Azov-black sea uvdt Sucuri V. L. In the course of this interrogation, I want to clarify them and to give and to give additional testimony. Currently I know that TUGUZ N. M. arrested by law enforcement officers. Earlier, when he was at liberty, I feared for my life and health and could not tell investigators all I know of the circumstances of the participation TOGUSA N. M. and SUCURI V. L. in the smuggling of goods across the customs border of the Russian Federation".

Now Rucriminal.info results which gave evidence of the Sinyagovskiy in the framework of the "business Shakro": "criminal case initiated on 15 December 2015 on the events at the restaurant "Elements" on the street Rochdelskaya in Moscow, was in the production of the investigator for particularly important cases of the first Department for investigation of particularly important cases of GSU SK of Russia across Moscow Suprunenko A. B., and was in charge of them (S. V. Sinyagovsky) in the period from 16 December 2015 to 15 February 2016. At the same time, since the beginning of February 2016, this case was actually being studied in the Department of procedural control over the investigation of particularly important cases. Also 13 Jan 2016 criminal case was initiated against Kochanova A. N. on the grounds of extortion, which was also in production Suprunenko A. B. Then, on 11 and 15 February 2016, the specified criminal case was at the direction of A. A. Drymanov or Nikandrov, D. V., transferred to the production Department for investigation of crimes committed by officials of law enforcement agencies.

In the period when he (S. V. Sinyagovsky) oversaw the investigation of criminal cases on the fact of events at the restaurant "Elements" on the street Rochdelskaya in Moscow, to him by prior arrangement, came his friends Smychkovski D. E. and Tuguz N. M. and became interested in the investigation of these cases. The content of the conversation, he concluded that Tuguz N. M. somehow familiar with Kochanova A. N., however, with any of the requests in this case Smychkovski D. E. and Tuguz N. M. it has not been accessed, it came down to the common phrases and then these cases were taken from his curation.

Together he saw the specified persons once again in the spring of 2016 on Stary Arbat street in Moscow near the building of GSU SK of Russia across Moscow, the meeting happened incidentally when he saw them sitting at a table of one of cafe, but they didn't explain the stay in this place".