Serdyukov took up the old Colleagues and subordinates of the former governor of the Amur Region and the current top manager of Rostec Nikolai Kolesov were serving sentences for financial crimes. Nikolai Alexandrovich himself, to all appearances, was then an unmercenary among thieves. Because he got off with resignation. True, "due to the loss of confidence."

He immediately became the head of the Concern of Radio-Electronic Technologies (KRET), which includes more than 70 Russian enterprises that produce electronics. And it rushed.

As sources told Rucriminal.info, the enterprises of the concern began to receive hundreds of billions of rubles of government money. For all. From aviation systems to ventilators. Here is such a distrust. And here is such a specialist.

KRET beneficiary Nikolay Kolesov makes excellent money on government contracts. He bought himself and his children several factories belonging to the Concern, and the family business stood guard over the interests of the state. 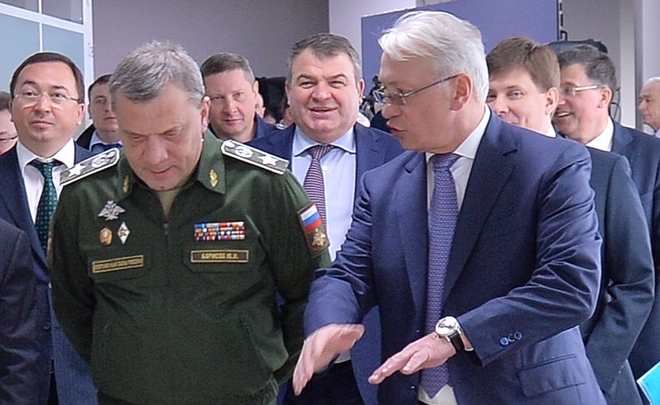 For example, KRET is the customer of the family-owned KOMZ JSC - Kazan Optical and Mechanical Plant. The state order portfolio of the enterprise is now about 3.5 billion rubles. Another asset of the family is the Elekon Plant JSC, which at various times was managed by Kolesov himself, his daughter Anastasia, son-in-law Nikolai Kraev, son - Alexander Kolesov - the head of the plant to this day. The plant has government orders for 5 billion rubles.

Simply by scrolling money from one plant to another, Kolesovs can have fabulous profits.

But this is not enough. On the basis of KOMZ, a special subdivision for the production of Lever electronic warfare systems is being created. At the same time, another near-helicopter enterprise, JSC Stella-K, was opened, which produces and installs onboard defense systems on turntables. Expensive equipment puts a heavy burden on end manufacturers and brings losses. Nevertheless, they are installed on KVZ and Rostvertol helicopters by order.

These events aptly coincide in time with the "resurrection" and the empowerment of Kolesov's best friend, industrial director of Rostec, Anatoly Serdyukov. Friends felt the sweetness of victories. And we decided to go further - to sell helicopters ourselves. Buy at cost, mark up and resell. It is no coincidence that the Alliance Avia airline was recently created, which received helicopters from the Ulan-Ude plant.

It was the industrial director of Rostec that in this case made the decision to dispense with procurement procedures.

Today, the vehicles are used to serve the aviation interests of high-ranking officials. But, we think, as soon as a buyer is found, they will be resold. Potential buyers of the only Russian supplier of helicopters, JSC Russian Helicopters, will again take the money away from the state pocket to the private one.

They do the same with Ansat, bringing a colossal loss to Kazan Helicopters. The work on the modernization of machines instead of the underutilized Rostvertol, which has a repair base, was transferred to Kolesov by the decision of Anatoly Eduardovich.

But the helicopter span of C and K is becoming small. They swung at our Yuri ... Slyusar, Manturov's protege. According to a source of Rucriminal.info, undercover attempts to remove him from the post of general director of the UAC and appoint him to a position that would entice prospects and opportunities do not stop ... who do you think? That's right, Kolesova. We understand that government subsidies for the construction of aircraft are many times greater.

The materials on the presumptuous businessman have repeatedly come to the attention of the regulatory authorities. But noisy seizure of documents and searches always ended in noise. Nikolai Aleksandrovich is famous for his ability to organize and finance a charter flight to the right people on time. And Anatoly Serdyukov cannot be discounted. He has not lost the support of the elites, he also knows how to organize a joint vacation with the leadership.

The feat of Nikolai Alexandrovich in a narrow, but such an influential circle is considered so significant that a merchant regularly presents himself to state awards. At present, the Government of the country is considering an application for conferring the title of Hero of Labor on him. We wait.