Why does a billionaire clean up the past? 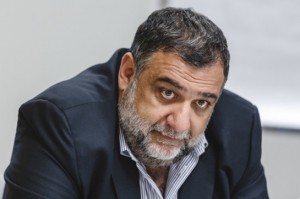 Employees of businessman Ruben Vardanyan deleted one of the most popular Wikipedia sections on Vardanyan’s page on money laundering and Troika Dialog’s offshore network. Now the eyes are pleased with reports of charity, philanthropy, publishing books and Vardanyan's awards. This was noticed in Transparency International, according to the Bankst telegram channel.

What has disappeared from Wikipedia? OCCRP investigation of the offshore network through which Troika Dialog Investment Bank Ruben Vardanyan in 2006–2012 secretly transferring money.

About 3.5 billion euros went through the Lithuanian banks Ūkio and Snoras. Then they were washed through offshore. OCCRP wrote that Troika Dialog, in particular, could participate in a tax refund scheme from the Magnitsky case and withdrawal of money from Sheremetyevo Airport.

“The deductions from the Troika offshore system to the relatives and friends of senior Russian officials who managed to find OCCRP were more of an episodic nature, the authors of the investigation specified. “The main payments are connected with Ruben Vardanyan himself, his family and his inner circle - big businessmen and politicians, who are usually called“ young reformers ”or“ systemic liberals. ”

At the disposal of Rucriminal.info there is a certificate from one of the special services about 10 years ago, which would also look very good in Vardanyan’s biography on Wikipedia. Here are excerpts from it.

“In the course of his work in early 1993, Igor Yusufov, through close authority of Lalakin Sergey (Luchok), established working relations with one of the leaders of the Armenian diaspora Vardanyan Ruben (owner of Troika Dialog Asset Management Company until 2011). The thief in law Aslan Usoyan (Grandfather Hassan) was organizing the meeting on the part of Vardanyan. Ruben Vardanyan introduced Yusufov to one of the founders of the International Computer Club Levon Amdilyan and Mikhail Mishustin, who have been involved in the integration of the latest in the Russian market of computer products and services since 1992. In the course of the current relationship, Yusufov from this time to the present repeatedly resorted to the specialists of this organization to get help in creating the smooth operation of the operators of their banking sites engaged in cash withdrawal in Dagestan and Moscow (CB Dagestan, OJSC Sberbank, CB “ Slavic ”, CB“ Slavia ”, CB“ Master Bank ”, Russian branches of Deutschbank of Germany, Fondservisbank, Mostransbank, Russian Land Bank, Vozrozhdenie, Mosoblbank). Also, specialists of the International Computer Club, through the development of new programs, ensure uninterrupted communication of bank operators with foreign partners to withdraw funds to foreign bank accounts in Europe, America and Asia, ”the statement reads, excerpts from which Rucriminal.info publishes.

“Ruben Vardanyan with businessman Rajat Gupta (formerly an independent member of the Yukos Supervisory Board (2000-2004) and the Sberbank of the Russian Federation (until 2011)) are possible accomplices in an international crime related to the organization of a fraudulent securities trading scheme.

At the end of 2009, the founder of the Galleon hedge fund, American billionaire Raj Rajaratnam and 5 other financiers were accused by the U.S. police of earning about $ 20 million in illegal profits from insider information relating to such global business giants as Google, AMD and Hilton Hotels.

According to US prosecutors, for more than 20 years they have not encountered such a large-scale insider information business as the Galleon hedge fund. Since October 2009, 21 people have been arrested in this case, 11 of whom have already admitted to their deeds. Among them is former McKinsey consultant Anil Kumar, who is now collaborating with the investigation. He admitted that he, Vardanyan and Gupta received $ 2 million from Galleon for insider information. And the US Justice estimated the profit of the creators of the fraudulent scheme at $ 20 million, the SEC at $ 25 million. The scammers earned this money in 2006-2009. on insider trading with shares of Google, IBM, Sun Microsystems, Hilton, Advanced Micro Devices. At that time, the assets of the Galleon Group amounted to $ 3.7 billion, and the founder and manager of the fund, Raj Rajaratnam, held 559th place in the list of the richest people according to Forbes with a capital of $ 1.3 billion.

In early 2006, Rajat Gupta and Shiv Kemka (Deputy Chairman of the Board of Directors of Sun Group, has business in Russia) brought to Russia the idea of ​​creating a world-class business school and found support from the Chairman of the Board of Directors of Troika Dialog Group Ruben Vardanyan, who organized the meeting in the lobby bar of the Hotel Baltschug with Mikhail Mishustin (head of the Federal Agency for Management of Special Economic Zones 2006-2008) and German Gref, at that time the Minister of Economic Development and Trade of the Russian Federation. ”