"Rauf Arashukov asks to kill the offender within a week»

As ex-Senator "ordered" the elimination of Aslan Zhukov 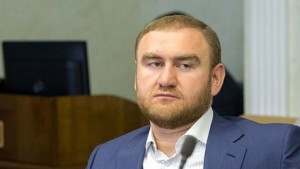 Rucriminal.info he spoke in detail about how Rauf Arashukov "ordered" the assassination policy of Frala Shebzukhova. In a new series of publications, we will describe how the ex-Senator dealt with his other victim - the leader of the youth movement "Adyge-Hase" Aslan Zhukov. As planned and carried out the crime investigators recounted by his Rasul Adzhiev.

According to Rasul adzhieva, in 2005-2006, he was found near the cafe "Old yard" with his friend Arthur Kokhavim, named Thuja. I saw a gun in his belt. Rasul asked to see the weapon and found that a friend's pistol "Makarov" with 8 rounds. Ajiyev began to ask to give him a gun, which Tuya did. He's kept it at home ever since.

"Around 2009 I met Agaevym Ruslan. It was an event dedicated to the birthday of his son Ruslan Arashukov, which took place in the building of the hotel" Intourist " in Stavropol. I was personally invited to this event by Ruslan Arashukov, with whom we were familiar earlier. The celebration was attended by a large number of people. Toastmaster at this event was a guy named Alan, his name I do not know, he is a relative of Ruslan Arashukov. During the feast in front of me sat Ruslan Agoev and offered to meet, explained that he had heard a lot of good things about me. ... Subsequently, I met with Agoev Ruslan many times in Stavropol, including at the car wash "Moidodyr", which belongs to the Arashukov family, " said Adzhiev during the interrogation, the Protocol of which is available Rucriminal.info ahhh!

According to Rasul, he had friendly relations with Agaevym, he often visited him. As Agaev said "repeatedly praised" on Adzhiev Rauf Arashukov. In March 2010, when Adzhiev was in Cherkessk, he was called by Agoev and asked to drive up to the house of Rauf Arashukov. "During the conversation, Ruslan Agaev explained that he is acting at the request of Rauf Arashukov that he can not leave, as fears of spreading information about our meeting. Ruslan Agoev began to tell that at Rauf Arashukov there was with someone the conflict as a result of which his honor is affected. On this basis, Rauf Arashukov fell into a depressed state, while all his entourage turned away from him and does not want to punish the offender. Ruslan Agoev said that Rauf Arashukov is ready to allocate one million rubles for physical elimination of this person, namely his offender. Initially, it was about the murder of the person, and not about causing him physical damage. In this regard, Ruslan Agoev gave me a request of Rauf Arashukov to help find people who would agree to commit murder for the specified amount. At the same time Ruslan Agoev said that it should be done within one week. Why so limited time Ruslan Agoev did not explain, pointing out that this requirement Rauf Arashukova. ....I then expressed surprise to Agoev's words as earlier heard from him criticism to Arashukov connected with his unscrupulous acts concerning people around. To this Agoev replied that the last few days he openly talked with Arashukov, and the latter repented of his previous actions. Also Agaev said Rauf Arashukov wants to set me friendships. During communication Agoev came into the house to consult with Arashukov...during our conversation which lasted 15-20 minutes, Agoev several times came into the house to talk to Arashukov. When Agoev once again came to me, he said that Rauf Arashukov has a larger amount of money that could be allocated to address this issue, currently there is no, in General, he is now in a difficult financial situation. In the course of communication Agoew several times repeated that the question concerns the honor of Rauf Arashukov. By results of conversation I told that to Agoev that I can solve this problem, that is to commit murder of the person-the offender Rauf Arashukov, at the same time money for it to me it isn't necessary to pay. Agoew went into the house to inform Arashukova. Leaving, Agoev told that Rauf Arashukov was glad to my decision, several times asked again as couldn't believe that I am ready to commit this crime free of charge. ...After we Agoev began to discuss the offender Arashukova. Agoev said that it is necessary to kill the owner of the car wash, located on the street Dovatora in Cherkessk. Agoev described this sink, explained that the owner moves to "Niva Chevrolet", called the license plate, described the appearance of this man, " - said in the interrogation protocols, which publishes Rucriminal.info ahhh!