The millionaire decided to surrender the supreme power of Kazakhstan 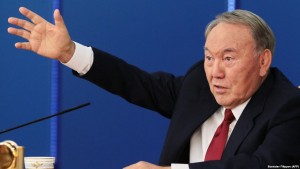 rucriminal.info continues a series of articles about American revelations of Kazakh oligarch Kenes Rakishev. They were voiced by Rakishev in the US court, where the lawsuit of BTA Bank was examined against the former owner of the bank Mukhtar Ablyazov, the former head of the capital of Kazakhstan Viktor Khrapunov and his son Ilyas Khrapunov. At the disposal of rucriminal.info was a transcript of the interrogation of Kenes Rakishev, during which his questions were driven into a dead end. In this publication, readers of rucriminal.info will see how under the pressure of opponents Rakishev openly admitted that the son-in-law of President Nursultan Nazarbayev Timur Kulibayev received the largest bank in the country for only one dollar.

Q. Mr. Rakishev, have you ever heard of Elena Tishchenko?

R. In my opinion, this is a witness.

Question: Is it a witness, in your opinion, possessing information related to this case?

Q. When you say that she is a witness, does this mean that you think she has information about Mr. Ablyazov or the Khrapunovs?

R. I know that she is a witness in respect of some cases related to BTA Bank, but without specificity. This is what my attorneys learned from the lawyers of BTA Bank.

Q. Do you know whether Mrs. Tishchenko was amnestied in exchange for her cooperation in the proceedings against Mr. Ablyazov?

R. I believe that my lawyers could answer this question, but not myself. If I tell you that I do not have any details about the cases on which she is a witness, since I can know what those details are?

Question: I understand. But I'm not asking for details. I'm just asking, did you know that Ms. Tishchenko was amnestied in Russia in exchange for testimony?

R. I do not know such details.

MISTER. Curly: I'm almost done. Can I have five minutes to regroup?

Videographer: We turned off the recording. The time is 2:55 pm

Videographer: We're on record now. The time is 3:03 pm

Q. I just want to ask a few more questions. We spoke early in the morning about the foundation of Sat & Co.?

Q. You said that you invested with two partners, did not you?

Q. Who were the two partners?

R. At some point in time, he was a shareholder, yes.

Question: Is he now a shareholder?

Q. Was he the owner of any part of the company before the IPO?

R. Yes, before the IPO, he was a shareholder, and then I bought.

Q. Mr. Rakishev, do you remember the meeting on April 24, 2014 in Moscow to discuss the criminal case against Mr. Ablyazov?

Q. Have you ever been to a meeting in Moscow during which the extradition of Mr. Ablyazov was discussed?

R. In my presence, nothing like this has ever been discussed. I think the only thing we discussed was the ongoing investigation.

Q. Have you ever been to a meeting in Moscow where Ms. Tishchenko was discussed?

Question: Have you ever heard the statement that Mr. Ablyazov financed terrorist activities?

R. I do not remember.

Q. This is a pretty serious charge, is not it?

Question: Will it be fair to say that someone made such an accusation, do you remember?

R. I do not remember, to be honest.

Q. Mr. Rakishev, one last question. Do you remember how much Halyk paid for Kazkommertsbank?

R. Again, this is not what I remember or not, it's public information. In addition, Halyk - Halyk is a public company, and there is no way that they can hide this information.

Q. I do not want to get into a discussion with you

Q. President Nazarbayev's son-in-law belongs to Halyk while Halyk paid $ 1 for Kazkommertsbank, is that right?

MISTER. SCHWARTZ: Objection.R. First of all you can check this and see all this information in the public domain. We never concealed anything about this deal, it was an open deal. If this is related to the case in New York, you can officially request this information from Halyk Bank and Kazkommertsbank and get a response to your request. Nobody hid anything

MISTER. Curly: You can just read back the question, please.

Q. Is it a yes or no? Is it true that President Nazarbayev's son-in-law belonged to Halyk Bank at the time when Halyk paid BTA $ 1 for Kazkommertsbank?

R. This is a difficult question, and it has nothing to do with our case. If you want to know all the details of this case, you must really immerse yourself deeply into it. This also applies to distressed assets that were acquired when the former management was essentially in power in BTA Bank. This is to the point, and why this deal was the result of a number of consequences. We know many examples when in any country, in the United States or in any other country, when banks were saved by nationalizing or attracting investors. I know one thing, Halyk Bank officially invested almost $ 1 billion in the bank's capital, so for them the deal was not a $ 1 deal. Thus, answering your question, whether the president's son-in-law bought Nazarbayev's bank and paid $ 1 billion for it, I can say yes.