"I received 50 million dollars from Evtushenkov" 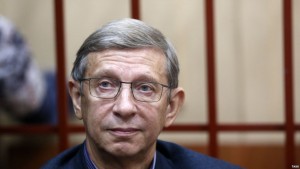 Relatives of the businessman Levon Hayrapetyan, who died in the fall of 2017 in the colony, demand from the Criminal Investigation Service of the Russian Federation to bring a case about his murder. They believe that the businessman was poisoned. Moreover, a possible murder occurred on the eve of his alleged withdrawal from the colony. Who could be so afraid of the release of Hayrapetyan? The materials that were at the disposal of rucriminal.info indicate that Hayrapetyan was in fact the only person who could testify to the owner of AFK Sistema Vladimir Yevtushenkov and his role in the history of embezzlement of Bashneft. It was Hayrapetyan who was negotiating on behalf of Yevtushenkov, through which the owner of Sistema "chased" billions of dollars. During the investigation Hayrapetyan did not denounce Evtushenkov, obviously counting on his help. As a result, the owner of AFK Sistema himself got off with a "slight fright", his persecution was stopped. A seriously ill Airapetian, who did not surrender Evtushenkov, received four years of colony. While he was serving time, he had no help from Yevtushenkov. It is clear that Levon harbored resentment against the owner of Sistema. According to sources rucriminal.info, Hayrapetyan, if he was at liberty, could start talking and then it is not known what would be the future fate of Yevtushenkov. Fragmentary to understand what Levon knew and what he could tell the investigators, you can, from the rucriminal.info, who was at the disposal of the testimony of former senator Igor Izmestyev, who is serving a life sentence. In them he repeatedly mentions Yevtushenkov and talks about his relationship with Hayrapetyan.

Thus, from Izmestiev's testimony it follows that it was Hayrapetyan who, at Yevtushenkov's request, negotiated with the Rakhimov family about the possibility of buying Bashneft, flew to Ufa on private planes together with AFK Sistema representatives. In 2005, AFK Sistema, through Sistema-Invest, controlled by OOO Sistema-Invest, became the owner of blocking stakes in the fuel and energy sector. According to Ural Rakhimov (the son of the then president of Tatarstan, who oversaw the fuel and energy sector) and Evtushenkov, the deal had to be divided into two parts. In the course of the implementation of the first part (purchase and sale of blocking blocks of shares), the parties were convinced of the seriousness of their intentions, conscientiousness, and also assessed the possible adverse effects on the part of the state authorities of the Russian Federation.

Due to the arbitration proceedings that were initiated on the illegality of privatization, everyone understood that the shares of the fuel and energy complex were illegally owned by Urad Rakhimov's companies, and the acquisition of Yevtushekov's share in the oil business obligated him to start active lobbying activities both to protect the interests of the Rakhimovs and the deal itself .

One of the big report notes on the situation with the transfer of shares of the fuel and energy complex to Rakhimov U.M. S. Veremeenko introduced the administration of the President of the Republic.

Further in the testimony of Izmestyev, who were at the disposal of rucriminal.info, the following is stated: It should be specially noted that after the first deal with AFK Sistema Interregional Inspectorate of the Federal Tax Service No. 1, claims were brought to the Moscow Arbitration Court against Bashkirsky Capital LLC, four charitable foundations, including the Ural fund and a large group of companies, in the process of consideration of which it was established that the purpose of the gratuitous transfer of shares in the fuel and energy complex was their fragmentation, the transfer of ownership of property within the same group tax benefits, as well as non-fulfillment of direct tax liabilities by Bashkirian capital through illegal liquidation.

The Federal Tax Service won all the courts, security measures were imposed on the shares of energy companies.

However, in 2009, MIFRS No. 1, in the process of appealing against decisions, unexpectedly refused claims, the proceedings on cases were terminated, and interim measures were lifted. Thus, the state lost the opportunity to return the assets that were illegally received by Rakhimov and Evtushenkov.

"The initiators of the actions of employees of the tax authorities were Evtushenkov, Rakhimov MG, Rakhimov UM, Hayrapetyan", the documents published by rucriminal.info read.

After the termination of proceedings on arbitration cases and the removal of security measures by Rakhimov and Evtushenkov, the second part of the transaction was implemented. The blocks of shares were transferred to AFK Sistema at a price of $ 2.5 billion, of which $ 2 billion in ruble terms were transferred to the accounts of OOO Ural-Invest and three other companies, $ 500 million were transferred after 6 months.

The official amount indicated in the contracts was understated. In addition, for purchased shares Yevtushenkov through foreign accounts of Hayrapetyan paid Ural Rakhimov at least $ 1 billion. Hayrapetyan boasted of close relations with the Rakhimov family, said that he acted as an intermediary in the transaction. For his services received from Evtushenkov 50 million dollars.

In the opinion of rucriminal.info, Izmestiev's testimony shows that Hayrapetyan knew absolutely everything about Evtushenkov's dark affairs and not only in the Bashneft deal. If he had spoken, then the investigators would not have stopped the case against the owner of AFK Sistema. But Levon will never be able to do this. He was poisoned in the colony.