Where does the vice mayor of Moscow have Chechen sadness? 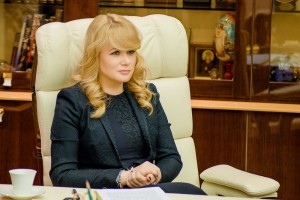 One of the most mysterious deputy mayors of Moscow Sergei Sobyanin is Natalia Sergunina, who is responsible for the economy and management of urban property. She not only banned the year of her birth on the website of the government of the capital, but absolutely you will not find information about her family life. One might think that this is an ordinary female coquetry. However, informed sources rucriminal.info suggested that behind this lies something great: the desire to hide certain facts from their biography. Our investigation showed that perhaps this is true. Formally, the former spouse of Sergunina, a native of Chechnya Movladi Natsayev, in the bases of the GU MVD RF in Moscow in the early 2000s was listed as a criminal contingent. And his antics completely confirms the similar coloring, appropriated to him by operatives. And now he is a person close to the head of Chechnya Ramzan Kadyrov.

The page of Natalia Sergunina on the website of the mayor's office states only that she was born on August 22 in Moscow. Then follows her biography, from which it follows that Natalia Alekseevna received

higher education in Moscow State University, and then, from 2000 to 2004, worked in the Ministry of Property of Russia as a consultant, advisor, deputy head of the department in the Department of Legal Support. Behind these stingy lines lies the extremely turbulent section of Sergunin's life. The 22-year-old beginning official met a handsome man from the Caucasus, Movladi, who was seven years older. Natalia and Natsayev became spouses, the couple had a point Elizabeth.

According to rucriminal.info, Movladi Natsayev was born in the city of Gudermes in the Chechen-Ingush ASSR. Then he moved to Moscow. What Movladi was doing in the capital, one can understand from the file of the GU MVD in Moscow. In 2000, shortly before acquaintance with Natalia, he was brought in by the department of the "Begovaya" Internal Affairs Directorate of the CAO to the base with the wording "criminal contingent".

After getting to know Movladi, Sergunina's career went uphill. Gradually Natsayev himself left the "shadow". Since 2006, he began to establish one company after another in various companies: Spetsservis LLC, Ariadna LLC, Avto-Milya LLC, Magister LLC.

Formally Natalia Sergunina is now listed as an unmarried woman. However, when she unexpectedly took the post of vice-mayor of Moscow in 2008, the financial well-being of Movladi also improved noticeably. He began to buy expensive foreign cars one by one. So, for example, only in 2012 -2013, its fleet, according to rucriminal.info, replenished with the following cars: AMTS MERCEDES-BENZ S500 4 MATHIS, TOYOTA LAND SRUISER, MERCEDES-BENZ GL 350 SDI 4MATSI, MERCEDES-BENZ G55 AMG.

An interesting story is connected with the last car.

In January 2012, Movladi Natsayev bought Mercedes-Benz G55 AMG worth 7.65 million rubles in Mercedes-Benz Rus. May 7, 2014, the car broke down during the movement.

In the service center of Panavto, which was engaged in the maintenance of this car, it became clear that the cause of the car's outage was mechanical damage with the destruction of the cylinder block and crankshaft. To bring the car into working condition, it was required to replace the engine with a cost of 2 500 000 rubles. Natsayev believed that this breakdown was due to industrial marriage, so he turned to Panavto and ZAO Mercedes-Benz Rus with a request to replace the engine. Service Center Panavto offered the citizen to refund 30% of the cost of the engine, and ZAO Mercedes-Benz Rus refrained from responding. Then Natsayev appealed to the court.

I wonder who helped him, given that Natalia's father, Alexei Sergunin, a former judge, and now the chairman of the bar association Sergunin and Partners. And Natalia herself is the vice-mayor of Moscow, whose opinion, of course, the city judges do not pay attention.

And a miracle happened. Usually the servants of Themis refuse the plaintiffs or award them pennies. And here Nikulinsky court admitted that "Mercedem-Benz Rus" should pay Natsayev 9.23 million rubles. With this money, Movladi bought himself another Helik.

As found out rucriminal.info, now on two "Mercedes" from a motor-vehicle pool Movladi there are flaunted such numbers - K979RA197 and K939RA197. Three letters "KRA" are familiar to every Chechen. They are deciphered, like Ramzan Akhmatovich Kadyrov. And if an ordinary Chechen hangs a similar number on his Prior, he is in for a lot of trouble. Only those who are close to the head of Chechnya can use these numbers.

A couple of years ago, Movladi Natsayev and did get into the story, which would have put the "cross" on the career of Natalia Sergunina. But, we will remind, officially she is registered unmarried. However, rucriminal.info will tell about this story another time.