“Open your mouth, break both legs” At the disposal of Rucriminal.info there were transcripts of interesting telephone conversations recorded by special services. They talked about shadow bankers Artem Stepanyants and Marat Romanov (the latter, for the purpose of conspiracy, is presented to everyone as Mikhail, Misha). Both of them, at the time of the events, were wallowing in close partners of Yevgeny Dvoskin. Dvoskin was then considered an adviser to the chairman of Genebank. This bank is one of the few that worked actively in Crimea after 2014, due to which Dvoskin received untouchable status. His curators, including Dmitry Tulin, deputy chairman of the Central Bank of the Russian Federation, represent Dvoskin as the savior of the banking system of the peninsula. No one even bothers that in the course of his work, Dvoskin withdrew 30 billion rubles from the Genbank. Romanov and Stepanyants also worked closely with Ali Zakriev, a large shadow banker from Chechnya. Together Zakriev, Romanov, Stepanyants "threw" 100 million rubles to the owner of the payment system "Delta Kay" Andrei Novikov. And they are actively discussing, on the records, how to "wash" these funds. So, during one of the conversations published by Rucriminal.info, Romanov shares his fears with Stepanyants about Dvoskin’s calls. Between themselves, they call him Bald.

M - Listen. The bald one calls me in plain text on the phone ... What is he, completely crazy? I have Andrey Novikov on this phone.

Kommersant - How do I know? You say that to me, but he didn’t call me.

Kommersant - What are you saying to me? He did not call me even today.

Kommersant - Yes, this is his number.

M - Fuck knows, I took a break and I don’t understand whether he is or not.

Kommersant - This is it.

M - I said that you will now re-learn it. What twenty percent does he ask to hide behind? What will he cover there?

Kommersant - How do I know?

M - If he doesn’t want, then let him return everything that they gave back. It will work out, say that we will come and pile on him yet.

Evgeny Dvoskin demanded 20%, just from the amount of 100 million rubles stolen from Novikov.

Kommersant - No, I didn’t call because I’m doing business.

M - He's crazy talking on the phone! Firstly, such things are discussed on the shore, and secondly, who does he want to cover up for? Let him speak as is, who came by general power of attorney. What are some problems?

Kommersant - Mishanya, I have not talked yet.

M - You tell him that such blackmail is fraught with danger, right in Ramenki and we’ll bury it. So tell me exactly what you said: “If he opens his mouth, then we’ll break our legs right in Ramenki and leave us there. We’ll have to - we’ll come to his leadership and ...” These are the literal words of Ali and literally tell him to you. If he again grunts on the phone, he will get right in the area.

In this entry, the continuation of the conversation about the demand of Dvoskin regarding 20%. Ali is Ali Zakriev, a shadow banker close to Adam Delimkhanov and familiar with Ramzan Kadyrov. Dvoskin was not yet the “savior of the banking system of the Crimea,” so they communicate with him without much respect.

M - Let us give the cops their “A” and “B”. If these are living working people now, then we will really punish them financially, we will take money from them and share with the garbage. Then we’ll show with our fingers who, and not just with our fingers, but with a mane we’ll bring. Let fellow countrymen come, I nevermind who, we’ll come and bring along.

Kommersant - I just handed it over.

M - When will the information be? Tomorrow?

Kommersant - I think so.

Kommersant - We sent it to FIG and loaded it at minus two million.

Kommersant - Yes, they said in this situation: “Hey, hell, you fucked up a criminal, two directors are ...” Now, I'm sorry, please, I will go out.

M - Why are they being loaded? Denominations are not loaded now.

Kommersant - I’m in the La Marais on Malaya Gruzinskaya. We told him that the two directors are under this, but they really are under forty-eight hours. We said: "This is your omission, and we’ve booted from you minus two million."

M - I am most importantly worried that they do not take the one who came by proxy.

Stepanyants informs Romanov that he agreed on everything and the issue will be resolved through corrupt police officers. He also reports that Dvoskin was denied a percentage of the amount, they took another 2 million from him for failure to fulfill obligations under another situation. 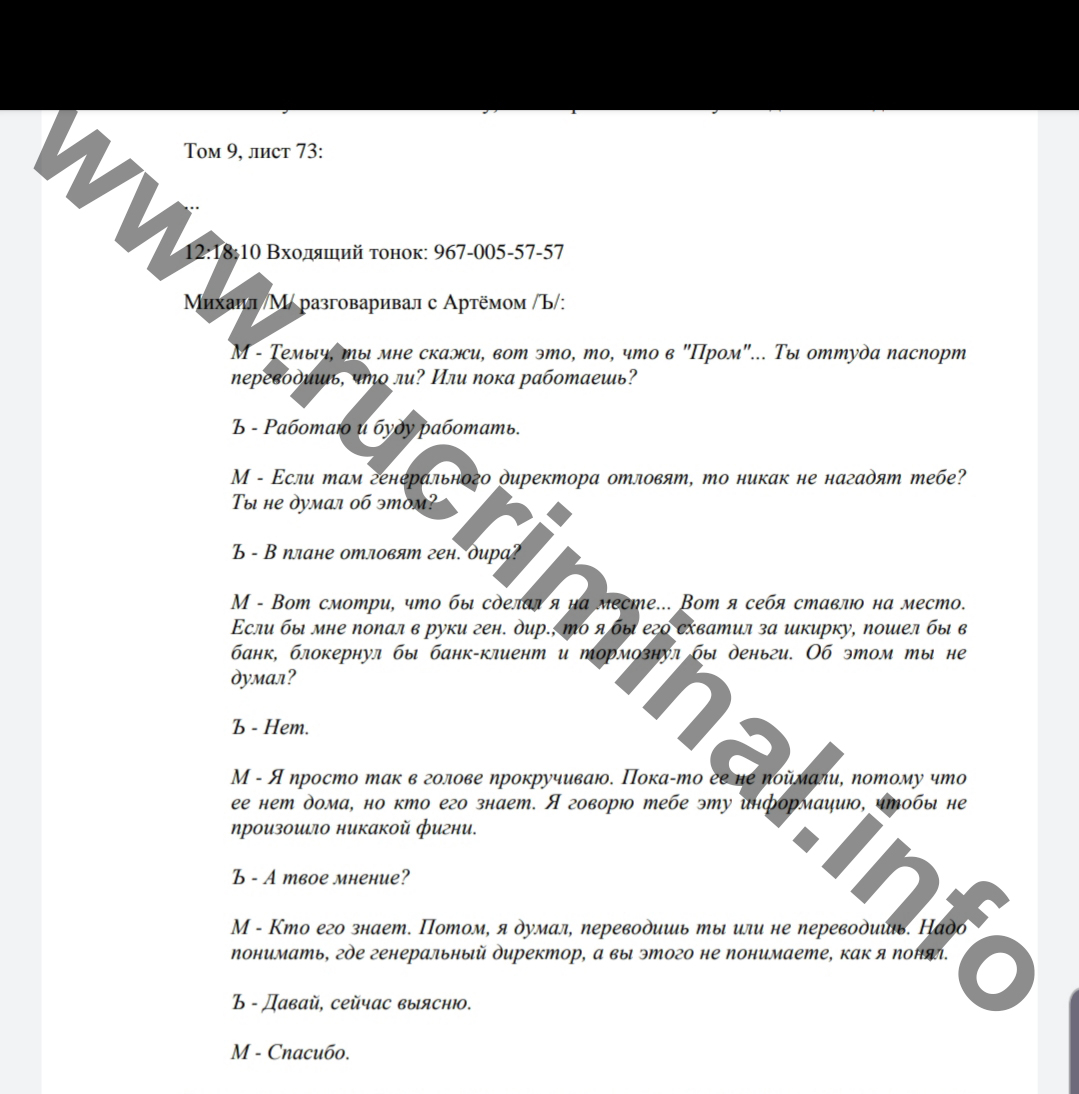