The fate of the shadow gas intermediary Fuad Uzbekov

The grandson of the first president and leader (elbasy) of Kazakhstan, Nursultan Nazarbayev, 29-year-old Aisultan Nazarbayev threatens to talk about the whole backstage relationship between representatives of Nur-Sultan and Gazprom. This causes serious concern in the person who built all these relationships - in Fuad Uzbekov. This is a shadowy and non-public businessman with a very interesting biography. Rucriminal.info continues to talk about the fate of Uzbekov.

While working in the Kazakh representative office of BUCHHAMMER, Fuad Uzbekov has well mastered how to get large profits from taxation, including European ones. With this direction is his next job. In 1993, he became director of the Limassol branch of Karich Bank. This bank belonged to the omnipotent Yugoslav family of Karicha. Its representatives back in the days of the USSR had the opportunity to conduct business in the countries of the socialist camp and even created the first joint venture in the USSR. Karichi (leader Bogolyub Karich) managed to make friends with many prominent party functionaries, including Nikolai Ryzhkov and Nursultan Nazarbayev. After the collapse of the USSR and the social camp, it was the Cypriot branches of Karich Bank that became the place where the money withdrawn by all these prominent former party members flocked. Through it, they invested in various objects, enterprises, etc. worldwide - from South Africa to Canada. Of course, first of all, the bank served a close friend of Karicha Slobodan Milosevic. When the Milosevic regime collapsed, some members of the Kariche clan were forced to leave the country and settled in Russia, Belarus and Kazakhstan. They continue to conduct business everywhere, including construction. Milanka Karic is the consul of Kazakhstan in Serbia. Bogolyub Karic managed to return to Serbia, where he led his political party and plays a prominent role in this country.

According to Rucriminal.info sources, Uzbekov’s tasks at Karich Bank included monitoring the safety and proper investment of the capital of former party members from Kazakhstan and Russia. In 1995, Fuad Uzbekov left Karic Bank.

And immediately became the general director and co-owner of CJSC National Gas Company. The second co-owner of this company was Seoram LLC, whose sole founder was Andrei Meshcheryakov. However, Meshcheryakov is not an independent person. He was the confidant of the very Nikolai Pavlovich Laverov, a student of Minister Uzbekov. Laverov personality is unique. From January 15 to August 28, 1991 - Deputy Prime Minister of the USSR. From 1991 to 2013, he was vice president of the Russian Academy of Sciences. Almost until his death (in 2016), he was the Deputy Chairman of the Board of Directors of Rosneft, a member of the Board of Directors of Rosgeology, etc. The full holder of the Order for Merit to the Fatherland. By its weight and “authority” Laverov can be safely compared with Primakov. He was an influential man, before whom the doors of any cabinets opened.

It is clear that such a well-deserved person with gigantic ties and considerable capital should have a decent pension fund. According to Rucriminal.info sources, Meshcheryakov and Uzbeks began to be responsible for its formation. It is clear, not forgetting about their own interests, as well as the interests of a number of other persons. The main thing is that the name of Laverov could be used as a battering ram, and one call was enough for him to overcome the problems. In a short time, a lot of companies were created in Russia, the core of which were companies with big names - “National Gas Company”, OJSC “NATIONAL OIL AND GAS TECHNOLOGIES”, CJSC “National Oil and Gas Technology” (from 1999 to 2002 CEO Fuad Uzbekov), which began to crush entire enterprises for themselves, for example, the Sintezkauchuk factory, the Tula dairy factory, the Tula wine-making company, the Stupinsky fiberglass factory, the NPO Composite, the Yuriev Kamen group of companies and so on were in the interests of the Laverov team .d. this sleep c can be listed very long time. It's about a dozen major companies, which have been captured (obtained) fully (or partially) "command Laverov", the main representative of which at that time was Fuad Uzbeks.

Some of these assets remained in the "pension fund", some were sold, some were seized under the "flag of Laverov" in the interests of Uzbek client-friends. Among the latter, for example, there was authoritative businessman Alexander Shoror (later arrested for the murder), Yugoslav businessman Savo Kuyundzhich (he was also arrested), thief in law Valery Kheifits (Doctor, died in 2009), etc. 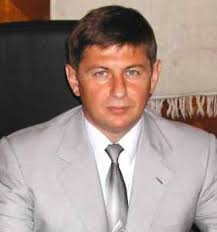 At the same time, Fuad Uzbeks have openly criminal areas of activity. Since part of the seized enterprises (for example, as NPO Composite and Stupinsky Fiberglass Plastic Plant) are defense, there was talk of selling them a number of secret documents to these enterprises to the West. It is known that he participated in a muddy deal to sell 40 kg of platinum abroad from one of the enterprises.