On Saturday, February 29, in the Nagatinsky floodplain, the first in Russia and the largest in Europe indoor theme park "Island of Dreams" will open. Sergei Sobyanin immediately tried to show that this is one of his most important achievements. And even Vladimir Putin was invited to the opening. However, here Muscovites and guests of the capital of enthusiasm from the "Island of Dreams" did not experience. In their opinion, instead of the “Russian Disneyland,” they ended up in another shopping center, which differs from the others only in size (the attraction is present in a number of shopping centers in the Moscow region). However, this is not surprising. Amiran and Alikhan Mutsoev, the children of the State Duma deputy Zelimkhan Mutsoev, lead the holding company Ostrov Dreams. The family business, among other things, is the construction of shopping centers. For example, the Mutsoevs have long been building networks of the June and Siberian Town shopping centers. So this time, the Muscovites “got into it” under the guise of Disneyland "another Gardener only with entertainment. Even with the price of a family ticket of almost 10 thousand rubles. The most amazing thing is the partners that Sergei Sobyanin chose for this high-profile project. As already said Rucriminal.info, the Mutsoev family has long been closely associated with "thieves in law" and the mafia. 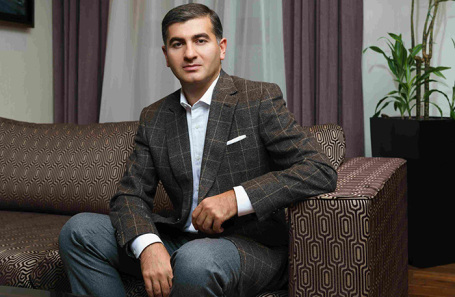 It is known that he is a billionaire, but it’s hard to understand how he made a gigantic fortune at an early stage. Only now I sewed down jackets and soon the owner of factories. It can be assumed that Mutsoev had powerful partners in certain circles. Let us turn to the video of the magnificent celebration of the birthday of the “criminal general” Rudolf Oganov (Rudik Bakinsky), which took place on December 15, 1997. On the frames you can often see a gray-haired man with a magnificent mustache, to whom the mafiosi are treated with great respect, as an equal.

Here the barbel comes into the hall, shakes hands with Rudik, hugs and kisses him (video one-06.12-06.50), he is led to the table, where he greets other mafiosi, exchanges male kisses with the thief in law Mamuka Mikeladze (06.38). For a longer time, the operator removes how honorable guests communicate nicely with neighbors on the table, all of them gangsters. (07.38-08.02).

This man with slightly graying hair and a magnificent mustache can be seen at the table with the most honored guests, to whom the birthday man Rudolf Oganov constantly sits down. Near the barbel are all Rudik’s closest friends - thieves in law Dzhemal and Mamuka Mikladze (Dzhemo and Mamuka), Roman Jafarov (Romik), Givi Gordeladze (Givi), Nodar Farizyan (Nono), etc. (two videos - from 0.00 to 0.08). From the behavior of a mustachioed man it is clear that he is Oganov and other mafiosi, his own, like all the thieves in law in the hall. Barbel is very cheerful, hugs with Rudik and guests, raises his glass, claps loudly toasts, such as: "For Rudolf Sergeyevich, goddamn!".

Towards the end of the festival, "thieves in law" are embarking on incendiary Caucasian dances to the song "Thieves' Share". And then a mustachioed guest joins their round dance, who walks in a circle arm in arm with Rudik, Vladimir Oganov (Vachikos Shestipalyi), Revaz Tsitsishvili (Tsitska), the Mikeladze brothers, Nono (three videos from 07.11 to 07.48). In this round dance, everything is just “thieves in law” and, of course, you can decide that the barbel is also a prominent mafia. But no. According to Rucriminal.info, this is our main character, the current State Duma deputy from United Russia, Zelimkhan Mutsoev.

Rudolf Oganov was killed shortly after this birthday. He died in a battle with his main enemy “thief in law” Aslan Usoyan (Grandfather Hassan). Aslan Usoyan, the killer shot in 2013. In complicity in his elimination, a "thief in law" (now his status is suspended) is suspected of being Dzhemal Mikeladze (Dzhemo), who is at the same table with Mutsoev.

To replace Grandfather Hassan came another “thief in law No. 1” - Kurdish Zakhar Kalashov (Shakro young). Its headquarters was the building of the former Golden Palace casino. This gambling establishment since the 90s under the control of this "thief in law." And here is a photo of Zelimkhan Mutsoev (also a Kurd) along with Igor Ballo, president of the Association of Gaming Businesses, vice president of the Assyrian League of Russia at the opening of Ashur Golden Palace casino in Iraqi Kurdistan. Shakro Young has always supported Iraqi Kurds, both in money and in entertainment venues.

It should be noted that this is not the end of Zelimkhan Mutsoev’s connection with the mafia. It turns out that in 1998 the brother of the deputy - Mutsoyev (Mori) Amerkhan Alikoevich, was listed in the bases of the Ministry of Internal Affairs of the Russian Federation as a "thief in law."