As an overseer, Zurab Afalunov “handed” the singer to Raul Arashukov 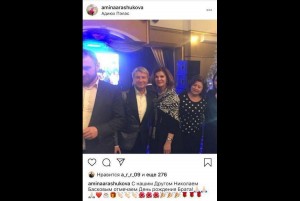 The history of the celebration of the birthday of the former "gas king" of the North Caucasus Raul Arashukov, which took place on a huge scale on the eve of his arrest, is becoming increasingly interesting. The “golden voice” of Russia Nikolai Baskov spoke before the audience. It turned out that this was one of the gifts from members of the Arashukov clan. The singer was bought together, and the largest contribution was made by the prosecutor Zurab Afaunov. On January 18, 2019, the birthday of the eldest member of the clan, the former "gas king" Raul Arashukov, was held at the Arashukovs family estate, SPA Hotel Adiyuh-Palace (Karachevo-Cherkessia). He was 59 years old. Clan members close to Raul and Rauf Arashukov gathered law enforcers and officials. All of them congratulated the birthday man, gave him a present. The participants were entertained by Nikolai Baskov, who sang and also acted as the host of the event. As it became known to Rucriminal.info, its services cost 120 thousand euros. Basques are usually more modest. But this time there was a big margin for Nikolai having to perform dual functions (performer and presenter), and the event was not even a corporate event, but a private birthday in the mountains.

In recent years, Raul Arashukov has very peculiarly approached his similar holidays. He previously conveyed to his relatives what was necessary for the event and they were informed about what exactly the wishes of the head of the clan they should pay. This time, the elderly gas king wanted Baskov, and people from the Arashukovs' circle began to take off at him. The largest donation - 1.5 million rubles - was made by the head of the prosecutor's office of the KCR, Zurab Afaunov. Such a large contribution from the supervisor was not accidental. In the fall of 2018, the Deputy Prosecutor of the KCR, Igor Darmilov, was transferred to the KBR, other shifts were planned. In connection with the release of a number of posts, Raul and Rauf Arashukov promised Afaunov a significant promotion. Therefore, Zurab took a place at the festive table closer to Raul, next to his friend - Kazbek Bulatov, deputy chief of the Investigative Committee of the Investigative Committee (now under arrest). Arashukov Sr. during the celebration promised law enforcement authorities that he would be promoted soon, and also spoke of the need to rally in the fight against “enemies” trying to reanimate investigations into the murders of politicians Aslan Zhukov and Fral Shebzukhov and stealing gas money.

And in this struggle, Zurab Afaunov was given a significant role. For a long time he did not give way to numerous complaints of the relatives of Zhukov and Shebzukhov on the inaction of investigators. (Recall that both crimes were committed by “order” of Rauf Arashukov, he was charged accordingly). Afaunov’s efforts also blocked the investigation of the theft of money paid by a number of large enterprises for gas. They officially paid only half the cost of gas consumed. The other half of the gas was actually stolen, and Arashukov monthly issued large amounts of cash for “closed eyes”. These amounts were collected by one of the closest people to Rauf Arashukov - the head of Gazprom Gas Distribution Cherkessk Guzer Khashukaev. Also, Khashukaev is a relative (husband of his sister) Zurab Afaunov.

From the flows of money that poured into the treasury of the Arashukovs, the “trickle” also went to Afaunov. They were supplemented by funds earned by Zurab on his own in prosecutorial posts (of course, this is not about official salaries). The result was a significant amount. Non-poor Afaunov has good assets that individual businessmen might envy. In particular, he owns 25% of the shopping center "Orange" (Cherkessk, Kavkazskaya St., 30), as well as a number of gas stations. Zurab is also currently building a luxury mansion in the center of Cherkessk (13 Tupikovy Lane), the cost of which, together with the land, exceeds 30 million rubles.