“Unable to bear the pain, he named the passwords”

How they took the gang Don't wake 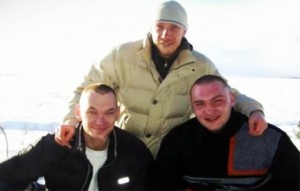 Rucriminal.info continues the epic about the gang of the once one of the most sinister Lyubertsy "authorities" Mikhail Mikhailov, nicknamed Don't wake up. He got it for the corresponding tattoo made right on the eyelids. In the second part, we will tell you how the gang members got caught. As almost always happens, the guys got burned on stupidity. And if it is absolutely accurate, then on greed.

The golden autumn of 2008 was in the yard. Under unspecified circumstances, the heroes of our today's story became aware of a large amount of cash stored in one of the currency exchange offices in the Novogireevo metro area. In addition, they became aware of the employees working in this exchange office. Immediately after that, the kids decided to commit a robbery attack on the cash vault. But it was not just a robbery from the dashing 90s. There was ingenuity, cunning and even fiction here.

Having found out everything necessary, the guys moved on to action. In accordance with the developed plan, Balashov Gennady for several days followed the senior manager of the bank branch in order to establish the time of his arrival and departure to the workplace. Having collected all the necessary information, having held a rehearsal at the site of the future attack, we decided to go to work.

The operation has begun! On one of the first days of October 2008, at the end of the working day, the senior manager of the bank turned on all security systems, closed the exchange office and headed home. Having parked the car at the house, the manager went to the entrance. Directly near the entrance to the gate, on the territory of the house, there was a Gazelle, into which boxes were loaded. The Gazelle stood in such a way that it blocked the entrance to the gate. In this connection, the manager was forced to bypass the Gazelle in such a way that he was directly near its open side doors. Having caught up with the doors of the Gazelle, the manager felt that he was grabbed sharply and very strongly, and pushed into the Gazelle. It happened at lightning speed and the manager did not have time to call for help. Once in the back of the Gazelle, the manager was tied to a chair with tape. After that, they immediately began to beat him, demanding to give passwords to turn off the alarm at the exchange office. The manager claimed that without his personal presence it was impossible to get into the right room. However, blows to various parts of the manager's body continued. Unable to bear the pain, the manager named passwords for security systems and algorithms for their introduction. After that, everyone together went to the right address. Once there, the manager was left in the back of a Gazelle along with two accomplices, while the other defendants went to the exchange office. Having entered the premises of interest, the bandits began to put cash in large market bags. The theft of money itself took no more than 2 minutes. Returning to the car with the booty, they quickly retreated from the crime scene. On the way, the manager, along with the chair, to which the latter was securely attached with adhesive tape, was thrown into a ditch. The manager lay in the ditch for about 2 hours. All this time he was shouting: GO-GI-TE! The manager's screams were heard by passers-by. The latter released the manager, provided the necessary assistance and called the police.

The booty of the robbers was 26 million rubles. With the booty, the bandits went to the office, which belonged to the gang members (we will talk about this office in detail in the following parts). Where they began to divide the loot. 4 (four) people were directly involved in the robbery. Namely: Gumnikov A.S., Drozdov A.M., Schipantsev S.A., Gomygin M.V. The indirect participant was Balashov G.A., who monitored the manager before the attack. Who and how much received the money is not exactly established. But the share of one participant is known for sure ... ..

Everyone was satisfied with the outcome of the work done. Except Gena Balashov. The crocodile, which is exactly what Balashov was called by his colleagues, received only 10 thousand US dollars. That on the day of the commission of the described crime was approximately 270 thousand Russian rubles. Balashov, as he later wrote in his confession, did not even understand how and what to do with his "wealth". Gennady was afraid of other participants in the attack. In this connection, he could not decide to insistently ask for a decent share. The resentment and annoyance of the unfortunate robber knew no bounds. He could not put up with the handout thrown to him like a dog. And the Crocodile decides, as he thought at that moment, on a cunning step ... ..

Having learned the phone number of the manager, yes, yes, the very one who, against his will, was riding a chair in the Gazelle. Balashov Gena offered him to sell the data of those who robbed him for a certain amount of money. Not believing his luck, the manager even doubted the veracity of the potential seller. But, after a short dialogue about the details of that sad day for the manager, the latter realized that the seller was in possession of the declared information, and offered a meeting. And at the meeting, instead of the desired 100 thousand dollars, Gennady was expecting the “Warm welcome” tariff plan. Balashov was detained by officers of the CID of the UVD of the SEAD. In what key do you passThe conversation between the police officers and Balashov is unknown. Officially, no procedural or investigative actions were carried out with Balashov at that time. Balashov was released the same evening. And after a while Drozdov Andrey was detained. No measures were taken with Drozov aimed at confirming his involvement in the robbery. Moreover, on the same evening Andrey Gumnikov handed over 200,000 US dollars to officers of the Department of Internal Affairs of the SEAD of Moscow. After which Drozdov was released.

The next day, Balashov was invited by the staff of the CID of the UVD of the SEAD of Moscow for a conversation. During this conversation, police officers told Balashov that he had given them false information about Drozdov's involvement in the robbery. Adding at the same time that the victim did not identify Drozdov as the person who committed the crime against him. At the end of the conversation, the police officers advised Balashov to “get lost” for a while from the Moscow region. After that, they took Gennady to the Kuzminki metro station, where, after dropping him off, they left. Balashov, in turn, understood why Drozdov was "not involved", and decided, or, most likely, they decided to write a statement for him. Yes, not just write a statement, but compose: an autobiography - a statement - a confession on 27 pages. For some reason, he wrote a statement addressed to the head of the 23rd department of the Criminal Investigation Department of the Main Internal Affairs Directorate of Moscow, police colonel Sakharov S.V. Balashov did not submit this application to the duty unit and did not even send it by mail. Balashov left his information bomb in a storage room at the Leningradsky railway station, and he left in an unknown direction. In the future, he "accidentally" informed about his application and its location precisely about / at the 23rd department of the 7th ORCH of the GUVD of Moscow. By whom it was discovered and seized from the storage room of the Leningradsky railway station in Moscow. It is worth noting separately that Balashov's statement of February 26, 2009 is simply bound to appear in criminal law textbooks as an unprecedented and unparalleled case.

It didn't take long to search for the grief of the "witness". He found himself. Yes, not just somehow, but with a twist, well, as we love. The manager never gave the money to Gennady for information about the robbers .... But he promised. Well, Balashov decided to remind himself. Like, the debt is red in payment. The poor victim (the same manager), taken aback by such impudence, promised to call Gennady back. And he, in turn, reported the “good man” to the operatives. After a short period of time, Balashov was detained in the city of Stavropol. After that, he was taken to Moscow and placed in a pre-trial detention center.